Home Mobiles Carriers The OPPO Reno leaks again, this time in a hands on video

The OPPO Reno, which we are speculating will be one of Telstra’s first 5G phones is getting all kinds of leaky. We saw OPPO send out a teaser themselves but it hasn’t ended there with a hands on video showing off the device today.

As you can see in the video below the Reno arrives with a standard flat display and not a curved display. There is not a notch or cutout anywhere in sight suggesting that the Reno will arrive with a popup camera, something they have already done this year with the F11 Pro.

The full screen display looks to be very similar to that which we saw on the Find X last year with their VP Shen Yiren Brian suggesting via his Weibo account that the bezels will be extremely similar between the two devices. This can be seen in the image he posted below: He has also revealed some colours for the Reno with the colours being variable depending on the light angle on them — which fits from the video from this morning where they are pouring more than one colour into the phone. Reno will also support Dolby Atmos high res audio and will come in at least two variants, one a Snapdragon 855 and one a SD710 with a 48MP Sony camera. 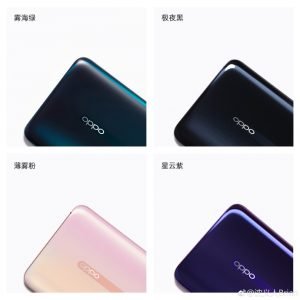 The Reno will also include NFC and will have a “large battery for long battery life” along with SuperVOOC 3.0 which is a new technology on top of their SuperVOOC charging. SuperVOOC 3.0 will reduce the charging time even further by 23.8%, something that should not be sneezed at considering how fast SuperVOOC currently is.

Along with all that throw in some 5G, a periscope lens that provides 10 x lossless optical zoom and a new version of ColorOS and they may well have a hit on their hands. Telstra will hopefully price this well so that it is accessible to all on their 5G network.

Makes you wonder where the Find X2/Z will go this year to better this — 2019 could be another great year for OPPO.