Home Mobiles Huawei head back to the top of the DxOMark list with the...

Last year Huawei jumped the shark with the P20 Pro with its photography being generations ahead of the other smartphone cameras in the market. Since then they have been equalled by the Samsung Galaxy S10+ at the top of the DxOMark scoring. Overnight they released the P30 Pro and are once again are the pinnacle of smartphone photography.

All along Huawei were teasing the capabilities of their new flagship and the P30 Pro and it seems that they were not mistaken with how good it is. DxOMark have published their thorough review of the camera on the P30 Pro both front and rear cameras. The front camera is where the P30 Pro excels.

We have discussed the camera in the announcement and hands on pieces this morning so let’s skip right to the meat of the review – the results. We will be publishing an in-depth camera piece in the next couple of days so keep an eye out for that. 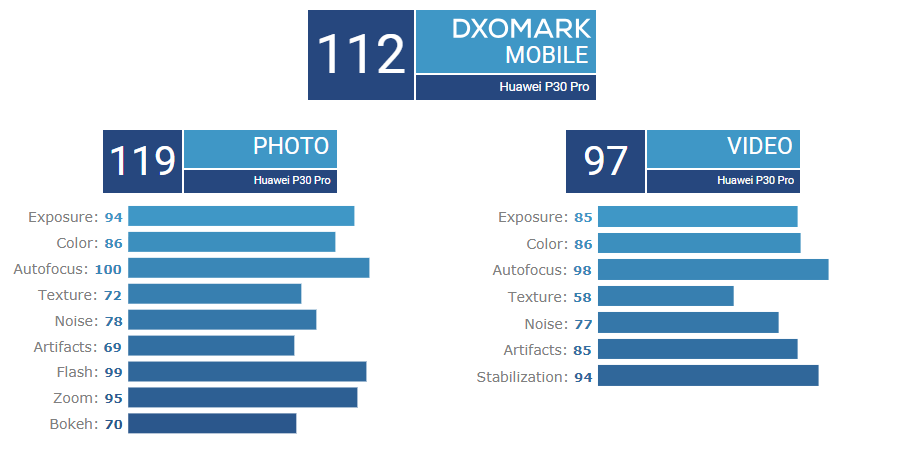 The P30 Pro scored a whopping 119 for photo and 97 for video giving an overall score of 112, three clear of it’s closest rivals. DxOMark found big improvements in the bokeh and zoom functionality of the camera with it setting new benchmarks in the zoom area thanks to its 5 x telephoto camera with folded optics. It also excelled in bokeh due to the ToF sensor allowing for more precise depth maps.

The low light photography was best in the DxOMark comparison test with the P30 Pro recording “higher levels of detail than its closest competitors across pretty much every light condition”.

The autofocus was fast and accurate and there was good exposure in all lighting conditions.

There was a few negatives in the review including a “slightly limited dynamic range can result in highlight clipping” and a range of image artefacts.

The video score was good with very good stabilisation and good exposure but there was strong noise in low-light videos.

We have included a few photos taken by Chris with a P30 Pro in Paris to demonstrate the quality of the camera:

DxOMark have recently started performing front camera reviews as well and the P30 Pro scored a decent 89 for this – the Pixel 3 scored 92 for its front-facing camera.

The front facing camera on the P30 Pro apparently had good exposure with a wide dynamic range with well-controlled noise. There was however low detail indoors and in low light but they aren’t the only front-facing camera to have these limitations.

The end result is a chart topping 112 DxOMark score. Huawei have once again set the bar, and set it extremely high with the camera in the P30 Pro. Now it is up to all the other manufacturers to chase Huawei again. Rules rewritten indeed

Ausdroid is in Paris with Huawei to cover the P30 series launch event.