Amazon is looking to turn this around with their new Echo Sub which is optimally paired with any second Gen Echo or Echo Plus speakers. Amazon sent us an Echo Plus to pair with the Amazon Sub and we set about testing it with a variety of music and against a couple of other speakers or the smart variety. 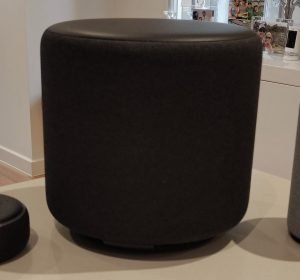 When did we get a new ottoman?

The Echo Sub is like a small ottoman, or a massive speaker. At 202 x 210 x 210mm it is certainly a decent size but is still a LOT smaller than by Sonos Sub. Weighing 4.2kg it certainly has some weight to it. It is very Echo shaped, as you would expect it to be, but is all black. The outside is material around the sides with a solid plastic on top.

There is a distinct lack of buttons or controls for the device on the outside – it is controlled as part of a sub pair on the Alexa app. The rear of the device has the power in socket and an “Action” button that does nothing except reset the sub. 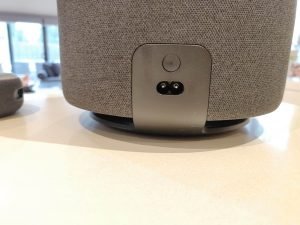 It’s what’s on the inside that counts

The hardware is fairly simple. Inside that black pouf is a 6″ downward-firing woofer which results in a 100W Class D amplifier. The low frequency response is 30Hz (-6dB) with the crossover frequency 50Hz – 200Hz adaptive low pass filter. There is no way to alter the filter or frequency response – it just plays or it doesn’t. 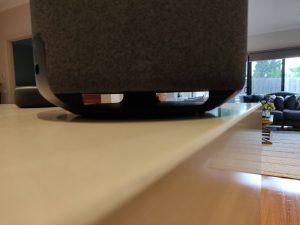 The speaker supports Wi-Fi 802.11 a/b/g/n (2.4 and 5GHz). There is NO Chromecast support for any of the Amazon speakers and I don’t see that changing any time soon. Amazon and Google don’t exactly get along …

How does it sound when paired with the Echo Plus?

We tested the sub pair of the Echo Plus and the Echo Sub out on a variety of music including Metal, Hip Hop, Dance/Trance and Pop. We also compared the sound to that coming from the Sonos One paired with a Sonos Sub.

The bass the Echo Sub added to the Echo Plus was significant. It obviously really pumped out on the Hip Hop and the “drop” of the dance/trance (so my 13yo daughter said anyway – it didn’t make it sound any better to me but I appreciated the difference in sound). The bass added was a dull thud but wasn’t as crisp as some subs I have heard.

Compared with the Sonos One/Sub pair the sound was not even close – and it would have really surprise me if it had, the Sonos pair is worth close to a thousand dollars more. The Sonos sub produced a crisper, deeper, louder bass without overpowering the music. In saying that the Echo Sub produced a sound that was at least close to comparable — loud enough and deep enough.

How is the experience using the Echo Sub?

Setting the Sub up was very easy. Opened the Alexa app, added a speaker, it found the Echo Sub: although it would have made it easier if Amazon had called it Echo Sub as device name when it appears in the app. I was setting up the Echo Plus at the same time so had both appear at once and could not distinguish one from the other.

Once the app finds the Echo Sub you then use the app to create a Sub pair and join the Echo Sub with whichever Echo device you have nearby that is on and is compatible. You can then play music onto this sub pair using the Alexa app or compatible app. This is where my issues occurred.

Amazon have a VERY closed in-walled garden. The Alexa app only supports playing music from Spotify (premium account only), Tunein, iHeart Radio and Amazon Music. Not very friendly if you don’t happen to have these- let’s face it, who actually uses Amazon music (and I’m not surprised, its UX is a mess both on the phone and on Android Auto). After signing up to a free 30 day trial of Amazon Music I was good to go (OK Google, remind me to cancel Amazon Music trial in 29 days).

With a compatible app the music is easy to play on the Sub pair by just selecting the relevant speaker to “Cast” to it.

Don’t let this name confuse you, though, this isn’t Google / Chromecast. This is Alexa Cast, which pretty much only supports Amazon services, and some limited devices.

Putting the lack of music app support aside the speakers were easy to use, especially if you are used to using Chromecast etc with other speakers and devices.

So who is it for?

The Amazon Echo Sub is not for audiophiles – although if you are a true audiophile there is no doubt you already have something a lot more expensive and better than this.

It is designed for people who already have a compatible Amazon Echo speaker and want to make the music coming out of it just that little bit better. To give that sound a bit of kick. If you have a compatible Echo speaker already then the outlay of another $200 from Amazon is a small price to pay for a much deeper, more thorough sound.

If you are in the Google ecosystem and do not own a compatible Echo speaker then you may not want to fork out for this as you would have to buy this plus another Echo speaker making it very pricey and not worth the investment.

On the other hand if you already own a compatible speaker and want better quality sound without paying an arm and a leg for it then I can recommend the Amazon Echo Sub for you.