Wear OS smartwatches have stagnated and are not the greatest product ever produced by Google. Truthfully, they’re far from it. There aren’t too many other options for the majority of the world’s smartphone owners – Android owners.

Fitbit is one company hoping to fill that need that many of us have for a smartwatch but can’t seem to find one that fits the groove. Last year the company released the Fitbit Versa, their first true smartwatch and one which obviously had the touch of the Pebble team in its design. This year they have released a slightly lower-end smartwatch with an extremely similar design – the Fitbit Versa Lite Edition. 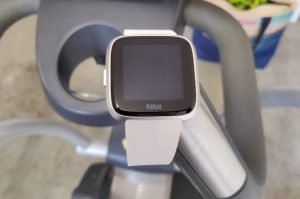 After testing out the Fitbit Versa last year we jumped at the chance to check out the Versa Lite Edition when the opportunity arose. Read on to find out what we thought of it and the difference between the two Versa iterations.

Does it look different?

Does it have Lite internals?

The display is still a square 300 x 300 pixel resolution display with a diagonal screen size of 34mm. It is protected with Gorilla Glass 3 so there is some protection or everyday bumps and scrapes.

Unlike the Versa the Versa Lite Edition lacks the inbuilt memory required for storage of music onboard – this did not concern me at all, as who really listens to music from their watch?

It does still have a heart rate sensor to monitor your heart rate 24/7 and help track your sleeping. I loved this as before on the Versa and has really given me some insights into my lack of sleep and how woeful the quality of it really is.

The Versa Lite Edition does NOT have an NFC chip inside and thus cannot be used for contactless payments or anything else NFC related.

The battery is stated to last four days and yes I can confirm that this is accurate. I was able to get a tick over 4 days of life from a single charge when wearing it 24/7 and having HR monitoring on the entire time. Charging the watch took around an hour and I did get the usual notification on my phone and via email to tell me when the battery was getting low — you can see it on the watch too of course.

There is also no GPS built in so if you want to track your run or walking course you will require your phone with you. Swim lap tracking is gone as well due to the three-axis gyroscope being left out. Also missing the cut is the altimeter so you will have no idea now many floors you have climbed with the Vera Lite Edition.

Lastly, it is also lacking Wi-Fi, so it’s Bluetooth to your phone or nothing.

But can it still track my fitness variables?

The answer to that is – it depends on what you want it to track. It will not track your laps while swimming but it is swimproof, nor floors climbed but it WILL track your steps, your moving minutes, some exercises (running, cycling, walking, treadmill, weights etc), and female-specific health tracking.

The more detailed on-screen workouts that came with the Versa are gone, likely due to a lack on memory inside.

If you don’t care for these more advanced tracking requirements and just want basic tracking, then this could be the watch for you. Personally, even though I love to stay fit and go to the gym a lot, I don’t need a device to tell me how many sets I’ve done nor how many calories I’ve burned (I can figure that out for myself) and definitely not telling me what exercises to do (I know what works for me) so this was right up my alley. 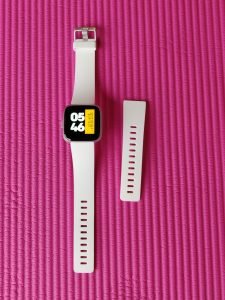 Is it really a smartwatch and not just a fitness tracker?

Its a bit of one and a bit of the other. As a fitness tracker it is a good tracker (not great due to the things mentioned above missing) and as a smartwatch it is middling.

Replying to notifications? Check, but with a disclaimer. Only pre-prepared replied which can be made within the app. This is new since I reviewed the Versa so it was nice to be able to customise the reply that is sent. If you want to change your reply on the fly there is no way to do that — it is not Wear OS. 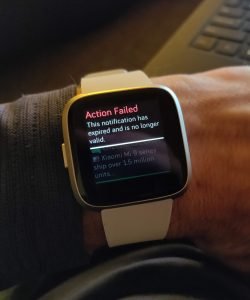 As I type this there is still a Whatsapp message from 8 hours ago that I read and replied to on my phone. Eventually they must disappear as there are not thousands on it at the moment, but I have not figured out the rhyme nor reason behind it.

Sending a message from scratch? Nope.

As I said it is a middling smartwatch but the display and OS is very responsive so the notification issue was NOT an issue that prevented me from liking it. Considering some smartwatches don’t let you interact with notifications at all, this isn’t bad.

Is the app and software any good?

The app is the same as it was on the Versa with a few small upgrades along the way so if you want to know more head on over to the Versa review and check that out.

The app is good, possibly the best fitness tracking app I have used.

The software on the watch is also the same as the Versa and in a nutshell it is more responsive and faster than Wear OS – not that this is difficult today, it feels like Google has basically forgotten about Wear OS (just like the customers).

Does it give me the feels?

Yes I hate that word too but this watch I definitely do not hate. Let’s face it, most people do not need the advanced tracking that the Versa brings and thus to be offered a “light” version of the Versa for a cheaper price and yet can still do all that you need is a great idea.

The only issue I had was with the replying to notifications and swiping them away. I am sure it is just a small software bug somewhere that can be fixed but it certainly was not a deal breaker. The notifications just stack up and when you swipe down on the watch the most recent one appears first — that’s the only one you want to see.

The Fitbit Versa Lite Edition has a RRP of $249, $50 less than the Versa. I’m not sure whether that is enough discount to be honest. It lacks a lot more from the Versa than $50 would suggest. If it came in around $200 then it would be a no brainer but at $250 I would nearly suggest you save a bit more or wait for a sale and grab the Versa. 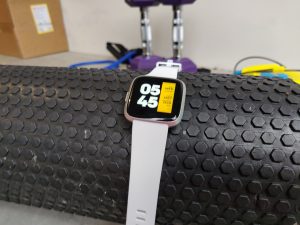 In the end the Fitbit Versa Lite Edition is a decent smartwatch and a decent fitness tracker — decent enough for me. It did just about everything I wanted it to and for a majority of people out there it will most certainly be enough. For them I think they should have a look at the Versa Lite and weigh up that $50 difference in value before determining which Fitbit Versa variation to buy — both a good smartwatches.

You can check them out in person at all shops where Fitbits are sold and also online at the Fitbit website.

Fitbit has allowed Ausdroid to keep this device for long term monitoring of progress.