Home Mobiles Meet the Samsung Galaxy A80 and A70, Samsung’s new top of the... 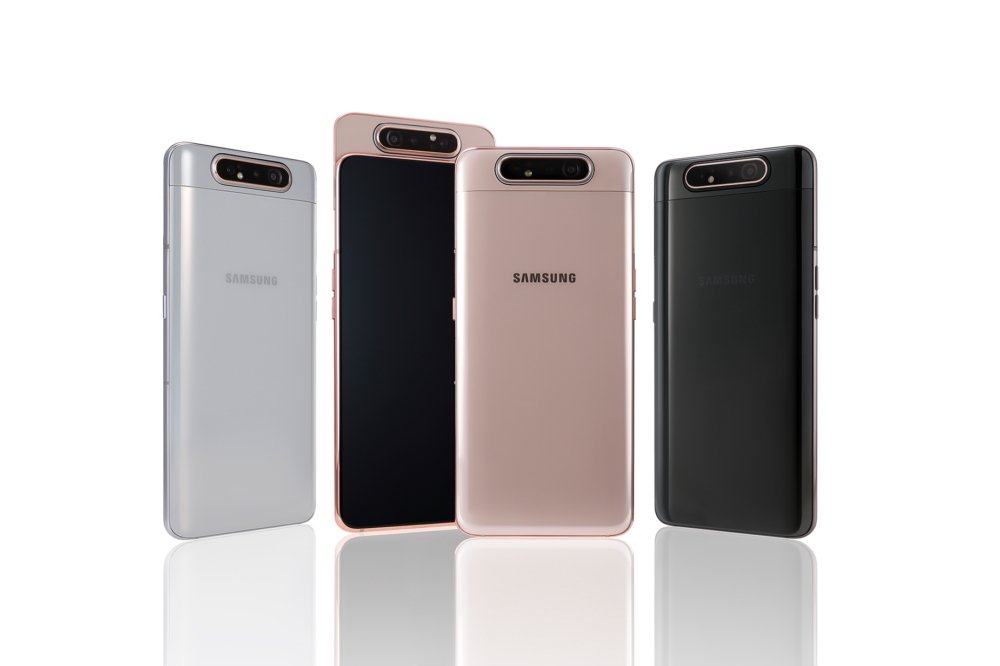 Samsung took to the stage in Bangkok overnight to announce the latest devices in their A series of phones, the A80 and A70. Both of these devices have upped the ante on what it means to be a mid-range device with many of the features from the S10 making their way into these phones.

The headline feature of the A80 has to be its rotating camera, featuring a triple camera set up with a 48MP, f/2.0 main sensor, an 8MP f/2.2 Ultra Wide sensor and a 3D Depth sensor, did we mention it rotates. Thanks to this rotation the A80 features a basically bezel-less design and provides the same image quality for front or rear facing images, obviously.

That bezel light front houses a 6.7-inch FHD Super AMOLED infinity display without any notches or cutouts and includes an on-display fingerprint sensor. Rounding out the main specs is a 3,700 mAh battery, an undisclosed octa-core processor (2 x 2.2 GHz + 6 x 1.8 GHz), 8GB of RAM and 128GB of internal storage. That’s a very compelling set of specs and would more than likely give an S series phone from a few years ago a real run for its money. Speaking of money with all of these specs it will be interesting to see how this device is priced. Will this be the new $1000 phone or will Samsung keep with the A lines affordable pricing. The Galaxy A70 while not the ‘flashy’ phone is still a solid performer with some great specs. Up front, there’s a 6.7-inch FHD Super AMOLED display with a teardrop notch, on-display fingerprint sensor and a 32MB f/2.0 camera. The rear cameras have been scaled back a bit compared to the A80 with a 32MP f/1.7 main sensor, 8MP f/2.2 wide-angle sensor and a 5MP f/2.2 depth sensor. The A70 feels more like the phone that ‘people’ would get, as it’s still likely to be a solid performer and will certainly be priced a fair bit lower.

The A80 and A70 will both launch with Android 9 Pie alongside Samsung’s One UI, and will be available from May 29 in selected markets. The A80 will come in three colours Angel Gold, Ghost White, and Phantom Black, and the A70 Black, Blue, Coral, and White, pricing is yet to be announced for either device. We’re still not sure if the A80 or A70 is coming to Australia we will let you know what we find out.

Samsung hasn’t been great with OS updates for non-flagship phones in the past, i wonder if that will change with these phones?

Very much so. the Nokia line of a Android one devices are a very good choice for someone who wants a competitively priced phone that is going to get both iOS and security updates.

I thought $1000 price tags was more like the entry level for high end. Halving the price tags on these devices would bring them down to realistic mid-tier prices.