If you think that the most speed available to any one premises on the NBN is 100 Mbit down 40 Mbit up, you’re mistaken.

Any Australian whose home or business is lucky enough to have been connected to the NBN with full fibre to the premises (FTTP) as the Labor Party originally planned is actually able to signup for between 1 and 4 seperate 100 Mbit down 40 Mbit up plans, even using 4 different ISP’s.

This is perfect for a small share house of up to 4 people/couples or anyone who wants to have a separate internet connection for the home business vs personal family use.

NBN actually offers wholesale speeds higher than 100 Mbit down 40 Mbit up to people with NBN FTTP but few service providers offer these and the wholesale cost is such that there hasn’t been much take-up.

Aussie Broadband (ABB) is one of the few NBN service providers that does offer faster than 100 Mbit down 40 Mbit up to FTTP customers in specific areas where there is enough demand and ABB’s network capacity can cope with these speeds.

I live in one of those areas (NBN Kensington POI) so was able to recently try out the ABB 150/100 plan. A few other areas in Australia also have the option of an even faster ABB 250/100 plan. What’s it like to have faster than 100Mbps internet?

Once you use NBN speeds faster than 100 Mbit down 40 Mbit up you might discover technical limitations in your computer/networking hardware and workflow.

Some people use old 100 Mbit network switches and older routers that aren’t Gigabit speed capable. If you’re getting an NBN connection faster than 100 Mbit then you’ll need to upgrade all parts of your network including the router and switches to Gigabit capable models.

I live in an apartment block near the Sydney CBD so there are lots of other Wi-Fi networks around me used by neighbours and nearby businesses.

I found that using a laptop or desktop connected to my network via Ethernet cable provided much more stable speeds for large download and upload file transfers compared to Wi-Fi.

Similarly I discovered that all the web browsers I tried (Chrome, Opera and Edge) cannot handle uploading many thousands of files to cloud storage without eventually failing or just uploading much slower than the connection was capable of. In comparison uploading to cloud storage via the apps for Onedrive, Dropbox etc was able to use the full upload/download capability of the 150 Mbit down / 100 Mbit up NBN connection. Is it worth it, if you can get it?

It might be, and might not. Reality is there aren’t too many applications these days which will really utilise that faster speed; Netflix doesn’t need it, and it’s only a minor increase over the 100/40Mbps plans available from most NBN suppliers.

The difference is the upload speed;  if you’re running a lot of backups or regularly moving things to the Internet rather than downloading, it makes a bit of sense. Uploading at 100Mbps is significantly faster than doing so at 40Mbps.

This comes at a bit of a cost, though.

These plans are also restricted to certain areas; not all areas with FTTP can get the higher speeds, and not all providers offer them anyway. Thus, comparison sites like WhistleOut and Finder generally don’t list these faster speed options – you’ll need to check with individual providers if they offer them and if they’re available to you.

So even if 100 Mbit+ NBN is an option for you, it doesn’t make financial sense for residential users unless your work is paying for it or you own a business that could be a lot more efficient if you could deliver/retrieve very large files to/from customers much faster.

Hopefully a future federal government demands a lower profit from NBN so they can reduce wholesale prices for high speeds.

Aussie Broadband is fantastic. We’re on 250/100 FTTP. Excellent speeds almost any time of the day (yes even during evenings).
Just did a quick test : 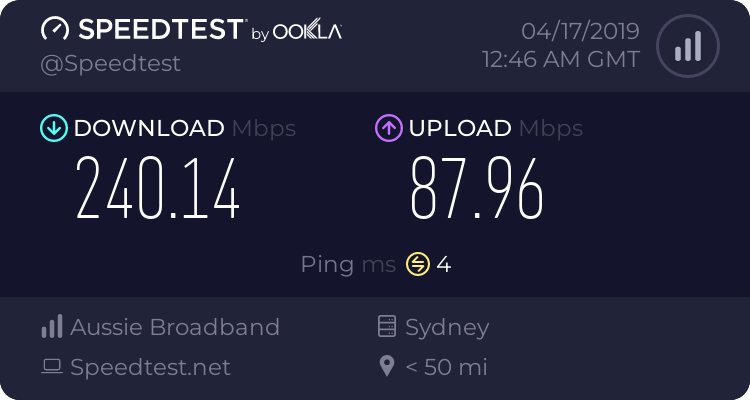 how can anyone vote Liberal? Let coal barons destroy huge amounts of water so they can sell coal and live the good life whilst that coal creates huge amounts of pollution. Sickening amounts of arsenic floating around as a result. Killing thousands. We don’t even need to go to climate change. These other reasons are enough of a justification to end all coal mining. Destructive economic policies. Who do you think uses negative gearing. The wealthy, doctors, execs, landowners, and lawyers who make up the broad part of the Liberal party. They need their massive taxpayer funded subsidy to live… Read more »

i’d hate to get into politics here but +1 for me.

Ha I’m pretty sure he used a digital camera, so that’s a good start.

I’m on Launtel in Canberra on a 250 / 100 Mbps plan and love it! The uploaded speed is really good for cloud backups and I love been able to install / update games at 250mbps.

My Brother who is a University Professor, says his Internet Service with this Mob, is Absolutely abhorrent, and nothing but Trouble??????????????????

I’d go as far as saying I won the NBN lottery, I live in a small rural town in South East Qld that’s serviced by roughly 95% fixed wireless. I’m in a deadzone under the tower on a hill so got fttc. Roughly 60meters of copper under the driveway on a 100/40 plan I’m getting 95 down 35 up.

I didn’t get NBN yet, I’m suppose to get fttc, what realistic speeds should I expect if I go for the 100MB?

FTTC is almost is good as full fibre FTTP

So far as speed and connectivity options go, FTTB and FTTC are probably second-best to FTTP. The copper runs are usually very short, and it’s possible to get very fast speeds over those distances. FTTN is a terrible compromise unless the node is out the front of your place, and HFC is a bit of a variable – in some areas it’s really good, and in others a little less.

You forgot the unfortunate Satellite NBN people. Worse than FTTN

If I had a choice, I wouldn’t even consider NBN satellite.

The technology can support it, but NBN doesn’t wholesale > 100mbps on FTTC as far as I’m aware

I have 150/100 at home – but not through the NBN (which has since rolled out in my area but is shitty FTTN in my area so it’s useless) – Node1 Fixed Wireless ftw. I think this is karma for putting up with ADSL1 for so long.
Node1 have just started offering hyperfast (up to 1GB/s speeds) for those within 100m of an AP as well, though I’m just out of range of that.

That’s awesome speed, i just wish any of these wireless providers operated in Sydney. It seems other states have done so much better in this regard.

Yet NZ is getting 1GB/s full fibnre to the premise all for $63NZ. Look at our rip-off prices and slow speeds and thes of thousands or more on FTTN can’t even get ADSL1 speeds. I’m lucky enough to live at place with FTTP on South Coast of NSW and will probably upgrade to 100/40 from 50/20 given I get full speed all day with AussieBB.

One of many reasons why NZ is a great place.

Currently getting 15mb down and 5mb up so what’s it’s like having speeds faster than that.

For a single user? Quicker downloads is probably the only real benefit of moving from 15mbit to 100mbit. Even a 4k Netflix stream might sneak in at 15mbit (don’t quote me on that! :P) For multiple users, 15mbit might be OK, but as soon as you’ve got a PC or two trying to do Windows updates, someone watching Netflix on a TV and someone else attempting to game the cracks will certainly show even with basic QoS enabled (probably for the poor gamer mostly 🙂 100mbit? You can probably just forget all about who’s doing what on which device and… Read more »

If you are using cloud backup, e.g. iCloud backup, google drive, Onedrive etc… you will notice a huge speed improvement. It often gets overlooked but when your connection’s upload is being consumed by a phone doing backups etc.. your download speeds will suffer because TCP/IP which is main protocol used on the internet requires upload of acknowledgement packets. When these packets leave your premises with a lag, next packet won’t be sent in time, hence slower download speeds. I had a friend on telstra cable, which was 100/2.5mbit or 100/5 something like that, whenever a phone started uploading photos/videos their… Read more »

You should check out Launtel, they offer uptown 1gbps on fibre.

+1 Reasons to move to Launceston

What about HFC areas? DOCSIS 3.1 is supposed to give us Gbps bandwidth…

DOCSIS 3.1 can support ludicrous speeds, but the NBN doesn’t provision it yet because the HFC infrastructure isn’t up to it yet. However, as damaged cables get replaced and congested areas get more infrastructure, there’s no reason why HFC can’t be just as fast as the current FTTP offerings. Of course, fibre is technically capable of significantly faster speeds, but we’re not going to see those speeds offered here for a very long time.

100Mb uploads or faster would be great for streaming.

Royal commission when, right Les? Certainly using this as a political football as the coalition has is obscenely narrow sighted at best.

No sense calling a royal commission, we know what wrecked the NBN and how to fix it, the only question is one of money and willingness. Overbuilding and getting everyone on FTTP is perfect world stuff, but unfortunately the great conservative masses don’t think we need broadband, much less fast fibre.

The destruction of Australia’s fibre optic NBN, destroyed by the Coalition, is one of the greatest acts of vandalism against the Australian economy.

I don’t follow politics very closely, but I know my tech very well.
I followed the whole NBN debate very closely, the amount of misinformation and deception I have seen coming from Coalition made me lose hope for Australia’s future.

I understand NBN, but what about all of the other things I am not well informed about, is this an example of how we handle major decisions?

We deserve better, come on Australia.. be honest!