Home News and Editorial Samsung Galaxy Fold sells out in under a day but reviewers...

“How long will the display last?” This has been the question many in the industry have asked about Samsung’s Galaxy Fold smartphone, and as the phone sells out on the company’s own website, customers and industry reviewers are beginning to report serious issues.

Even with such a new technology, the entire first run of foldable Galaxy phones has sold out. Through pre-sales on Samsung’s online store in the US customers have purchased the Galaxy Fold with such demand that it has “surpassed expectations” and is no longer available for purchase. Droid Life is reporting that those that reserved a device but failed to pre-order fast enough have run out of time “due to overwhelming demand” and they can no longer purchase said device. 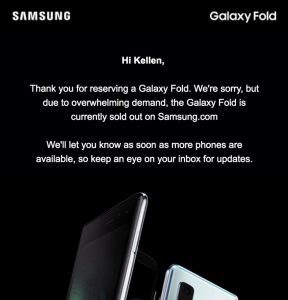 Customers are to be placed once again on a waiting list to be notified when Samsung have stock at which time they will be first in the queue to purchase the device. Whether these people remain willing to purchase a Galaxy Fold is another thing though with many high profile reviewers lucky enough to have one in hand reporting issues with the foldable display.

Reviewers from The Verge, Bloomberg, CNBC and MKBHD have reported issues with their displays.

After just two days The Verge’s Dieter Bohn had a “bulge” appear in the fold of his display which felt like a piece of debris pressing up at the display from the hinge. The pressing of this against the OLED display caused it to break. He has since received a replacement from Samsung with the original on it’s way back to Korea for diagnosis from Samsung.

Steve Kovach at CNBC had issues with his display flickering on and off on the left hand side of the display until it just stopped working. Samsung declined to comment on the issue but you would not expect this to happen to a device that is less than two days old and costs US$2000.

Do not remove the protective layer!

Mark Gurman from Bloomberg also had issues with his display after he peeled off a protective cover on the display that was already coming off, assuming that it was the usual plastic covering that arrives from the factory on most phones.

Apparently the Galaxy Fold has a warning on the outer wrapper of the device telling people not to remove the protective layer from the display – time to start reading those things again – when was the last time you read one of those? There are apparently no instructions on this protective layer on the box, only on the loose plastic that surrounds the device – user error in this case it seems but Samsung will need to do better before they ship it out to thousands of customers.

The screen on my Galaxy Fold review unit is completely broken and unusable just two days in. Hard to know if this is widespread or not. pic.twitter.com/G0OHj3DQHw

The phone comes with this protective layer/film. Samsung says you are not supposed to remove it. I removed it, not knowing you’re not supposed to (consumers won’t know either). It appeared removable in the left corner, so I took it off. I believe this contributed to the problem. pic.twitter.com/fU646D2zpY

Dear future #GalaxyFold owners, I know I always say "No one ever read the instructions"… PLEASE READ THIS ONE!!!

(This is the wrap over the screen of the Galaxy Fold) pic.twitter.com/LuQPRfDZIE

I got this far peeling it off before the display spazzed and blacked out. Started over with a replacement. pic.twitter.com/ZhEG2Bqulr

Some of these issues are user-error but considering the small sample size out in the wild at this stage it is a great look for the fledgling Samsung Galaxy Fold. For users to have issues when there wouldn’t be more than a dozen or so in reviewer’s hands it is worrying. At this stage it appears that all devices which have had issues have come from the same batch. You wold expect newer batches to be more sturdy, better tested and have more warnings regarding that screen protector.

Not only that but for other companies looking to release foldable phones it may, and probably should, make customers wary of dropping so much on such an unproven seemingly immature technology.

As yet Samsung have not publicly commented on the issue but you can be sure they will not be releasing the Galaxy Fold to the public before these concerns are addressed. It will be interesting if this affect sales of the first generation device.

Samsung has issued a response to reports of media review units with broken screens:

A limited number of early Galaxy Fold samples were provided to media for review. We have received a few reports regarding the main display on the samples provided. We will thoroughly inspect these units in person to determine the cause of the matter.

Separately, a few reviewers reported having removed the top layer of the display causing damage to the screen. The main display on the Galaxy Fold features a top protective layer, which is part of the display structure designed to protect the screen from unintended scratches. Removing the protective layer or adding adhesives to the main display may cause damage. We will ensure this information is clearly delivered to our customers.

They treat their customers like guinea pigs, I would wait for the second generation of this phone or the Note 10

I’d imagine those who have preordered are now having second thoughts.

Who would want to be spending $2000 USD to be a beta tester?