Google I/O is where Google officially announce all the latest and greatest that is coming to Android in the coming year. This year there are so many changes in the upcoming Android Q release that they only just managed to fit it in the one hour session – at what seemed at times like 2x playback speed.

Obviously I/O is a developers event and as such most of the sessions are aimed squarely at developers. In amongst all that developer mumbo jumbo we were able to glean some a lot of new things arriving for the average user in Android Q — and the good news is that many of them are security focused.

Bubbles are the will be built into Android

Many apps use old school bubbles as part of their interaction with the user — to remain at the forefront of the users interface and interactions. Due to security issues with allowing these SAWs (system alert windows) they will soon be deprecated — Android Go devices will no longer grant this permission to users. 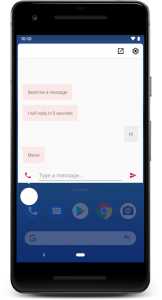 Dark theme ALL the things

To great fanfare Google have introduced dark mode to many of their apps. Now with Android Q they will have this as an end-user feature where the user can switch the dark theme on and off. For an app to have the ability to go into dark mode it will still need to be implemented by the app developer but Google have made that easier.

The developer will be able to implement it themselves using Google’s tools, have an automated tool force it itself (not a great idea as the images will also be inverted when the colours of the app are inverted to dark), manually change all overlays and colours within their app or do nothing at all. Obviously Google want developers to take the first route.

The sharing menu has been a mess for a long time in Android with some OEMs performing their own implementation to varying levels of success. Android Q will bring a new “share sheet” which supports images and text in content preview, does not require an app to start for it to be used and has the copy to clipboard up the top. the end result is a much faster sharing interface. Excuse me for interrupting

Sometimes notifications from background apps can be very annoying. Now Google are changing notifications so that their level of interruption is determined by the priority of the app. The app notifications are separated into priority and gentle with different sections in the notification shade for each. The gentle notifications also have no icons in the Android Q beta 3 but that is just beta and Google are not 100% set on that implementation.

These changes and priorities can be coded into an app but in the end the user gets the choice of the priority of an app.

New gestures that are similar to every OEM

Gestures are designed so that there is less System UI “getting in the way of” content.
One thing OEMs have done better than Google is their gesture navigation. Google have worked with OEMs to implement new gestures into Android Q with what seems to be a swipe up from the bottom and a swipe in from either side.

Developers are able to “reclaim” these edges if their app requires them but they NEED to make it clear to the user if that gesture will not work in their app and they need to make an alternative in the app. Developers will begin to avoid placing clickable and draggable things under these gesture bars.

Other platform improvements include:

All in all Android Q looks to bring a lot of new changes to the way we see and use our Android devices. Personally I am looking forward to seeing what Google do with their gestures after OEMs showed them how to do it properly with full screen devices. What about you?