It did not come as much of a surprise this morning when Google’s head of hardware Rick Osterloh announced their new home hub, the Google Nest Hub Max. We saw rumours of it earlier this year along with a name change followed by someone inadvertently listed the Nest Hub Max and Pixel 3a online for sale.

As part of the new device’s introduction Google are bringing their Home products under the Nest band. While the new device’s existence was not a surprise, the functionality of it was, and it was extremely impressive.

The Google Nest Hub Max follows the same design language as the Home Hub and does not look out of place in the same room. It has the cloth base and the similar tablet perched on top and looks very similar to the Home Hub; the Hub Max is just bigger. The Hub Max features a 10.1-inch display and dual front-firing 10W speakers and a 30W back-firing subwoofer. There are two far-field microphones and a private mode switch which physically disables the camera and the microphones. The Hub Max has smart control of its display brightness through the RGB sensor for ambient EQ.

A new introduction to this hub is the front camera, which can be used not just for making video calls but for many other things that bring a unique experience.

The Nest Hub Max has touch controls which appear when someone approaches the device. Using ultrasound-sensing AI/ML the device emits ultrasound frequencies to detect motion and the proximity of the motion. This is all performed on-device with nothing being processed in the cloud.

Face detection and Gestures are new

Once the hub detects motion it activates its new facial recognition and if the face is matched to one already stored on the device the touch interface is activated. If your hands are dirty, or if you just can’t be bothered walking over to the hub there are some features that can be controlled using new gestures.

The new quick gestures allows you to raise your hand to pause or play media, alarms and timers. This is quite handy if you are busy cooking or the other side of the room and need to pause it without yelling to Google over the top of the music/media that is playing.

Face matching not only puts the controls onto the display but also customises the display for that person showing their calendar events, reminders and messages. The Hub will also show your personal preferences for the morning or afternoon such as news services, podcasts etc — notifications for these are proactive.

For example, if someone leaves you a voice message via Duo on any phone, tablet, or Hub (yes someone can leave you a message to read from the very same hub you are reading it from. Other functions include setting reminders for others or for yourself that can pop up when the hub sees that person, viewing Google Maps and all the usual Google Assistant functionality such as flights, restaurants and other reservations, deliveries etc.

The face match and its icon disappear “within seconds” once that person walks away from the device, keeping it safe from prying eyes. 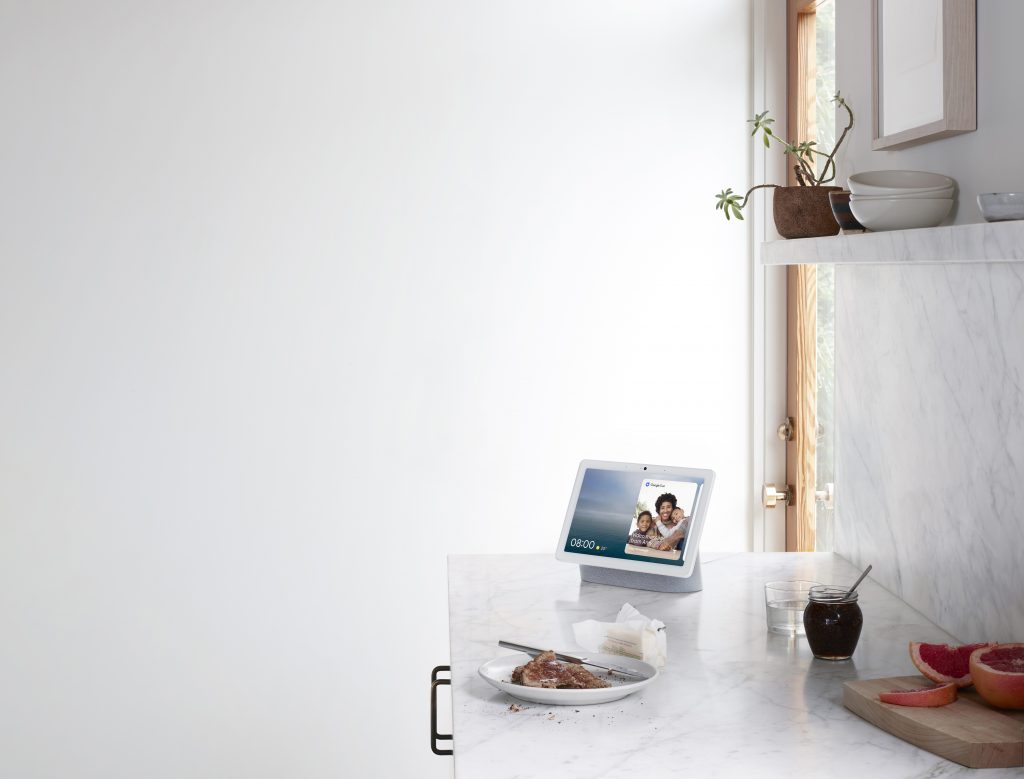 Google went to great lengths to stress that at all times when the Hub is interacting with its surrounds the surroundings know through various means. When the device is face-matching a small outline of a face appears on the display and when the camera is active/streaming a green LED light is lit next to the camera.

Along with the above notifications if there are times you do not want to be disturbed there is that physical privacy switch which disables both the camera and the far-field microphones.

As for the face models — they are stored on the device and not in the cloud with Google ensuring that the machine learning models are stored and encrypted locally. Once you remove yourself from the front of the Hub Max the facial recognition pixels are then deleted.

The Nest Hub Max can also be used to keep in touch with family members with the 127 degree front-facing camera. Duo on the Hub Max has a new feature called auto-frame which uses the wide-angle lens to follow the person speaking as far as it can. This way the person on the other end can always see the person talking on the Hub Max end.

Not surprisingly, a device called the Google Nest Hub Max has Nest camera functionality built in. Not only is the hub a media player, messaging centre and life organiser, it is also another Nest security cam. It has all the usual Nest cam features built in such as:

The Google Nest Hub Max can also be used to play the feed of other Nest cameras including the Nest Hello Doorbell (which Google are “working hard to bring to Australia”). Don’t forget about the smart home
The Google Home Hub is able to control all compatible smart home devices and the new Hub Max is no different. Adding yet another reason to purchase it is its fully functional smart home control using voice or on-display.

Sounds too good to be true. Must be expensive right?

The Google Nest Hub Max is not cheap but at the same time not exorbitant — we are in the times of two thousand dollar phones remember. At AU$349 it is not an impulse buy but if you have a connected home and live in the cloud with your everyday life then it could be just the thing you need.

It will be launching in Australia this coming Winter (and the US and the UK) and availability will be announced closer to the release date but we expect it to be sold everywhere the Google Home Hub is sold.

I understand the security lengths they’ve gone to for the camera, but just give us a physical shutter!