One of China’s biggest smartphone brands is set to enter the Australian market with UMIDIGI announcing that they are bringing their products to Aussies through online channels.

UMIDIGI began in 2012 in China and since then has grown to over 120 countries and with the Australian entry-level and mid-range markets continuing to thrive see an opportunity to continue to grow their brand in Australia. Their entry will, at first, be via online stores eBay and Amazon and will offer their new entry-level phone, the A5 Pro, set to be released on May 21. 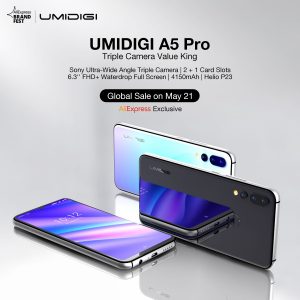 The UMIDIGI A5 Pro will be a true entry-level competitor but at the same time pack some impressive specs and features. The A5 Pro will feature a triple Sony rear camera system, a rear-mounted fingerprint sensor and a big 4150mAh battery. The display will be a 6.3-inch 2280 x 1080 resolution display punctured with a ‘waterdrop’ notch housing a 16MP selfie camera – UMIDIGI state that the screen-to-body ratio is a massive 92.7% and if correct is extremely impressive.
The phone is encased in glass on both sides giving it a premium feel. 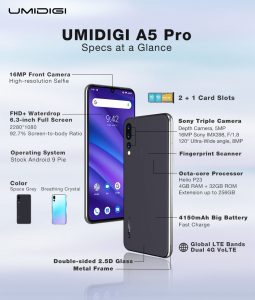 As for connectivity the phone will support dual 4G sims as well as a microSD expansion slot. Android 9 Pie will be running everything under the hood but there is no mention of update frequency or length of support at this stage.

Available in Breathing Crystal and Space Grey colours it will retail in Australia through their eBay and Amazon channels for under $200! For a phone under $200 not much is expected but on paper and in pictures this phone looks set to impress — time will tell if their overseas success translates to success in Australia.

We hope to have an A5 Pro on hand to run it through its paces in the coming weeks. Be sure to head on over to their eBay and Amazon sites to check out their other offerings.

I bought a Umidigi One pro last year in August for $230 and it has had constant updates. Spec vise it has everything I needed. Been very happy with it and would recommend it.

Entry level Umidigi phones have been able to be bought easily for use in Australia for months already.

Source: I am using an Umidigi One Max right now, bought through Gearbest for $260 AUD after postage, had it since January. Three minor software updates have been installed since I have had it.

Not really I’ve had the umidigi F1. Updates are constant. They will need support in Australia. Battery last all day with considerable use.