Telstra is pretty excited today, as the carrier hosted journalists at its Sydney headquarters and flagship store to demonstrate the 5G network’s capabilities ahead of tomorrow’s launch.

For Telstra, the moment is huge – they’re a global leader in telecommunications and they’ve been contributing to and shaping standards such as 5G for many years.

The current 5G network is deployed based on 4G base station locations, deploying additional hardware at those sites to handle 5G connections. Importantly, it’ll also use the backhaul from those towers.

Telstra has been lighting up its 5G over the last few months, with 10 cities currently running 5G in some form. It’s finally ready to throw the switch on its 5G network for customers, and says it’ll light up another 25 cities (including major regional centres) coming online in the next 12 months. The carrier says this will cover around 4 million Australians.

The company also wants to emphasise that 5G is a very young technology, and we’re only at the beginning of its deployment. It’s a 5G NR network – we can expect spectrum auctions and new devices with new radios in them to handle millimeter-wave technology.

All Telstra is willing to say on speed at the moment is that you can expect “about double 4G” but you could be lucky and get much more – we saw a device hit 1.2Gbps today, but we were sitting in Telstra’s test lab in the same building as its base station. Your mileage may vary.

There are two devices ready to go on sale tomorrow aimed at different consumer segments. One is the first 5G handset for the Australian market – Samsung’s Galaxy S10 5G, which builds on the excellent pedigree of the Galaxy S10 series of phones; the other is a battery-backed hotspot from HTC (the HTC 5G Hub) that can go mobile with you into 5G coverage zones to improve your connectivity on the go. We grimaced a little at the 5G version of Samsung’s phone getting a distinct SKU with its own specs, but personally I’ve mellowed on this stance. It’s neat to see Samsung pour a little extra into the new phone, and the company is clearly very proud of the result.

The Galaxy S10 5G features a mammoth 6.7-inch display every bit as good as the screens you’ve seen on the company’s already-launched S10 models including the punch-hole for the front-facing camera. On the back there’s an extra Time of Flight sensor that grants the S10 5G some additional tricks like the ability to measure distance and depth, and inside there’s a huge 4,500 mAh battery.

The Galaxy S10 5G is packing Samsung’s very best camera, with a score of 117 on DxOMark for still photography and a score of 100 (the first smartphone to break 100 points) for video.

Samsung is excited to put 5G devices in Australians’ hands and we’re the only market in the world with a free upgrade to the Galaxy S10 5G if you purchased a Galaxy S10+ (on a Telstra plan, and of course some conditions apply). Telstra’s store staff are ready to process your upgrades for the next three weeks in Telstra stores.

Telstra is offering the Galaxy S10 5G on two-year lease plans on the Small, Medium, Large, X-Large and Ultimate plans. These plans are available now, and are valid until Telstra announces new plans in June. If you jump in now you’ll get access to Telstra’s 5G network for the life of your contract.

When Telstra’s new plans come up in June however, you’ll see some changes. Access to the 5G network will be free for 12 months, then it’ll cost $15/month. If you’re not in a 5G coverage area but want the latest handset, that’ll work out alright for you.

Exactly what we’ll see in June is a bit up in the air, but we’ll report on the new plans when they become available. We’ve seen much of HTC’s 5G Hub already, after it was revealed to the world earlier this year and shown off at Mobile World Congress. If you’re not looking to upgrade your phone to a 5G model, grabbing the 5G Hub is an attractive option for getting some fast data if you’re in Telstra’s 5G network footprint. If you’re not, it’s still a super-fast 4GX hotspot, too.

You can connect up to 20 devices to the hotspot run by the 5G Hub, and it also supports Gigabit ethernet. It’s also an Android device in its own right, so you can run apps or games on it and you can get its output to a big screen.

Importantly, because its got a battery in it, you can pick it up and take it with you. If you’re passing through some 5G areas on the move it might make sense to use it to handle your data requirements.

The 5G Hub is available to order now from Telstra, and you should be able to walk into a Telstra store tomorrow and pick one up for yourself. It’s available on S/M/L two-year plans at $70, $94 or $104 of your hard-earned monthly. You’ll get 25, 60 or 100GB of data each month. 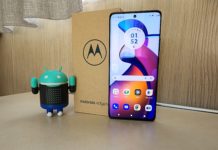 I wonder if 5G will negatively affect the BOM’s ability to forecast dangerous weather like it will in America. The Verge reported that NASA and the National Oceanic and Atmospheric Administration (NOAA) have warned of reduced ability to predict the path of deadly hurricanes and the amount of time available to evacuate people. This is due to frequency interference issues between weather satellite’s and the new 5G spectrum.

5G Gigabit Speeds are here but still have crappy mobile reception. How can we be so advanced in one thing and not the other?