Home Mobiles OnePlus 7 Pro update rolling out with fix for ghost touches and... The OnePlus 7 Pro looked great on stage when it was announced. IRL though it was plagued with a few issues including a camera that wasn’t up to the standard we were promised and random ghost touches on their expensive display.

OnePlus promised that their next update would bring fixes for the camera as well as the ghost touches that many, including me, were experiencing. They seem to be true to their word with an update rolling out that apparently has a host of bug fixes in it including:

The new update is apparently rolling out slowly over the next few days with a wider exposure waiting to see if there are any undiscovered critical bugs present. If you are impatient like me you can use the Oxygen Updater app from the Play Store (not made by OnePlus) to download it and then use the OnePlus manual install option to update your phone. 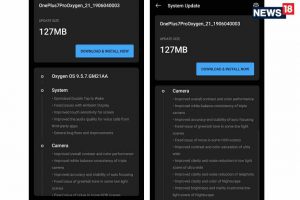 As someone who had some serious ghost touch issues (so much so that I have had the NFC turned off for a few days to avoid them) with some very short testing they appear to be gone. Of course it is early days having only installed it an hour or so ago.

As for the camera fixes I will have to test them out over the weekend but with my final review just about ready you can be sure I am hoping I will have to rewrite the camera section in a much more positive light.

The update does not bring any new security patches and the phone still sits on the April patch — I suspect this is a hurriedly patched together bug fix update only and OnePlus wanted to get it out there before too many people were affected by said bugs.

We will wait and see how this update fares but it is good to see bugs like this being squashed so quickly. Hopefully many other manufacturers learn from this and look to fix their bugs just as quickly.