Smart LED strip lights have been around for a while now, but up until recently there weren’t many of the big brands making them. Now they are and LIFX is one of them.

LIFX Z LED Strip lights are a flexible strip or tape of individual LEDs that can be remotely controlled using an app or Google Assistant (along with Alexa and Siri). The lights can be cut to any length you want, extended to up to 10 metres, or bent to go around corners.

The LED strips can be set to show any colour you want and in any combination — there’s even some funky presets to help you get your creative juices flowing.

All of the above is based on getting them setup in the first place.

Setting up is a piece of cake right?

I wish it was.

I had no issues with the Google Home app seeing the LIFX strip in the first place but then once I’d added the account it could no longer see any LIFX lights. I deleted the LIFX account out of the app and tried again — same result. Not wanting to prove the definition of insanity I asked around and it seems that some phones tend to have some problems setting up LIFX devices.

The Pixel 3a didn’t work. The OnePlus 7 Pro didn’t work. I then tried a phone that was a fair way from stock Android, the OPPO Find X and it found it straight away and installed the LIFX Z Strip lights which could then be accessed from the Google Home app on any phone.

LIFX is aware of this issue and are working on a fix — it is not the first time I have come across it from an IoT company. I have heard of people calling their help line and getting help from there to set it up. I’m yet to hear of anyone who failed entirely to set it up even after speaking to their help line.

Using it is a piece of cake right?

The first port of call for most people is the LIFX app and it’s not half bad. The app allows you to make certain lights favourites with easy shortcuts to them on the front page/dashboard of the app. From there you can turn the light on and off easily. Tap into each light gives you the granular control to change the colour or if you just want a white allows you to change to warmth of the white. The brightness is also an easy slide in this section of the app.

The app will also allow you to use one of the scenes created by LIFX to use or to create your own. You can use whatever colour you want and then animate it using one of the various options there including music equaliser, colour cycle, flicker and more.

The app also allows you to turn the lights on and off automatically at various times throughout the day. Did I mention you can change the colour of the lights to any colour along with it’s brightness:

In the end though, many of us here at Ausdroid will prefer to control the LED Strip using their Google Home account. The Google Home app can only turn the light on and off, and cannot control the colour of the LED strip — some other globes do allow that so it is possible and hopefully LIFX can include that in future software updates.

Things you can say to control your lights:

If Google Assistant is not your thing, there are all the other usual smart control options that you would expect from smart devices these days. Along with Google Assistant, the strip lights are compatible with Apple Homekit, Microsoft Cortana, IFTTT, Amazon Alexa, Samsung SmartThings and Logitech Harmony.

But I have corner cabinets to put them under

The LIFX Z LED Strips are flexible so can be bent around corners — not easily but it can be done. LIFX has instructions on the recommended way of doing it — of course it looks a lot easier for them than it is in real life. I had a few issues getting it to stick down properly after bending and I suspect to get it to be permanent you may need to bring some stronger glue to the party.

The LED strips can also be cut to any length you want without affecting their ability to light up. If you are going to cut it you do need to be careful and cut it at the correct location — the empty white space after each zone of 6 LEDs.

I need more than the 2 metres in the starter kit

Luckily it is exceptionally easy to extend them. Using the 1, 4 or 6 metre extension pack you just turn the lights off at the switch, plug the extension into the end of the Z LED Strip, turn the switch back on. From here you need to tell the strip that it is now longer — pressing and holding the small button on the power controller is all it takes. The lights will then flash all the way to the end of the extension strip and you are good to go.

The lights can be extended up to 10m per controller which is extremely handy.

There is a bit of a learning curve when using the LIFX app to create scenes/themes but for those who don’t have the time or who just can’t be bothered using the LIFX community help pages, there are 17 included themes to make your life a bit easier. Let’s face it though most of the time you will either a solid colour or plain old white or varying warmths — all easily set using Google Assistant or the LIFX app.

Bending the lights looked easy on the instructions but were decidedly not so much. Getting the bend right was just okay, the sticking the lights down in the bend was a bit more difficult.

Setting the lights up within the Google Home app was painful but I got it sorted in the end.

The best way to see what a reviewer thinks of a product is whether they would fork out their own hard-earned to buy the product itself.

I will be purchasing a few sets of these with extensions for mine and my fiancée’s walk in robes and under the overhead cabinets of my study and the kitchen. I dare say my 10 year old son would love some coloured ones around his bed too! 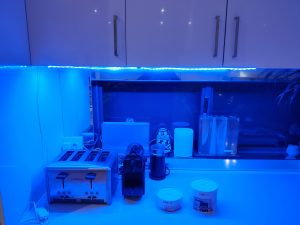 The only main issue was with the setting up of the lights within the Google Home app. Once setup they were extremely easy to use and operate. They stuck well under cupboards (make sure you clean the area first with the included alcohol wipe). The options for dimming and changing colours was fairly extensive and easy to accomplish by either method I tried.

The LIFX strip lights are not cheap but are of great quality from a reputable company and thus you can be sure that they will not only last a long time but are backed strongly by their help support lines and community pages but also by a warranty that can be trusted. I recommend you check them out if strip lights are in your future.

You don’t setup these lights in the google home app. You use the Lifx app to discover and add the bulbs. Once added there you then go to Google assistant and add the Lifx account there. This will then sync the lights to assistant and you can control them. I can change the colour of the strip on home hub but only the whole strip not zones. The tiles are awesome. setup a bit of a pain but they work well. They are also now touch sensitive so you can double tap to turn on and off, tap once to… Read more »

I’ve dipped my toes in the water with a Yeelight bulb and have set it the sunrise wake in IFTT.

Looking at getting some strip lighting for the kitchen so this review comes in handy. Are you going to compare with any other brands?