Home News and Editorial BREAKING NEWS: Huawei set to be back in business as Trump looks... Back in late May, US President Donald Trump and his administration added Huawei to the US DOC Entity List, meaning that US companies were forbidden from doing meaningful business with Huawei. At the G20 summit in Osaka, Trump has signalled that he is set to reverse his decision for reasons other than national security.

At a press conference in Osaka, Donald Trump signalled that he is open to removing Huawei from the Entity List as part of a trade deal. Trump and his minions have all along said that the addition of Huawei was due to national security concerns but we suspected otherwise.

This new about-face suggests that we were right and, as per normal, Trump and his administration were using ‘alternative facts’ to sell the new Entity List addition. Surely if it was due to national security issues that would not change due to a trade deal.

Trump said to the world’s media in Osaka that:

One of the things I will allow, however, is, a lot of people are surprised we send and we sell to Huawei a tremendous amount of product that goes into the various things that they make.

And I said that that’s okay, that we will keep selling that product. These are American companies… that make product and that’s very complex, by the way, and highly scientific.

So American companies will continue and they were having a problem, the companies were not exactly happy that they couldn’t sell because they had nothing to do with whatever it was potentially happening with respect to Huawei, so I did do that. 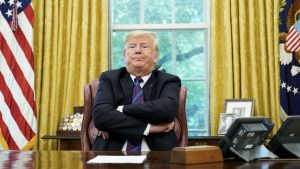 It is possible that the lobbying of Google, Intel and other tech companies that rely on Huawei to make money finally got through to the US President that this ban was hurting US companies just as it was hurting Huawei — funny that some are only just realising we live in a global economy these days.

At this stage, the discussions are only just now happening, so nothing is final nor formal with talks between the US, China and Huawei still ongoing. The talks though seem to be very promising with tariffs that were set to go into effect in the next few days now being suspended.

Trump though maintains that Huawei is a security risk:

Huawei is very much in play in terms of our country and in terms of intelligence and the intelligence community — we know a lot about Huawei — but I don’t want to mention that right now. I just think it’s inappropriate. We’re not making it other than what I told you… We’re going to save that for later.

With the G20 summit finishing later tonight (Japanese time) they had better get heir butts into gear if they want this done before the end of the summit. Even if they don’t finalise the deal by the end, you would expect the talks to continue as the loss of Huawei to the worldwide market affects many businesses all around the world negatively.

You can be sure that Huawei are watching these developments very closely and we hope that this madness to use a company’s livelihood as leverage is stopped and reversed.

Huawei can then get itself back on track to its goal of dominating the 5G and smartphone markets.

Not sure why this news is still on the home page top section? Not breaking news anymore (very outdated) and even invalid as of now (event has turned once again). Aren’t there other bigger news that should be showing instead?

I stopped reading at ‘minions’.

Waiting for all the nutters who are so blatantly racist with their anti-Huawei and anti-China comments to make an appearance, grabs popcorn. The patience of the Ausdroid staff in dealing with their ridiculous posts throughout this saga is to be commended.

Classic trump , say one thing, then completley change his mind when money and votes are forthcoming.

Donald Trump has just declared himself ‘King of the World’ by his high handed proclamations on trade with China. He had placed a ban on technology transfer and trade with the Chinese tech giant Huawei, on the basis of ‘state security’ and was forcing allies, such as the UK, to follow suit under threat of isolation from US trade if it did not. One might have hoped that this policy was based on some rational assessment of risks and benefits from objective information provided by state security services and not just a ‘gut feeling’ after watching some half-baked infomercial on… Read more »

Just as I said would happen in earlier articles about the ban. Trump imposes a ban to create a big storm and make himself seem powerful and then takes it away to look like a hero! Typical of him!
It’s great news though as Huawei didn’t deserve this BS!