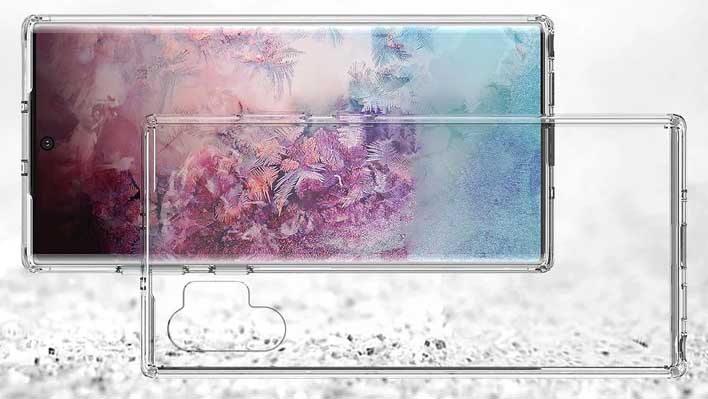 As we’re now almost exactly a month until Samsung’s next big reveal in New York, the leaks around the next Galaxy Note handset continue to intensify. This weekend, we’ve got a set of three renders showing off the new Galaxy Note 10 in a clear TPU case.

What we can see in these renders is a true edge-to-edge display, no 3.5mm headphone jack, and the possibility (at least) that the MicroSD slot could be gone.

The other notable design choices are a single hole-punch front-facing camera, this time aligned in the center of the display (as opposed to the right-hand side as in the S10 range), and a quad-camera setup on the Note 10+ (which comprises three traditional camera sensors and a time-of-flight sensor), whereas the standard Note 10 will feature a triple-camera setup and no TOF sensor.

It’s hard to take too much away from the renders beyond this, but it looks as if Samsung will retain the popular IR blaster on the Note 10 line, which we can see in the top case render.

We’ll keep an eye out for whatever new information comes to light between now and the August 7 launch date.