Home News and Editorial Razer Blade RTX — A beast of a laptop, but can it... Razer is well known for their gaming equipment, high quality that takes a beating (I know, my keyboards have taken a few beatings over the years!), continues to perform at a high level and goes the distance. So knowing this, when Razer offered its Blade RTX laptop for review I grinned and happily accepted.

The laptop market is a minefield of options, gotchas, hidden costs and frankly some really dodgy options. Sometimes you’ll get an absolute bargain and others you’ll find out it wasn’t worth the money. Brand names seem safe, sometimes they aren’t and often the lesser known names will give an experience you didn’t expect but are hugely happy with. With all this in mind Razer have a lot to contend with, needing to find themselves a point of difference to market and nail it – the Blade RTX does some of that really well.

Because of my use case, I’m personally not going to buy a laptop of this size as I need the mobility. That’s why I have a 13-inch Macbook Pro for the lightweight build, reliable performance, excellent keyboard (at least for my taste) and great battery life to name a few benefits. What what immediately evident to me was the heft that the Blade RTX packs – it weighs in at just over 2kg (without the power brick in tow) which is just too much if you’re wanting to be mobile a lot. The Razer Blade RTX 2080 is a mobile gaming machine that you could potentially also use as a desktop replacement, but there’s a couple of caveats on that which I’ll go into through this review along with the other points that make this either a good or bad choice depending on your needs from a laptop. Much of what users want from a laptop revolves around the specs of the device:

The RTX 2080 is sporting some really sharp end hardware starting with the i7-9750H cpu and 512GB SSD which aids the performance on startup and during gaming. More factors in the gaming performance of this laptop are the 16GB of DDR4 (which you can expand to 64GB) and the GeForce RTX 2080 which has 8GB of dedicated VRAM.

The screen is a 15.6” Full HD (1920 x 1080 resolution) 240Hz display which isn’t the highest resolution screen you’ll find on a laptop, but boy does that refresh rate make it easy on your eyes when gaming or watching video. From an aesthetic point of view, this all comes together on a screen that has a lovely matte finish and 4.9mm bezel. 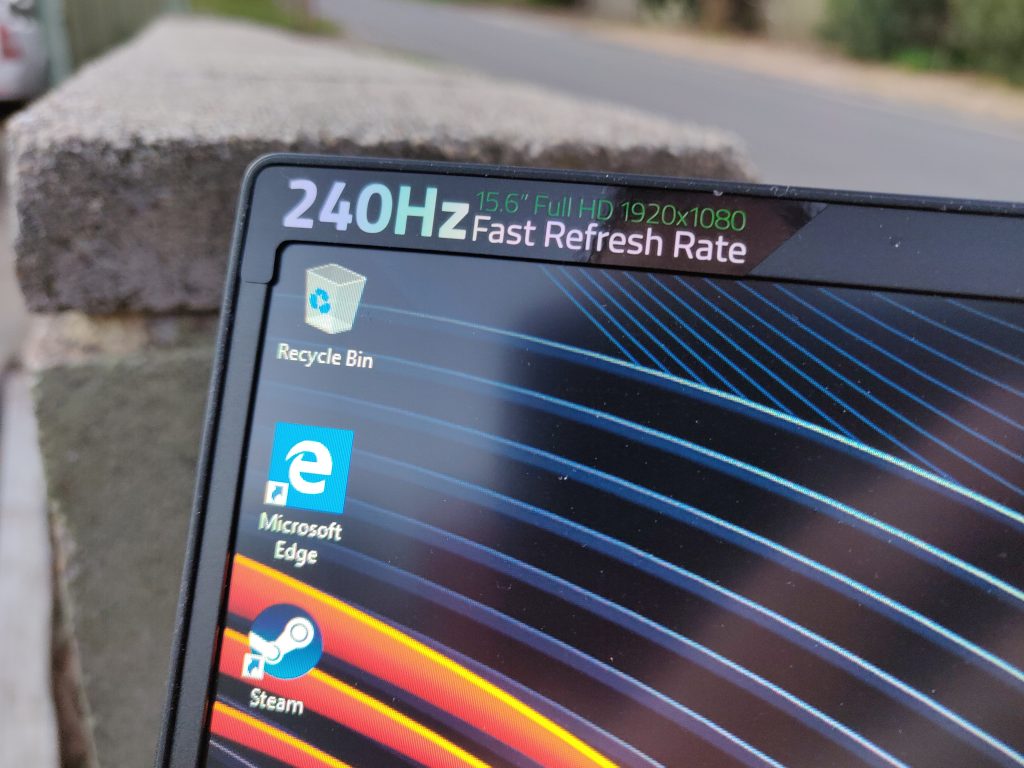 Razer has packed in a host of connectivity options to the Blade RTX as well. Bluetooth 5.0, 2 x USB 3.1 ports, a USB C port, HDMI and Mini Display Port, 802.11 a/b/g/n/ac Wi-Fi and yes, even a headphone jack are available on this thing. I like the fact that they’ve covered all the bases, new and “old school” connectivity and at no stage did I find myself “wanting” for something more in terms of connectivity.

It shouldn’t surprise anyone that with the specs we’re talking about, the Razer Blade RTX performs really well. I can’t emphasise this enough, it flies – load times aren’t just snappy – they’re blisteringly quick for a laptop, playing games is a breeze for this thing and watching high resolution movies isn’t a drama either. I quite like the look of it too, it’s somewhat understated in design until you add in the RGB keyboard illumination (which you don’t have to use) so if you really wanted to you could pass this over as a workhorse laptop in a corporate environment.

Set-up was pretty easy as there was much of the work done before the laptop was delivered to me for review. As a curiosity, I went digging online and found that the reports of setup was pretty much all automated when attached to a Microsoft account. I got everything I needed loaded up and got into my day to day my workload is pretty consistent. Internet use, MS Office, Email, a bit of sound work and occasionally a bit of playing around with video editing. The Razer Blade honestly never missed a beat, performed at a high and consistent level and met most of the expectations I had of it. I liked the design of the chassis a lot. They’ve done well to get something that is – in brutal honesty – quite cumbersome to look, and feel really sleek. The hinge mechanism that holds the screen is really well delivered, offering a solid hold when the screen is closed and no movement while the screen is open. Exactly what you want when you’re using a laptop on your lap vs a desk.

But then the problems start…

With the high end specs, you need some high end cooling and physically small cooling usually means high revolution fans. That’s exactly what we’re dealing with here, even when the system isn’t under much, if any stress – the fans are going and they’re quite noisy. The noise that comes from this thing isn’t as biblical as some other fans I’ve heard on laptops in the past but in a quiet room it is intrusive and gets annoying pretty quickly.

The battery is far from brilliant, it offers unacceptably poor life even for a gaming laptop. I saw as little as 2 hours 40 minutes from a supposedly full battery when the only item open was a browser. It took a bit of investigation and tweaking the power settings to get a touch over 6 hours from it which means you’re still not going to get away with carrying just your laptop. You definitely need to choose if you want blistering performance OR “acceptable” battery life if you’re not running on mains power.

What do I say about the keyboard? It takes a lot of adjusting to as a laptop to work from. The layout isn’t quite conventional and I found myself making a lot of typing mistakes (even more than the Ausdroid Editors have to deal with normally from me) that I normally wouldn’t, hitting the function key or direction arrow instead of shift and it’s all down to an unusual layout of keyboard. The other factor that caused me a bit of frustration and is related is the touchpad. With the keyboard layout being as it is you’ll regularly skim the palm of your hand on the touchpad. I do this a lot on my Macbook and have done on other laptops for years, but I have noticed that the rejection of these inadvertent touches on the pad for the Razer Blade leaves a bit to be desired. I relocated the pointer a number of times while I was working on a document and began typing in an entirely new area (sometimes over what I’d already done) which is quite frustrating. A point of note though, the location of the touchpad is such that when you’re using WASD keys for gaming – you’re well away from it and it’s a non issue.

Who is it targeted at?

This isn’t a cheap option, honestly it’s not a mid-range option either. If you’re seriously looking at a Razer Blade RTX of any iteration, you’re looking at an investment for

So with that in context, the costs aren’t quite as shocking as they might otherwise be when compared to some of the sub $1000 options you’ll find at the major electronics retailers. In fact, the lowest option which has a significant downgrade of screen from the unit we tested is $2,499.00 full RRP and the top end model will set you back (sit down…) a whopping $5,099.00 Aussie dollars. The reality is that if you’re seriously looking at this it’s a big investment that you’ll want to be using heavily, daily and for a couple of years. Which leaves me at a bit of a loss to really pick the intended market. If you’re working in a situation where you need mobile power, then this is a viable option but there is absolutely cheaper options. If you’re a gamer who wants a mobile option for LANs then there is so much yes here while it could be used in other situations there’s a clear target market of gamers which I can’t help feel limits potential sales.

I mentioned earlier, this thing flies. It loads quickly, the video performance is quite amazing for a laptop (nb. we had the 240Hz screen and system with all the trimmings) and made game play for extended periods really easy on your eyes.

The only issue I had with gaming was the noise from the laptop. It’s easily explained: You’ve got a high end CPU and Video Card running flat out and they need cooling. The fans were going flat out, creating that needed cooling but also a somewhat biblical noise!

This is easily dealt with though, you’re on a laptop so if you’re using the built in speakers for gaming you’re doing it wrong. I plugged in my headset and off we went, the noise was suppressed and the experience became far more immersive. My test bed for gaming was a couple of sports games, a couple of FPS and a bit of “old school” RPG with Diablo III. It didn’t seem to matter what I threw at the Razer Blade RTX it handled the pace well. In fact at one point I was running Call of Duty WWII in Steam and Diablo III which hammered the CPU, RAM and Video capabilities – but only created a few momentary signs of lag which was hugely impressive when it was essentially running 2 games simultaneously.

Who should buy one?

For most users, this is a really difficult sell. In fact – unless you’re regularly looking for a laptop that’s hyper powerful or gaming on the move regularly, the honest answer is no. There are laptops far more appropriate and affordable to everyday use.

It’s not light and doesn’t have great battery life, it’s acceptable once you tweak it a bit but you compromise a lot of performance to aid in getting the battery life. So this is very much a desktop replacement option, particularly when you add in the heft of the power cube.

Despite my issues with the noise and in particular the keyboard, the Razer Blade RTX is a very good machine for a very specific market: Gamers!

This is a powerhouse and simply isn’t going to suit many users, but for their target market its going to get some blood pumping but the price may set some blood boiling. Honestly – It’s an investment that many users simply aren’t going to make, but those that do and understand what they’re buying are going to be pretty darn happy with their purchase.

Phil, did you try to get Linux running on this laptop?

No. But the hardware is (on paper at least) compatible

I have the mercury edition (2018), everything works on my ArchLinux: