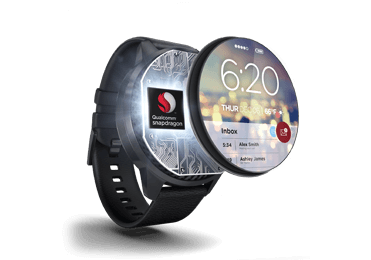 Qualcomm may finally be developing a processor for the wearables market. Oh, yes you’re right – they’ve done this before, but the results weren’t so great.

Since the dawn of Android Wear we have seen very few processors dedicated to smartwatches, with the original Wear 2100 and year’s Wear 3100 – both were reconfigurations of already mediocre chips, and despite promises to the contrary, failed to deliver the performance we want in a smartwatch.

Today’s rumour, from Winfuture, suggests that Qualcomm is testing new wearable platforms ‘WTP2700’ and ‘WTP429W’, thought to be two variants of the same chip.

The new chips are based on the existing Snapdragon 429, bringing a slew of improvements including 64-bit architecture, 12nm fabrication (down from 28nm), support for higher clock rates and Bluetooth 5.0. We should be looking at a more powerful, but more power efficient chip, both good things for the Wear OS market which is sorely in need of a shot in the arm.

In testing, the chip is said to have been paired with 1GB of RAM and 8GB storage, double what you see in the vast majority of Wear OS devices. It sounds more like a low-end phone, which is more in line with the Snapdragon 4xx origins of the processor.

Let’s dump a little rain on the parade here. While we are excited that Qualcomm may actually be making a processor that will serve the wearables market well, we’ve heard the song before.

This processor is in early testing. It’s not arriving in devices that will be announced tomorrow, next week or even next month. The actual time scale for Qualcomm to get to production and then get the processor into devices is unknown.

Still chugging along happily on my Intel based New Balance RunIQ.

Much too little … much too late. Even if the perfect Pixel Watch appeared with this chip in it soon, I wouldn’t touch it … Wear OS has burnt through too much customer trust over too long a period for the public to turn around on this. It will need YEARS of good Wear OS product before much if any market share can be clawed back … if ever.