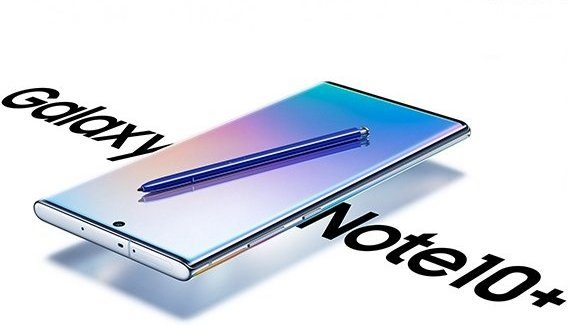 We’re less than a month from the launch of Samsung’s next big phone, and as you’d expect, more and more details are coming to light. The latest leaks give us a look at official renders of both the Samsung Galaxy Note 10+, and a new smartwatch called the Watch Active 2. Both are expected to be announced at an event in New York next month.

The two images were shared by Evan Blass overnight, showing the Galaxy Note 10+ in a nice angled view that shows the flat top and bottom of the phone. The colourful wallpaper – reminiscent, some might say, of Huawei’s recent styling – shows off the centered hole-punch camera, but the top and bottom bezels are harder to discern from this angle.

Resting on the Note 10+ is a striking purple S-Pen that very definitely fits the colour scheme of the phone its resting upon. The styling of the text and positioning of the various elements leads us to believe that this is an official render from Samsung.

Alongside is something that has only recently been rumoured, an update to the Samsung Galaxy Watch Active line. Dubbed Watch Active 2, we can see a beautiful rose gold case matched with a elastic/rubber pink wristband.

Probably the major thing we notice here is the top button is longer and flatter than the more circular, obvious bottom button. This must be to distinguish between the two and to make operation clearer. Again, the graphic elements lead us to conclude that these are likely official images.

It’s about three weeks until August 7, so it won’t be long before we find out exactly what’s coming from Samsung in the second half of 2019.