Home Mobiles 5G If this is the Google Pixel 4, I’m in

We have seen quite a few Pixel 4 leaks already but comparatively speaking it has been kept under wraps better than any other recent Google Pixel phone. While they may be doing their best to keep it under wraps it hasn’t stopped someone from being spotted using one in the wild.

Isaac Connor from The Teen Tech spotted one being used by a Google employee on an airplane two seats away from himself. While he wasn’t able to get much closer than that to it he was certainly paying attention, managing to check out some details of it and snap a couple of pictures.

First up the device he saw matched the leaked images of the device showing a white rear of the device, a metal frame and a black square camera setup on the rear.

The pictures he managed to snap of the supposed Google Pixel 4 (XL?) showed that the side and bottom bezel on it are a great deal smaller on it than last year’s Pixel 3. The bottom bezel in fact looks to be almost non-existent.

The top bezel does not seem to be as large as we expected given all the sensors in it. The top bezel is still smaller than the Pixel 3 from last year and while the front is not all display such as on the OPPO Reno or the OnePlus 7 Pro the bezel does not look to be as overpowering as we thought it would be.

The pictures of the front of the device are when it seems to be playing media which is when you would expect the notification bar to move to the top of the device or disappear entirely which is why the bezel seems so much smaller. There is a single front-facing camera visible but the other sensors in that bezel, including the sensors for Project Soli, are not visible from that angle. 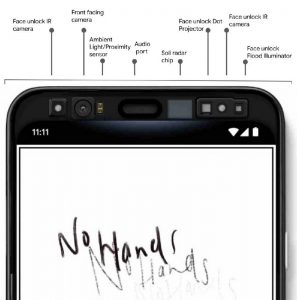 Isaac was also able to witness the new secure face unlock firsthand and was impressed with its speed. It would have to be extremely fast to match that in the OPPO phones (before the sliding cameras) but it is supposedly a lot more secure than any of those.

The camera app on this Google Pixel 4 prototype has undergone a complete redesign with less menu items on display but was unable to find out more about it.

Whether this really is a Google Pixel 4 is unknown. The supposed Google employee was unable to demonstrate any of the Soli capabilities because apparently they were “locked down” on this prototype. It seems strange that Google would allow a Pixel 4 out into the wild without some form of case to hide its identity, but stranger things have happened.

We say take this leak with the usual grain of salt. What do you think? IF this is the Google Pixel 4 do you like the look of it.

Very exciting! I’ll be upgrading from my beloved Pixel 2 XL and can hardly wait! I had a Nexus 6 before this and loved that massive phone, too. Great news.. hope it’s true.
Thank you. 😊

Stupid article. I don’t why ppl are saying it’s good or don’t care about the forehead and chin. The design is bad I don’t know what’s the point of saying it otherwise. Don’t encourage them. Their designers are the worst in the world.

Stupid article. I don’t why ppl are saying it’s good or don’t care about the forehead and chin. The design is bad I don’t know what’s the point of saying it otherwise. Don’t encourage them. Their designers are the worst in the world.

With the issues I’ve had with Pixel 3XL, pixel 4’5’6 or any is not even worth a thought. And not just one phone, but several replacement phones.

I’m already out. I’ve owned the XL, 2XL and 3XL. All have been pretty good, not outstanding. Recently jumped to the OnePlus 7 Pro. Liking it a lot so far.

Quite a clickbait headline unfortunately. No new news other than some grainy photos.

Amount of leaks phone are having, it’s either they don’t care anymore or they are doing it on purpose. How did the guy know it was a google employee though.

he did not say- i’m assuming he asked in conversation…. long flight?