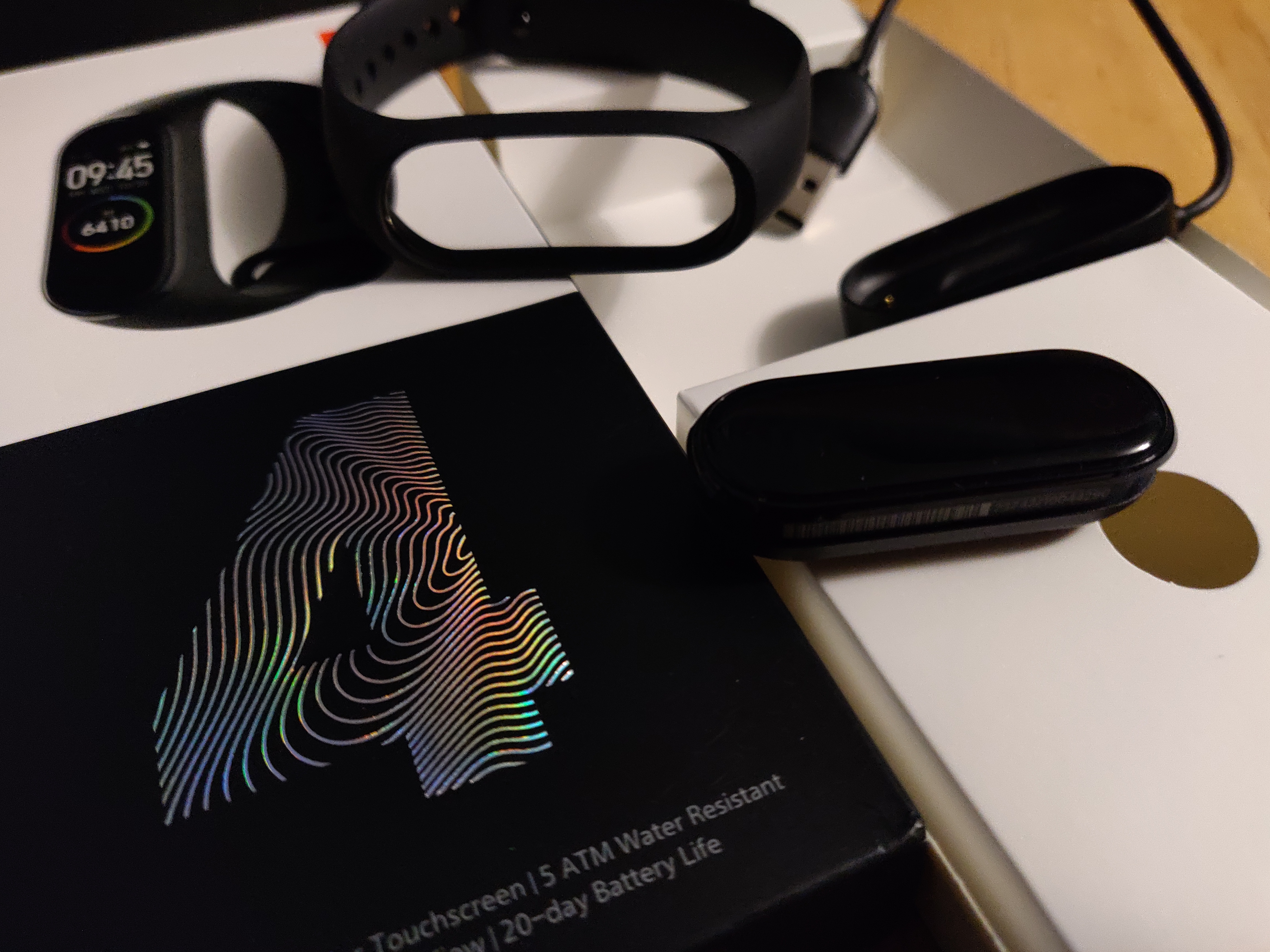 Fitness bands are big business and there’s a lot of options out there. Particularly with the decline of WearOS over the last 12 months, Smart fitness bands have been gaining market share. We recently took a look at the Fitbit Inspire HR and now we’ve got our hands on the Xiaomi MiBand 4 to take a closer look. Having used the MiBand, MiBand 1S ad the MiBand 2 I didn’t have any issues adjusting to it and understanding the functions quickly. They were a bit late to the party compared some of the other manufacturers, but Xiaomi have made quite an impact on the market.

The old adage is that first impressions last and when you deal with a setup as easy as pressing pair device on your phone, the first impression here is a very good one. But that’s not all it’s good at.

There’s some pretty impressive factors to the user experience with Xiaomi fitness bands. The MiBand 4 is an excellent evolution from the previous models I’ve used and has resulted in an excellent, non intrusive daily experience.

The screen response is brilliant, despite looking for issues; I just can’t find them. There’s no false touches, no lag and no missed touches. The bottom of the screen works as a “home” button that returns you back 1 menu level making navigation very easy. The end result of the menu design and touch response is a simple touch based UI that anyone can use, simply and learn easily. 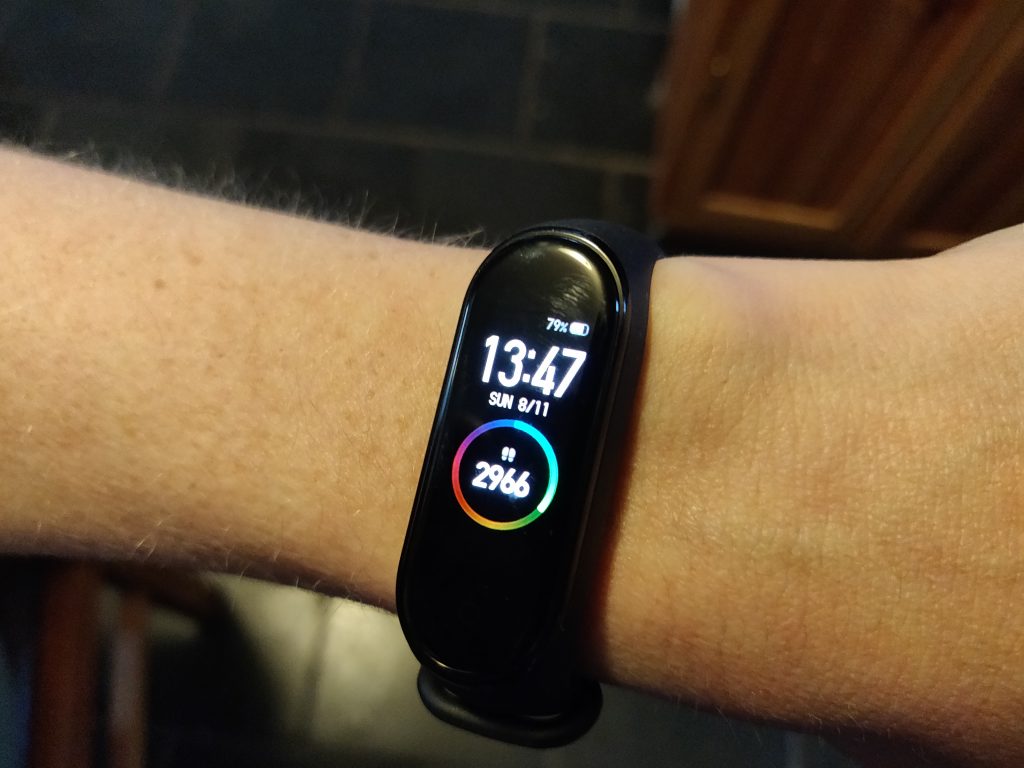 There’s a surprisingly broad range of functions for such a relatively cheap device. Let’s start with the basics for an activity tracker, it will track your daily steps, distance covered, calories burned and give you idle alerts when you’ve been sitting still too long. For those who want to do so, you can also track your sleep and heart rate throughout the day.

On top of that though, it’s capable of tracking

It’s worth noting with the functions that track distances, it’s actually using your phone’s GPS. So you will need to ensure thats on for accurate tracking of your activities.

A few other features I was really fond of are the simple interface for music controls, call alerts, the fact you can accept or reject calls from the device and SMS alerts on it. All really simple functions grand scheme but have added a lot of value in my eyes to a simple device.

The hardware really hits the mark when you look at the target market. It’s lightweight at 22.1g, has a 135mAh battery which will last about 3 weeks – I’ll happily attest to this, is 5ATM rated for weather, water and daily rigours and connects to your phone via Bluetooth 5.0 so it uses very little energy.

Here’s the big question I have had for some time, how do users decide what is accurate in terms of step and activity counting? If you go by price, then the like of Garmin devices is going to be your go to. But that means that the Xiaomi is somewhat inaccurate.

I’ve worn my Garmin watch, the Fitbit Versa HR and MiBand 4 on the same day and found that the step count differed hugely. Across a week, this difference was always present. Honestly I’m just not sure what is the most accurate. The Garmin being the most expensive and has some GPS based, as well as Gyroscope tracking for your movement (on paper at least) should be the most accurate of the three. The Fitbit by reputation should also be trustworthy, but consistently produces the highest step count of all three devices.

I spent quite a bit of time and effort looking into this and believe what is happening is that the Fitbit is more actively tracking movement than the Xiaomi. What I mean by this is that the Fitbit will track all of your steps throughout the day.

This includes the incidental 5 steps here and there, but the Garmin and Xiaomi need to be activated by the Gyroscope for a short while (around 15 seconds) before it starts tracking steps actively – so if you’re regularly at a desk, then grab a coffee or water, you’re likely to miss those incidental steps in your days tracking. That being said, if you’re consistently active throughout the day – the gap between the Xiaomi and the Garmin are significantly reduced and the Fitbit is far less “excessive” with the step count in comparison.

Out of the box, the light weight of the band plus its shape means that it was extremely comfortable. My concern is with the material used on the band: Having had previous models, I found the band became a touch brital and failed over time and this feels the same so I have a concern that over time it may do the same.

Outside of my concern based on experience and the potential accuracy issues, I can’t really find anything major to criticize. The MiBand 4 is well specced and delivers on what it promises.

Is it comfortable enough to wear all day?

It’s a device that’s really easy to wear 24 hours a day. It’s very comfortable, physically small, it’s lightweight and the battery lasts so long – you can basically forget it’s on your wrist. It really isn’t a trouble or particularly noticeable to wear throughout your day.

The MiBand 4 comes with a one size fits all wristband. What I mean by this is that the band genuinely fits just about anyone out of the box. It’s got a huge amount of adjustability on it. I suspect that more petite women won’t like it a heap due to the doubling over of the band when it’s on.

For someone who has an average to large size wrist though, you’ll be perfectly fine with the band and in all honesty pretty happy with the comfort of it.

The Xiaomi app is extremely simple, much like the device. Easy to use, easy to navigate and delivers what you expect from it. All of the functions that the band can track are there. The front page is extremely simple to understand: It shows your steps for the day, sleep last night, current heart rate, weight (manual entry) and your step streak.

Each of these have drill down options to view the data in far more detail. Heart rate tracking across days at a time and during workouts. Sleep tracking for all nights where you’ve worn the device overnight and your steps across periods of time including against your set goals.

At the top you’ll find simple triggers to begin activity tracking for walking, running and cycling. This will use your phone’s GPS but the step counter from the device. It’s handy to just keep track of your activities and (if you’re that way inclined) sync data to Google Fit.

Keeping it simple is the name of the game with the Xiaomi MiBand 4. This is not just isolated to the hardware, but the app itself is very simple too. There isn’t any options for customisation within the app, but there really isn’t any real need to do so. It just works!

Is the battery as good as they claim?

The claim from Xiaomi is 20 days of battery life, which honestly makes it one of the best battery life devices around. After wearing the device all day for several weeks, the claim from Xiaomi is bang on. I was tracking between 4 and 7 activities a week on top of step and sleep tracking throughout the day. If you were only using the MiBand to track steps and sleep, or reduce the notifications and call handling – you’ll get closer to 4 weeks than the 20 days promised.

The charger is an interesting setup, the MiBand detaches from the wristband and seats in the charger. While it’s perfectly functional, if you’ve got USB wall sockets, or chargers hidden away then the short length of the cable makes this a little awkward to utilize. If you’re a serious fitness buff who tracks, reviews and analyses data closely then this is not the fitness band for you. If you’re only wanting to track your steps to get a bit of an idea about your step count to decide whether or not you should go for a walk in the evening, this is probably too much device for your needs but a good upgrade from the very entry level devices.

Where the Xiaomi MiBand 4 excels is folk like myself who enjoy a bit of exercise, want to get an idea of how active they’ve been generally and don’t have a fortune to spend on the top range activity tracking or GPS gear. The Xiaomi MiBand 4 offers some pretty broad functionality to track daily life, its lightweight, non-intrusive into your daily life and perhaps most importantly – it’s very affordable. You can get a hold of one from the Mi Store for $59.00 and start your tracking for better general health.

My dislike on Band 4 – eg when you set Timer for 30 or 99 minutes (max) you cannot exit to Home Clock face to read the time, date or steps until you stopped the Timer!
Same for Stopwatch, Workout module etc

PSA
Since the app got updated to Version 4, it now displays ads. Pretty poor for a companion app to a purchased product

“I suspect that more petite women won’t like it a heap due to the doubling over of the band when it’s on.” I’m ok with it, I’m used to wearing it full time. It actually fits snugly on my wrist this time. The only other mi band I’ve owned is the first version and that was a bit too big for me, even on the smallest setting. It would spin around a tad, which I found annoying. I’m wearing my mi band 4 on the second smallest setting which means it can get even smaller!!! Can probably fit a tween.… Read more »

Mi Band 4 is useless at swim tracking. I got mine the week after it was announced and it was horrendous. Waiting now for Honor Band 5 to arrive.

Nice detailed review. Curious how you feel about it in the next few months. All the MiBands have the same issue and that is the main device pops out of the band at unusual times and can easily be lost. The more you put it in and out of the band the looser it likely gets… unfortunately they force you to do this just to charge.

Great review, but I think you forgot to add the Mi Store hyperlink at the end.