A couple of weeks ago we saw a leak from Evan Blass showing the new Fitbit Versa with what appeared to be Amazon Alexa onboard. Overnight a new leak has surfaced showing the retail package of what will be called the Fitbit Versa 2.

The Fitbit Versa 2, according to this and the last leak will have an extremely similar design to the original Fitbit Versa with removable bands that can be washed or changed to other Fitbit Versa bands.

Fitbit’s new smartwatch will include voice control through Amazon Alexa although it is unclear just what Alexa will control — possibly nothing on the watch but if you could use it to send and reply to messages that would be handy. The retail packaging does not give much away in this instance apart from “make life easier with Amazon Alexa”.

A leak of a wearer using the assistant on the watch shows that it will be able to control your Amazon Alexa connected devices only at this stage. Due to the permanence and position of Alexa on the packaging it does not seem likely that Google Assistant will be added in this generation or any time soon after. 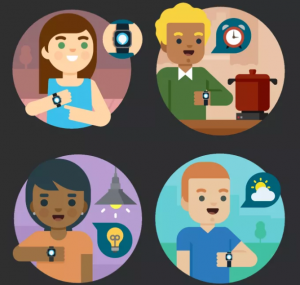 Along with a four day battery life the packaging confirms that it will also be swimproof, have an always on display mode, and have the ability to store and play over 300 songs. All other features present in the Fitbit Versa will be present in the Versa 2 according to the packaging making it a compelling purchase — which of course depends on the price point it begins at.

The leak was accompanied by an announcement date of August 25 with availability starting from September 15. We expect it to land in Australia around the same time and will bring you all the details as soon as we have them on hand.

Shame, it would otherwise be quite good with that four day battery life