Home Mobiles The OnePlus 7T series is coming next week

On a day when Google announce the date for their next Made By Google event OnePlus have sent out a teaser for their next event — the OnePlus 7T series unveiling.

We all know / knew that that the OnePlus 7T was on the way but this is the first official teaser we have seen from OnePlus. Aside from the date that it is coming the short video does not reveal much new at all.

The Tweet and video by OnePlus points towards their website where the date of September 26 (EDT) is revealed — along with the fact that the 7T series will have a 90Hz display somewhere in its midst. 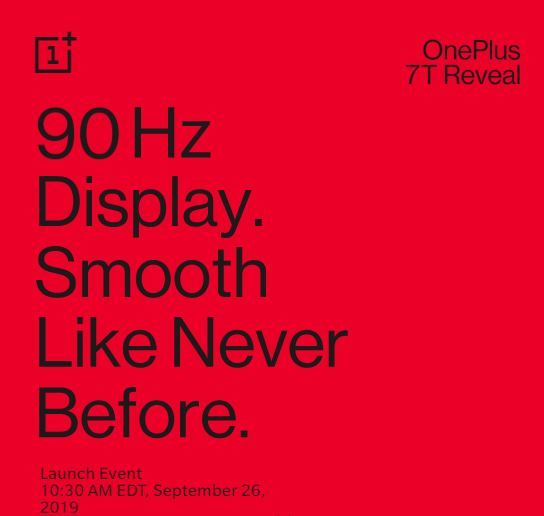 While rumours have point at only a mid-range version being released and not a new Pro version it would be a big surprise for OnePlus not to update their mid-year flagship with a new processor and some new camera features, just have they have done every other year. The OnePlus 7 Pro has a curved display which is prone to accidental touches in every day use due to the sheer size of the device — stick a flat display on it and the device would be near perfect.

Given that OnePlus refer to the launch as a series of phones being launched we have very little doubt that there will be at least a OnePlus 7T and a OnePlus 7T Pro announced by OnePlus at the launch event.

Just like with every single device launched these days we have no doubt that leaks of the OnePlus 7T devices will continue in the coming days until the official unveiling. Given OnePlus’ history expect them to get on the front foot and reveal details of the phones before the official announcement.

Anyone here excited for the second OnePlus flagship of the year? Keep an eye out for more details on it and other offerings by OnePlus here in the coming weeks.

Hard to get excited about them if they do not even bother to have them on sale here .

I hope JB Hi-Fi signs a deal with them like Xiaomi and Vivo did.
Without a local, Australian presence and warranty phones like One Plus aren’t worth considering.

Do you know if an Australian carrier will stock them as they do in the Us?