As expected the two models include the Shield TV Pro that looks very similar to the first two generations and the new Shield TV that has been shrunk down to a small cylinder but still packs all the power most users will want.

The Shield TV has a Gigabit LAN, Dual Band WiFi, a Micro SD card reader, 2 GB of RAM paired with 8 GB of on-board storage. The Shield TV will retail for $149 USD which means it should sell for around $230 AUD if it hits Australian Shores.

The Shield TV Pro has all the same features as the smaller Shield TV and ups the RAM to 3 GB with 1 6GB of on-board storage and includes 2 USB A ports for attaching external HDD and accessories. The Shield TV Pro is selling for $299 USD giving us a local retail cost of around $450 AUD.

The new Shield remote has a triangular design, a designated Netflix button, replaceable AAA batteries, Google Assistant button, motion-activated backlit buttons (eg they light up when you pick it up) and a “find my remote” feature using the NVIDIA Shield app meaning no more searching for your remote. They should have integrated the find my remote feature with the Google Assistant, that would have been awesome. 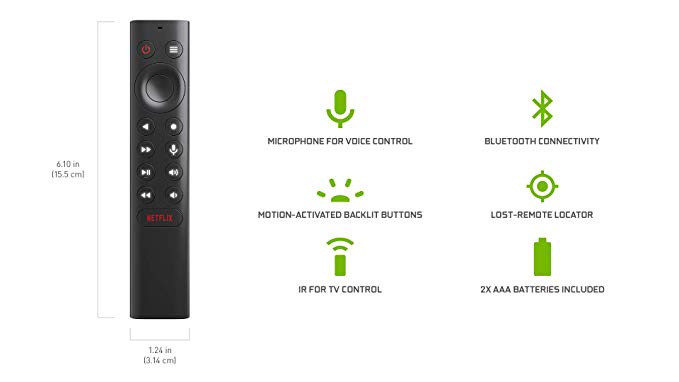 While neither device ship with a Shield Controller you can still buy them for $89 AUD each or bring your old controller over if you’re upgrading.

Overall the 2019 Shield range seems to be an improvement across the board, better processors, greatly improved video and audio capabilities, On-device AI for up-scaling and all of the other features we’ve come to expect from NVIDIA Shield, Android TV and the Google Assistant all in one well-priced device.

We still think that the NVIDIA Shield Pro is missing 1 ‘pro’ feature, and that’s a coaxial input. So much of the world still rely on antenna tuners that including a Digital Tuner on the device would make the Shield TV Pro perfect.

Honestly, the NVIDIA shield devices may just be the best value consumer technology devices on the market. With their history of longevity and support, and relatively low entry price to start with the NVIDIA Shied is outstanding value. We have reached out to NVIDIA Australia to enquire on local availability, the Shield TV and Shield TV pro will launch initially in U.S., Canada and select European countries

Thanks for your polite and respectful reply, when calculating overseas to AUD conversions we often try and include in multiple factors including exchange rates, GST and the typical “Australia Tax” we seem to pay for consumer electronics. We often tend higher than lower when converting. Telling readers to expect to pay $300 AUD for a device and it coming in at closer to $050 would make more readers feel mislead than the occasional person complaining about conversion rates. Thanks for reading.

Thanks, I’m not referring to the AUD conversion price. I’m talking about the USD list price – in the states it is $199 USD, and not $299 as you have quoted in your article. Up to you what you change the AUD conversion to but at least get the USD correct so that readers can do their own conversions if they want to.

Wish it could do HDMI / DP passthrough.

Vodafone TV has a Digital TV tuner built-in for $70. Why can’t a $450 Nvidia Shield Pro have one?

Tom Palmer you are speaking my language my friend

I’ve just perchased two Nvidia shield TV units both with two controllers. I’m impressed with the performance and ease of function. The remote sensor slide controller can be tricky until you get use to it. But wow what a great piece of tech.. I’m keen to try the new Nvidia pro..

Hey mate, error in the currency conversion. Wish it were true but yeah.

thanks, copied from the wrong side of the calculator 🙂

Same thoughts, and a TV tuner would have made it an ultimate Android TV box