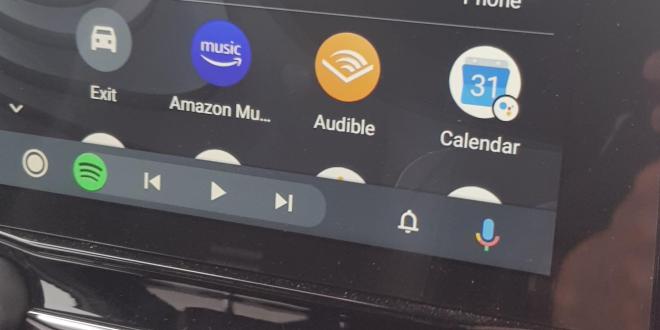 Android Auto has already had some pretty major changes to its UI this year but it seems that Google are not stopping there with some tweaking of the UI set to arrive very soon. In a recent update Google added in some nice changes that will improve the Android Auto UI even more.

XDA Developers tore it apart a couple of days ago and found a new string that will finally bring back a permanently viewable weather temperature. The weather used to be displayed on the home screen of Android Auto but there is no home screen anymore and the weather has been relegated to an app hidden in the app drawer.

The new update shows strings though that will enable the weather to be shown on the status bar of the car’s Android Auto display:

Android Police were able to activate the string themselves and it didn’t do much other than add a small temperature reading next to the icons at the top right of the status bar — better than nothing though.

At the moment every single app you have on your phone that is Android Auto compatible is displayed within the app drawer of your display — and the top two rows are sorted by when you last accessed them.

The new APK shows that the app drawer will be able to be customised and in two different ways. One method involves long pressing on an app on the car’s display and editing it from there and the other seemingly safer method is within the new “Customize launcher” setting within the app’s settings.


The setting allows you to hide apps from the launcher so that only those that you actually use are shown there (for example, why do I need a Telegram icon in the app drawer currently?). This is interesting though as Google as deprecating the Android Auto app from the Play Store now that they have baked it in to Android 10 so we suspect the long press will become the default action in time.

These are some decent changes to Android Auto and although they may seem minor on the surface they will make a large difference to everyday usage of it. You can be sure that the Google Android Auto team will be hard at work bringing even more useful changes to the UI but until then let’s just wait for this one to become live. It is expected to do so with a server side flick of a switch in the next few weeks.