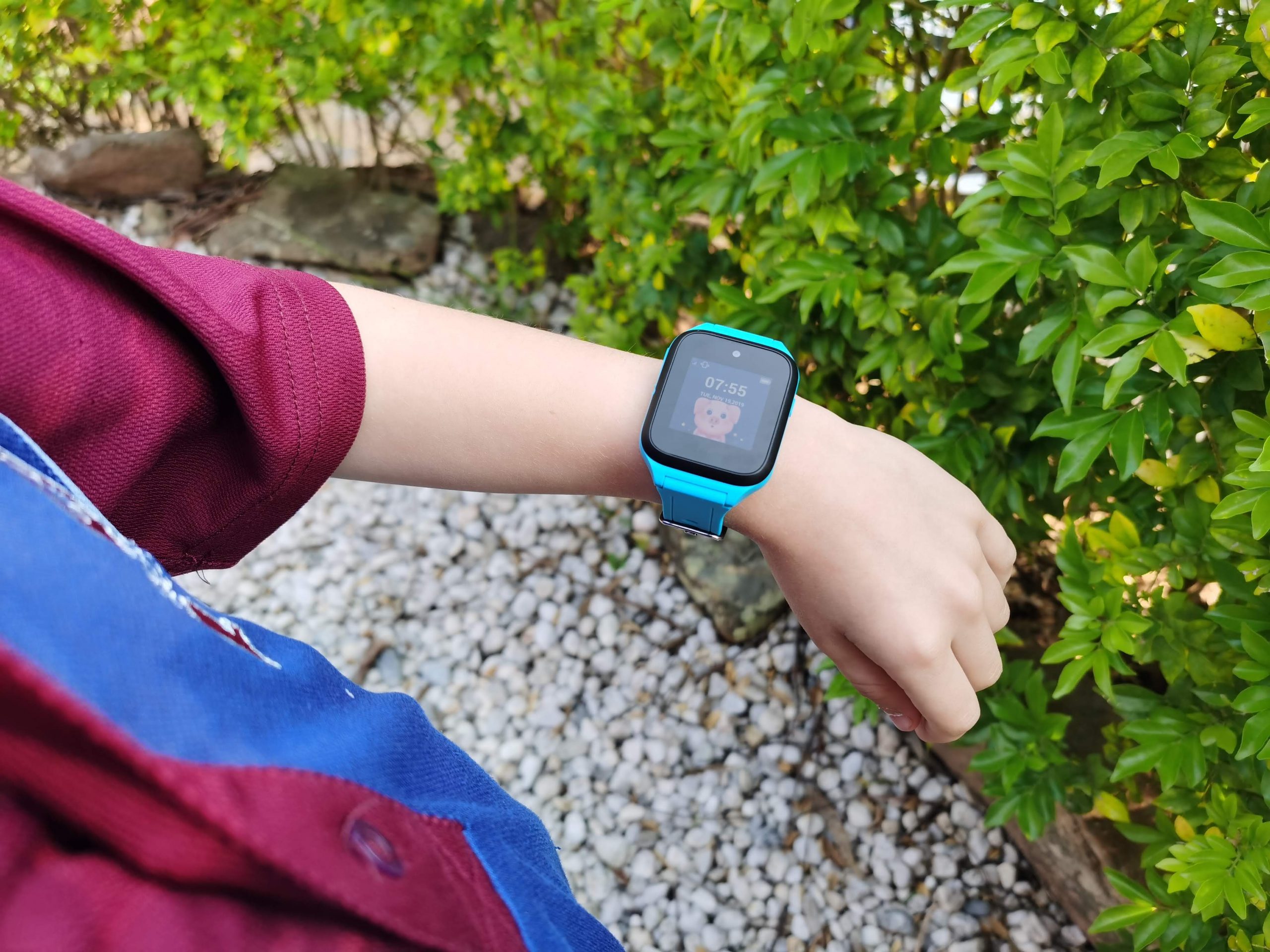 Just earlier this year, my son and I reviewed his first smartwatch – an Alcatel Movetime Family Watch. He enjoyed the experience, but more importantly, he loved the idea of the watch. It gave him a means of independence that he mightn’t otherwise have at his age, and it did so without it being a smartphone or something easily lost or stolen.

Sure, there will be those that will say kids don’t need connected devices … just as many years ago, people argued kids didn’t need to use computers, or before that, use paper and pens when they couldn’t master the use of a slate and chalk.

Like it or not, we live in an era of connected technology, and I’d rather my kids were familiar with it rather than kept away from it, so they know the benefits, the risks, and how to treat technology – like everything else – with a health respect.

It’s with that in mind that, when offered, we decided together to review TCL’s new 4G Movetime watch which was announced a couple of months back. It offers some improvements over the 3G model we reviewed earlier in the year, and a couple of little catches too. The core functionality is the same, but there’s some welcome new features, too. Like the 3G variant before it, this is a fairly simple smartwatch. It looks like any other kids watch (except perhaps a bit thicker), and has the normal watch functions your kid is likely to use. You can tell the time, play a few simple games, use a calculator, see the weather and – new in this version – count your steps, too.

There’s connected smart features too. The 4G Movetime watch has a SIM card slot and, when you chuck a 4G-capable SIM in, you get access to a range of connected options. Weather that updates for your location, calls, SMS and messaging, as well as video calls.

Before you think “oh my god that sounds risky as hell!” rest assured, it’s pretty locked down. For starters, your kids can only call approved contacts (in our case, me and my partner) and – if you allow them to – friends who have the same watch. They can’t receive SMS from un-specified numbers (unless you turn such a feature on), they can’t receive calls from un-specified numbers (the watch just hangs up on them), and location and messaging are restricted to (a) the account that set the watch up and (b) anyone else you share an authentication code with.

In short, TCL has invested a bit of time and effort into making sure that some unknown 3rd party can’t call, message or track your kids. I guess if someone guessed your email address and your password, they could log in as you, and this is why you should always use a secure password that isn’t easily guessed.

Another huge selling point? There’s no subscriptions here. Buy the watch, and tracking, messaging and more are included for free. The only ongoing cost is a SIM and mobile service to pop in the watch, which might cost just $5-10 a month.

What can your kid do with the 4G Movetime watch?

Because this smartwatch gives our son a way of staying in touch when he’s not physically with us, it allows us to extend him a bit of trust (and trust in his safety) that we mightn’t otherwise. For example, he catches the bus, and we can tell when he arrives at school and if he were to leave during the day, we get notifications.

In the afternoon, if we were minded to have him catch the bus home, the watch would allow him to call us in the event that the bus was late or didn’t show up, and we could make alternative arrangements.

None of this is new to the 4G Movetime watch from TCL, though – the earlier model could do all of this too.

What is new is the video call function which means that – beyond just a voice call – you and your kid can catch up for a video call. Granted, this just isn’t something I can see us using much, because I don’t really want him making video calls while he’s at school. You can also use the camera on the watch to take photos (selfies, mainly) and send them to contacts … so yes, we’ve had a few silly photos mainly of up my son’s nose during the day.

Good for a laugh.

There’s also an SOS button which will – when pushed – will send an SMS alert (it doesn’t use push notifications, to better assure it can get through even if there’s not enough signal for a data connection). These messages will give you a location, a time of activation and a link to click which’ll take you to a Google Map to find out where your kid was when they pushed the button.

To avoid your kid getting in trouble at school, you can disable certain features during class time to make sure they don’t muck around when they should be learning.

Of course, like anything new, for the first little bit any kid is going to muck around with a new toy, but once that novelty wears off, this smartwatch becomes a useful tool rather than a toy. What do kids think of it?

I asked my son what he likes about the TCL 4G Movetime watch:

Well, I like it because I can call mum and dad, and I like the music it plays when mum and dad call me.

I like that it can count my steps, so I know how many I’ve done during the day and it makes me want to do some more exercise.

I like how it has a game called “Pocket Mole” which I can play when I’m bored, like when I’m on the bus to school.

I also like that mum and dad can see where I am so if I get into trouble they can help me.

As far as I’m concerned, it’s as secure as a good password.

As with the previous model, the watch will reject calls and – if you configure it to – SMS from unknown numbers. It is handy, though, to leave that SMS feature turned on, because if you give your kids a prepaid SIM, that’s how you’ll get low balance notifications. On the previous generation, you knew you’d run out of credit when the watch just stopped working, so this is a bit more user friendly.

The real concern parents may have is someone else tracking your kids, and as noted above, unless they get your username and password, that’s fairly unlikely to happen. Unfortunately there’s no two factor authentication – to minimise the risk of someone being able to log in even if they do get your password – but maybe TCL will introduce that in a future version.

If you’re concerned about someone contacting your kids without your knowledge, turn off the SMS feature, and the only people who can contact your kid (and vice versa) are you and anyone else whose number you add to the watch.

As far as I’m concerned, that’s safe enough for now. However, as with anything, there’s no substitute for smart kids – talk to your kids about stranger danger, about not answering any calls or messages from people they don’t know, and not giving out their number (assuming they even know it) to anyone.

Does your kid need a smartwatch? The chances are the answer is no – they don’t need it, but it might be very helpful. Whether your kid needs a smartwatch or not is really a matter for you and your kids – what works for one family and their circumstances mightn’t work for another – and we wouldn’t want to advocate for one view or another.

For us, a smartwatch makes good sense: our son wants a degree of independence, and I’m happy to foster that with an appropriate safety net which this watch provides. There’s the question of privacy, but quite honestly – and as I said in the last review – my need / obligation to know where my kid is and whether he’s safe overrides any concerns about his privacy at age 6. This isn’t a watch aimed at teenagers (though they could of course use it), who are far more likely to want or demand a smartphone. However, a younger kid doesn’t need – and I’d argue shouldn’t have – a smartphone, making this is a reasonable compromise.

It also represents a great way to familiarise your kids with technology in a safe way so they can have a little respect for it and what it can do. That’s quite a valuable thing to teach.

Are there any downsides?

Like any smartwatch – especially a 4G connected smartwatch – the battery life isn’t super long. Unless your kid hammers the watch during the day, taking lots of photos and making lots of calls, you can expect a day’s use quite comfortably. You will need to charge it each night though.

Unlike the previous model, this one doesn’t use a magnetic clip-on charger. It requires a Micro-USB charger which can – for younger hands – be a bit fiddly to plug in. This time around, I find myself plugging it in more than my son does.

The TCL 4G Movetime watch goes on sale today, actually, for $199 from Big W and Australia Post, with no ongoing subscription after initial purchase.

To get full use out of the TCL 4G Movetime watch, you’ll need a nano SIM as well – whether you get a prepaid or add a SIM to your existing account is up to you, but bear in mind that the 4G nature of the watch – and in particular, use of any video calls or sharing photos taken on the watch – may use a bit of data.

That said, my son has had this and the prior generation watch for about seven months, and I think the total prepaid recharges has been around $30. Not bad for what it offers.

Can you use a prepaid sim with this watch?

Hi, will this watch work overseas? We are moving to the UK in 6 months and need to know if it will work with a UK SIM or even without a sum?
Thanks

Hi Heidi, it will work anywhere with 3G/4G coverage. It will work fine with a UK SIM, but yes it definitely needs a mobile service to work.

I’m surprised that TCL are not using a USB C connector for charging on this updated version.

I’m a little surprised they ditched the magnetic clip charger, that worked really well for the first generation watch.

All issues aside, can anyone offer a better watch phone for the price? Dick Tracey would be jealous of the scope of features with this product. I’m def gonna get this for my 10 yr daughter for xmas, $189 BigW. Amaysim for $10 1gb no contract seems acceptable.