Oppo’s Inno Day event in Shenzhen China yesterday gave us a look at the company’s future as it broadens is product offering and invests heavily in AI and IoT.

The company has been quietly evolving itself in the last few years, and presents very differently at the tail end of 2019 than the last time I visited, a few years ago. The plucky upstart of old has been replaced with a world-class technology company that’s more aware of its place in the market, and with designs on where it would like to be in the future. The company’s Shenzhen HQ is now located in one of the city’s most prestigious and well-known buildings, as it looks to make a name for itself outside of just smartphones. Oppo intends to be a technology leader, rather than a manufacturer.

Inno Day is less about a product launch and more about setting a direction for Oppo now and into the future. There’s a lot of talk about IoT, 5G, convergence and AI going on – common themes in this space at the moment, as industry luminaries look to work out just what we’re going to do with all this new, connected, high speed data transmission technology. But there’s still some new hardware to see. Oppo’s CEO Tony Chen announced an investment of AU$10 million in R&D over the next three years. The company wants an edge in cloud computing and AI – voice interactions, intelligent decision-making and the like -as it heads into the future. This matches up with the company’s recruitment activities over the past year, staffing up on this front.

For Oppo, it’s about moving beyond smartphones, although it won’t be leaving them behind. Smartphones are the core of our personal networks, and that won’t change in the future. The company is well known for its hardware prowess, and now wants to be known for providing more of the technology in our lives. T

To that end, the company offered a few hints and glimpses at some of the products it’s intending to bring to market, and some that it’s prototyping.

Oppo’s smartwatch is coming – earphones, too

We’ve expected Oppo to make this move for a while, and today they’ve confirmed that they’ll be introducing a smartwatch product. There’s a focus on fitness and personal health, which has been the big story in this space for while.

We don’t know anything else about the watch, though – specs, operating system, and capabilities remain a mystery. With other manufacturers making similarly long-awaited moves into this space, we think 2020 will be an interesting time for wearables.

Oppo also confirmed that it’s working on some kind of connected smart earphones as well, offering some kind of digital assistant with voice interaction. Like the watch though, the details remain a mystery.

A video was shown with some glimpses of these products, but it’s not clear whether they were concept designs or actual product.

The more important takeaway from this is Oppo’s intention to move into the space.

By far the more interesting demo was showing us the company’s new AR Glass product. If you immediately jump to Microsoft’s Hololens, you’re not far off base.

AR Glass doesn’t break the mold – it’s head-mounted, and places projections in your field of view with lenses in front of your eyes (you get a 40-degree field of view in the current generation). There’s also a couple of buttons facing forward and backward near each of your temples, so you can make some more definitive actions in some of the applications. The headset detects your hands with a forward-having camera, and can respond to some basic gesture interactions. As you might expect, there’s also surround sound.

We couldn’t really tell what’s powering the experience. A launcher was presented that looked a little like an Android dialog box to run the main AR application, but that’s far from proof.

There were three experiences on offer – a tour of the solar system that allows you to zoom in on planets and moons to find out more about them, a shooting game set in an underwater environment, and a map visualisation application that showed a 3D representation of Shenzhen, buildings and all. Of course, a product like this needs to be able to do more than this to make a case for itself to go beyond some kind of industrial workplace application (where Google’s Glass product ultimately found itself).

Oppo’s made it clear that AR Glass in this form is not headed for a commercial release, and that’s probably a good thing. We’d like to see some improvements to the gesture recognition and a wider field of view on hardware that’s destined for consumers’ hands. It’s connected to the world with a 5G sim card, although there’s a pretty clear WAN port visible on the back should you want to add it to your existing home network. There’s also USB and phone connectors on the back.

First shown off a few months ago, and not specifically called out on stage at Inno Day, Oppo also showed off its under-display camera technology at yesterday’s event.

The under-display camera is an impressive technical feat – they’ve literally placed a camera behind the screen in a prototype device. It can take photos through the display, with just enough light making it through the pixels to make the camera work. 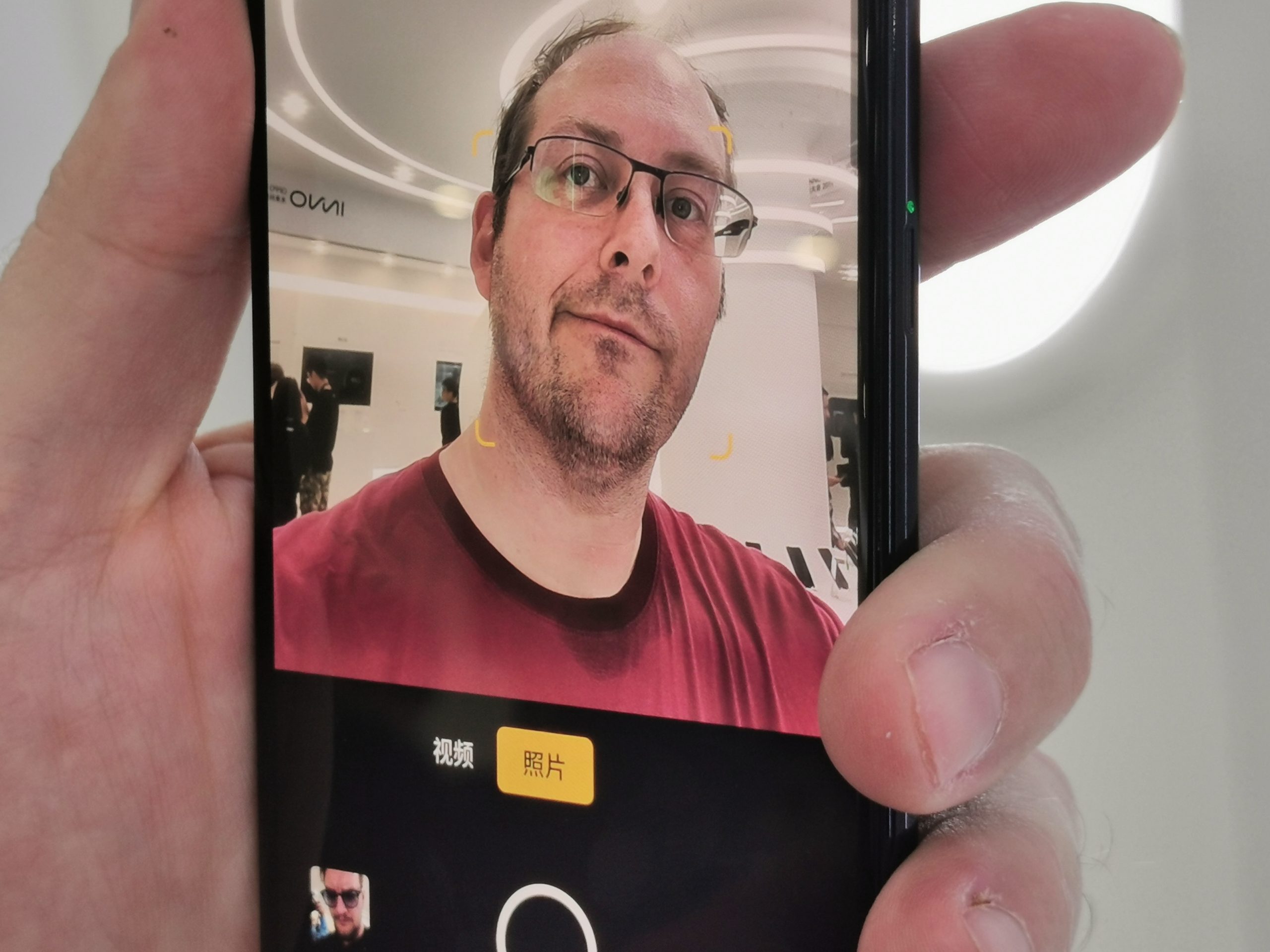 On the demo phone we used, the camera was dead centre at the top of the display, in the status bar / notification shade area. The phone’s UI was running in dark mode, making the surrounding pixels black and so the area above the camera was harder to make out. Flicking it into light mode, the area in front of the camera is more obvious as it forms a lower resolution region of the display and you can more clearly see the pixel formation in there. However, that’s all just detail – this could be the ultimate notch-killer. The demo area was flooded with bright light, making it hard to decide whether the camera was up to real-world tasks, but some soft detail was noticeable. Permanent beauty mode, maybe?

Jason travelled to China as a guest of Oppo to attend the company’s Inno Day 2019. event