Lenovo’s ThinkPad X1 Fold is the first ever foldable laptop shown at CES this year.

The screen is a 4:3 13.3-inch OLED unit with a resolution of 2048 x 1536 pixels that folds down the middle so you can run it in a traditional laptop form factor.

There’s plenty of flexibility in how you use this device – you could use it like a tablet thanks to its touchscreen, or prop it up on a stand to be used like a desktop computer monitor. It can even stand up on its own in landscape mode if you fold it slightly. 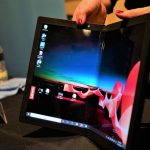 When the device is folded into portrait mode (like a traditional laptop) you can bring up an on-screen keyboard to type, or use the included Bluetooth keyboard that magnetically snaps to the display. The keyboard can be stored inside the folded screen when not in use, filling in the gap in the hinge.

The plus side of making a 13.3-inch screen fold in half is the sheer portability of it. The laptop is tiny, and weighs just under a kilogram. And despite its diminutive size, it’s not lacking in power – it has the latest Intel Core processors, 8GB of RAM and storage up to 1TB on an NVMe solid state drive. Lenovo reports the X1 Fold can run for 11 hours on battery, too.

The ThinkPad X1 Fold will release around the middle of the year starting at US$2499. That’s quite a lot of money, but if you’re into the concept of having an easy-to-use double screen setup, it may be worth it.