YouTube Music is the pathway forward for streaming music if you’re using Google. They’ve gone through a couple of iterations of streaming services already and YouTube Music has been subject to a fair bit of criticism. Personally I quite like it, but there are some issues in terms of feature parity with its predecessor: Google Play Music.

A criticism that has prevented a lot of users from migrating to YouTube Music is the lack of personal library. Although it should be taken with a pinch of salt, the APK teardown by 9to5Google suggests change is coming — it is just a matter of when hopefully.

The code in the teardown had the following included:

<string name=”library_artists_introducer_message”>Primary artists on albums and songs in your library will show up here. Artists you subscribe to are listed under subscriptions.</string>

<string name=”library_songs_introducer_message”>Songs from your albums will now show up here along with your added & liked songs – shuffle them all!</string>
<string name=”pref_library_management”>Manage library</string

I’m not an Android development expert, but it seems that the code is also specifically showing “your library” and the ability to manage your personal library. 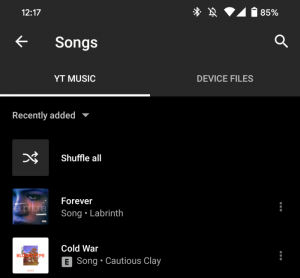 Seemingly all good news right? The code isn’t yet enabled and – as with any apk teardown – there’s no guarantee it will be. I believe the likelihood is that it will be since this removes a barrier for lots of users to migrate to YouTube Music permanently, something Google wants everyone to do.

I found that I could not cast to speaker groups when I tried it so never looked back. If I could cast a music video to a group that had both chromecast video devices and audio only devices, and only played the audio on the audio devices but video on the video devices then that would be a big improvement… But until it makes everything available in Google music then I hope I have a choice to change.

I don’t know if this is also part of Google’s push to YT Music, but now my Google Play Music streams 5 or 6 tracks, then freezes (and blocks all other data access). Only way to clear is restart. I LIKE Play Music and have uploaded albums and playlists I want to keep. YT Music seems to promote videos over music which is a problem if you are streaming to your head unit in car

They have us over a barrel too Shaun. I also subscribe to Amazon Prime which includes free music streaming. Not all songs are available with the free option but after a few hours of searching I found around 85% of my GPM playlist songs were available.
I was unable to find a mechanism to migrate my GPM playlists to Amazon so contacted customer support to be informed it wasn’t possible.

I would have had to individually search every single song from my GPM playlists to make new Amazon Music playlists.
Ugh, no thanks!

I’ve never even tried yt music, but I use Google play music daily, mainly in the car and on my Google home devices (all 13 of them*).
I wonder when Assistant will start saying “playing blah from you tube music” instead of Google play?

*They really have to stop giving away minis ;p

I recently complained to Google over in video promotions (ads) despite paying for YT Premium.
Google failed to respond but a week later received an email informing me I was being gifted a Charcoal Nest Mini including shipping for free. It literally arrived a couple of days ago.

The Nest Minis already default to Youtube Music thru the setup process, and you can’t change it over to Google Play Music until you’ve completed setup and go into the settings for the new one.

Ok, I wasn’t aware of that. Thanks for the heads up. 👍

There is a disconnect between the clickbait headless line on this article, and its content.
The headless line, claims the transfer of personal libraries to YTM will be forced on users of GPM.
The article simply looks at what was found in an APK teardown.

At this stage if it is appearing in the teardown it is fairly safe to assume that *at this stage* Google are going to implement transfers to YTM. And you would assume although the transfer will not be compulsory, they have signalled that the lifetime for GPM is not infinite and they are looking to shutter it as soon as they can get feature parity or close to it with YTM. The headline says they are preparing to transfer that which according to the strings in the apk is correct.

Thanks for making that detail clearer, Scott.
🙂

Nope, still not moving from GPM until Google migrates my carefully curated playlists. Until then l’m sticking with GPM.

I agree but hopefully this personal library transfer will include the playlists — i also have quite a few — how else will i easily play Metal Xmas music in December?

Scott, I would have thought playlist migration would have been one of the first jobs to tick off the list if the aim was to move subscribers from GPM to YTM.
What are we now, well over a year since YTM was introduced and still crickets. It honestly concerns me that Google seem to regard this objective with such little regard.

well, that would suck

Playlist transfer from GPM is what’s holding me back

Huzzah! I’ve been really trying to use YT music but this is a limitation. They seem to have fixed up some of the Android Auto issues (not least of which is now it continues playing where you left off).