The Motorola Razr is coming, and soon. Everyone’s nostalgia is peaking given most people had some form of flip phone when they were younger. Overnight another Razr surfaced, this one in gold.

Yes, Evan Blass has done it again and revealed a previously before unseen render of the Motorola Razr in a gold colour. There renders are high quality extremely official-looking renders and given the source we have no reason to doubt their validity.

The renders show the Razr with a gold textured back and gold chin. Aside from that there is not much else to be seen that we haven’t already seen before. What it does tell us is that Motorola is happy for it to be released in different colours though at $2700 a pink one would make it look cheap. 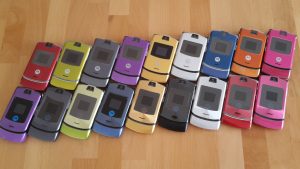 As for the pricing of the gold version you would hope it was the same price as the black Razr but gold looks more expensive — surely they couldn’t sell a phone at more than $2700? Is anyone here considering forking out $2700 for the upcoming Razr? Or waiting for the second generation and cheaper pricing?