While most of Australia is stirring and getting ready for work, Samsung has held its first Galaxy Unpacked event for 2020 in sunny San Francisco, announcing its newest S-series flagship.

As rumoured, the new phone is the Galaxy S20 – a series of smartphones with standard, plus and 5G models, and something really special at the high end. The phones will be available in Australia from March 6, with pre-orders open now.

Samsung has launched a Galaxy S20, a Galaxy S20+ and a Galaxy S20 Ultra, all designed with slightly differing specs to hit different price points. Australia will see seven SKUs with a variety of colours:

Samsung’s big focus (haha) is of course, the camera. The huge camera module we’ve seen in leaks for the last few months holds some pretty interesting hardware, you’ll see as we run down the models below.

Every Galaxy S20 model features an Ultra-wide, Wide and a Telephoto sensor on the rear, with some models also adding a DepthVision camera and the Ultra model featuring some significant changes to the camera specs.

Samsung’s playing up the AI smarts of the cameras, with extended features like enhanced Night Shot, massive zoom capabilities (up to 100x), and high resolution details. We’ve been saying that the “real” 5G phones would arrive a year or so after launch, and the Galaxy S20 is proving that to be true. The S20+ and S20 Ultra models both support bleeding-edge mmwave technology for the fastest of the 5G’s, while all 5G models support the nascent 5G sub-6 standard.

This is less important for us right now, but it does mean your shiny new phone isn’t just future-proofed for 5G networks, but also the next generation of 5G that’s coming soon.

The processor is a 7nm SoC featuring an Octa-core processor that should bring massive oomph on the performance front and some decent power efficiency. We just don’t know whether Australia will be seeing the Exynos version (as we have the last few generations) or if Samsung will switch us back to the Qualcomm Snapdragon processor as rumoured. We’ll seek clarification on this front from Samsung in the coming days.

The batteries are also generously sized, starting at 4,000mAh on the Galaxy S20, going to 4,500mAh on the S20+ and finally a whopping great 5,000mAh on the S20 Ultra. There’s potentially 120Hz refresh screens and 5G modems drawing on those batteries though, so we’re hoping they’re up to the task of running these phones all day long. All models feature wireless charging and fast charging on USB C. The other big feature that stands out for us is the display. Samsung’s known for their quality displays and they never disappoint on the flagship line. The Galaxy S20 will feature Quad HD+ Dynamic AMOLED 2X displays. They offer a 60Hz or 120Hz refresh rate, bringing the phones in line with flagship models from other manufacturers who’ve gone this route in the last year.

The display on each model is a Samsung Infinity O, which means its a full screen phone with a discretely-placed punch-hole camera thats in the top-center of the screen. This was a well-received setup on the Note 10 and it’s welcome on the Galaxy S20. The big daddy of them all, the Galaxy S20 Ultra, represents the pinnacle of Samsung’s smartphone evolution. They’ve thrown everything in. The Galaxy S20 Ultra has a massive 6.9-inch punch hole AMOLED display capable of 120Hz refresh rate and has four cameras in the bump on the back.

The rear camera is the highest specced setup of the three, with a 108MP main camera, a 12MP Ultra-wide, a time-of-flight sensor (the DepthVision camera) and Telephoto camera with 10x optical zoom. Using Samsung’s software you can obtain up to 100x zoom, although we’re not sure anyone’s ready for a smartphone that can zoom that far. Bring a tripod.

If you’re after the best of the best, this phone will likely see off all comers for some time. You can purchase the Galaxy S20 Ultra 5G with 12GB RAM and 128GB storage for $1,999 or with 16GMB RAM and 512GB of storage for $2,249. No word on whether the kitchen sink is actually included. The next in the line is the Galaxy S20+ which is slightly smaller with a 6.7-inch AMOLED display — once again with a 120Hz refresh rate and a punch hole for the front-facing camera.

The camera specs are a step down from the Ultra, but it’s no slouch. There’s a 12MP main camera, 12MP Ultra-wide camera and a 64MP Telephoto, with the Time of Flight (DepthVision) camera still along for the ride. 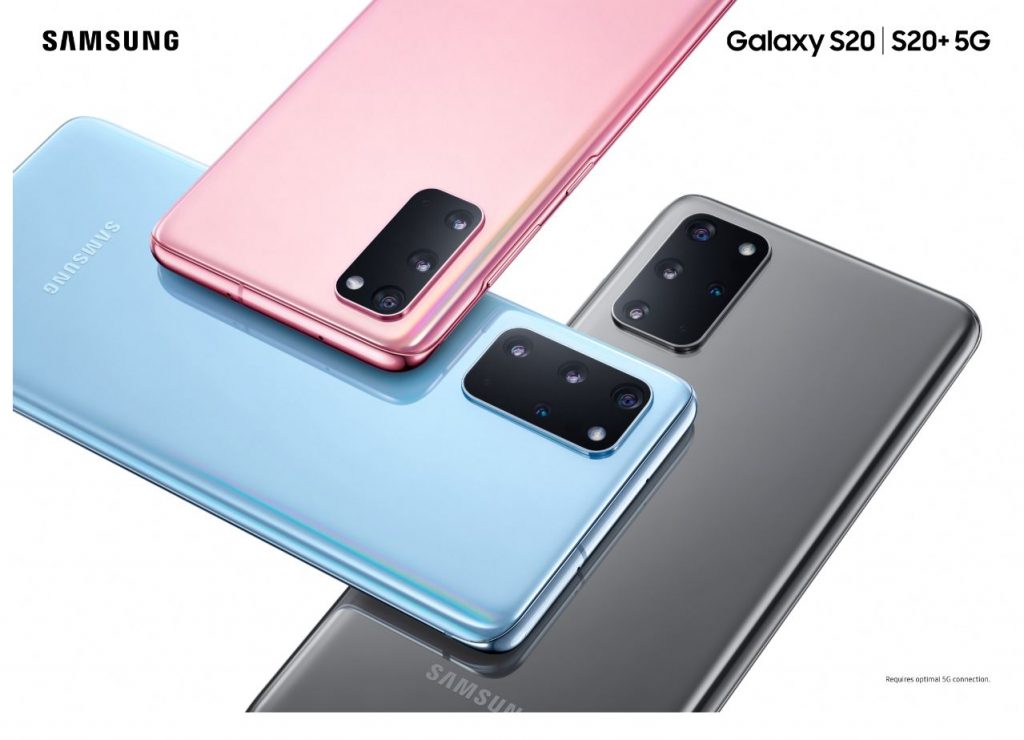 Once upon a time, there were no fancy plus or pro models, just a simple Galaxy S phone. In recent years, the Galaxy S phone that has no extra bits attached to its name has become the simplest device in the range, but it’s not to be sneezed at.

It’s a smaller device at 6.2-inches, but you’ll still get the 120Hz screen and the same triple camera as the S20+ (but without the Time of Flight sensor).

In fact, most of the Ausdroid team has nodded approvingly at the base model with 8GB RAM and 128GB storage, running a comparatively modest $1,349.

That’s a little higher than previous years’ base models, but the S20 represents a genuine step up from the S10 and other models before it. If you want great phone but don’t want to spend $2,249 to get one. If you’re sold, you can preorder from 6am today at various places around the country. Samsung’s own preorder page is live now.

If you’re buying the phone outright, you’ll be able to secure a set of Samsung’s true wireless Galaxy Buds+ (RRP $299) with your preorder of a Galaxy S20+ and a Galaxy S20 Ultra. Like most preorder offers, this one’s good until the day before launch – March 5.

We’re also expecting to see carrier deals go live over the course of the day and will let you know about them as details come to hand.

If you want to catch up on the announcements from Samsung itself, here’s the Livestream archive:

So is the release date in Australia on March 6th ot 8th? The article states both.

Also confused about the screen as the article states in one place that they come with both 60 and 120Hz. However nowhere else does it mention which ones are the 60Hz screens.

yeah, mkbhd and dave2d both confirmed that screen res drops to 1080p when run at 120hz

Thanks all for the replies.

Where’s the love for those who still want a phone that fits in your pockets, not that my current s8 quite fits in most of my pockets currently.

Guess I’ll be getting a cheap pixel 3a or 4a.

If Optus info is correct, then it’s the Exynos 990 package for Australia

Just confirmed with Samsung sales online chat, we get the inferior Exynos 990 here