Last evening in Madrid realme took to a non-MWC stage and announced their new flagships, the X50 Pro 5G, a device that packs just about every single high end spec you could ask for. Unfortunately there are no plans to bring it to our shores, yet.

The realme X50 Pro 5G is the first of five 5G devices realme are planning on releasing this year. The phone and realme did not pull too many surprises but they did not disappoint either. Hardware-wise, the phone will be packing a Qualcomm Snapdragon 865 processor with 5G capabilities. The big focus for realme was on the 5G speeds with the inclusion of a 360 degree surround antenna to produce perfect signal no matter how you hold the phone. They have also included a smart 4G/5G switch as the handover from one network to the other is often a challenge for carriers.

The X50 Pro also includes Wi-Fi 6 support, LPDDR5 RAM allowing for a 29% increase in read speed while requiring 14% less power consumption. The usual UFS 3.0 memory is also included but is combined with their own technologies called Turbo Write and High Performance Booster to provide stable read/write after long term use while at the same time increasing read/write speeds. 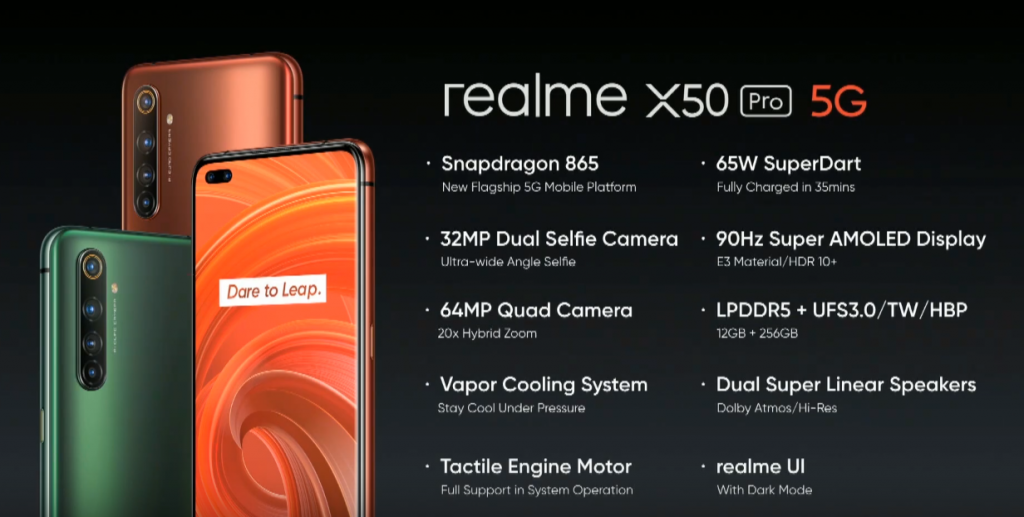 To dissipate some of the heat all of these specs produce they have included two layers of graphite film, conductive gel along with multi-layer copper gel. That heat dissipation also comes in handy when charging the device.

The dual-cell 4,200mAh battery is charged using their 65W SuperDart charging technology which can charge the battery from empty to full in just 35 minutes. the charger itself is a GaN charger which is a new advanced semi-conductor material which provides a smaller charger but at faster rates with less heat. They have also added support for 18W power delivery and Qualcomm quick charge.

We spend most of our lives looking at the display of our phones so you’d want a flagship to have a good one. While it’s not the best available it is a Samsung-made 90Hz refresh rate superAMOLED with a 180Hz sampling rate. It is just a 1080P resolution and has a 20:9 aspect ratio and dual punch hole for the selfie camera(s).

The display can reach 1000nits of peak brightness while producing 5% less power consumption. As for colour accuracy it apparently is 100% DCI-P3 colour gamut compliant.

The front facing camera is in fact a dual lens system through an oval holepunch which measures at just 4.41mm in width. It houses a 32MP wide-angles lens and an 8MP 105 degree ultra-wide angle lens. The rear camera system is a quad camera setup with a 64MP main camera, 8MP ultrawide and macro lens, B&W portrait lens and a 12MP telephotos lens (up to 20x zoom). The software for the camera has also been focused on with a smooth zoom technology and an improvement in their nightscape. The new nightscape, version 3.0 includes an ultra-nightscape mode and a tripod mode capable of capturing light for up to 50 seconds.

realme have finally included an NFC chip in their phone and thus can be used for Google Pay. There is also a dual channel GPS and dual speakers (there was no mention of stereo or not).

The phone will of course be running the new realme UI and not the ColorOS of previous realme smartphones. The new UI promises to be closer to a stock Android feel than ColorOS and we hope to check it out soon to bring you all the details of it.

Now before you get too excited it will most likely not be coming here. Ausdroid received this statement from a realme spokesperson:

realme takes a local approach when deciding which products we bring to market. This is based on extensive market research and the wants and needs of our growing customer base. While there are no immediate plans to bring the realme X50 Pro 5G variant to Australia, we will continue to evaluate the market opportunities.

Customers can rest assured that we will be bringing future 5G devices and AIoT products to Australia, as we look to make 5G a reality for all Australians.

The realme X50 Pro 5G is available in a Moss Green and a Red Rust finish and will start at EU599 for the 8GB/128GB model and go up to EU749 for the 12GB/256GB model. If they change their minds and do release it here expect it to be relative pricing. One thing for sure expect to see big things from realme in Australia this year.