In just over a weeks time OPPO will announce the Find X2 and Find X2 Pro, the next evolution in their Find series. As such the leaks are increasing as more promotional material is sent out via various channels.

Today we have seen a couple of posters leak out along with renders of the device showing both the Find X2 and the X2 Pro. The posters do not give a heap of new information but confirm that which we have already been told by OPPO VP Brian Shen — it will have a curved display with a 120Hz refresh rate. 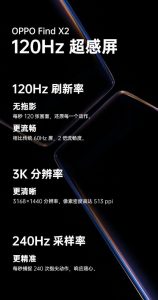 Official renders of the two smartphones were also shown off with the X2 shown in a black and a blue colour while the Pro version looks set to come in a black and a red colour. The front of the device shows what appears to be a very small hole punch to house the selfie camera — as expected.

The Find X2 renders show a triple rear camera and while the X2 Pro renders still show a triple rear camera there appears to be a square periscope camera for the 60x zoom Brian has told us about before now. OPPO are aiming high with their cameras once again and after improving immensely with the Reno 10x Zoom last year you can be sure they are hoping their new system, which includes the new Sony omni-directional focusing improves more again.

All these leaks came after one of the stranger promo videos we have seen was leaked for the OPPO Find X2 yesterday.

Only a week to go until the Find X2 will be announced. Do you think it will live up to the hype? Will you be checking one out before your next purchase? I know I will.

Oppo’s UI changes to the stock Android are some of the worst I’ve ever seen. Beautiful phones let down by the horrible UI. Unless they change it, and drastically, this phone will be a flop!