Many Australians think the NBN is a bit of a disappointment speed-wise, but there’s a big difference between having a bit of a whinge and having some data to back it up.

One of the sites I keep a reasonably close eye on is Speedtest by Ookla, and they regularly publish analytical and raw data on a regular basis.

A recent publication brings forward the mobile and fixed broadband speed rankings from around the world, and while the global average speeds might not seem that great – 74Mbps down and 40.8Mbps up is well within the NBN’s capabilities for some premises – the reality is a bit more grim. The data shows Australia has some of the top mobile networks in the world for data performance. With the likes of Telstra, Vodafone and Optus leading the way – regardless of your affinity to one or the other – we do have very good 4G connectivity ranking 9th worldwide.

Australia’s average mobile data throughput speeds as of January 2020 – shown below – are 63.85Mbps downstream and 14.70Mbps upstream. Obviously, these are average speeds – all three carriers can deliver speeds well in excess of these, but these averages are impressive nonetheless. Unlike our mobile broadband, though, our fixed line broadband speeds are outright embarrassing.

Our services deliver an average of 42.2Mbps/19.70Mbs and rank a lowly 64th globally. This lands us in the same realm as Uruguay, India, Kazakhstan and Vietnam. Even if the vast majority of homes did get a full 100Mbps downstream, that would only land Australia in 26th place or so on the global rankings.

This highlights that not only are we living in a hyper-connected world, but our infrastructure is also sub-standard and we’re not catching up. If anything, we’re falling behind as other economies catch up and eclipse our woeful NBN speeds.

But we have the potential to deliver high-speed services

Yes, we do but there are some problems with the broadband delivery on the NBN starting with service delivery methods other than fibre to the premises (FTTP). The issues are so widespread that just this week, Telstra has announced they no longer offer the high-speed promise for NBN FTTN, FTTB and FTTC customers.

It’s also noteworthy that the FTTN connection type is responsible for approximately 95% of the NBN connections that don’t deliver what they promise. 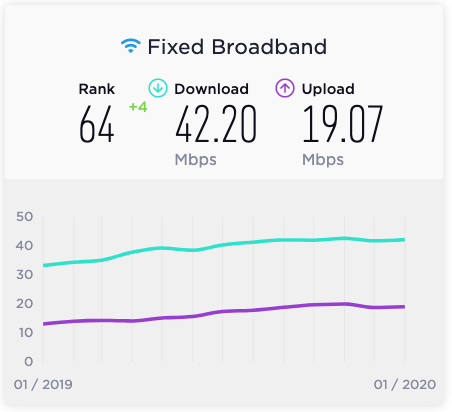 The fragmentation of the initially planned Fibre network, to a hybrid – use what’s available – approach, has not done many areas of Australia any favours. In many areas, they’re not seeing the speeds that were promised or no improvement in speed if they’re on the same technology. This has led to many households turning to 5G alternatives to get better speed and cheaper than an NBN connection.

There is so much technology available to provide faster connections. NBN Co had plans to provide connections of 750/50Mbps speeds and Aussie Broadband is one of a few who are already providing 250/25Mbps. It begs the question of why we’re still providing 12/1Mbps plans to anyone, even if you’ve only got a couple of connected devices it’s very easy to saturate that bandwidth.

There’s a lot at play here, not just the competitive spirit but also – bigger picture – the viability of Australian shores for big business. As users, we need to ensure that our elected officials know what we want. A core infrastructure that can deliver genuine high-speed connections consistently throughout the day and night, all year round. The NBN has faced hurdles, but things are slowly getting better.

With all the issues that users are facing with speed, our global ranking in terms of fixed broadband speed and at a cost – yet to be finalised – of over 51 Billion Dollars, is there any wonder that the NBN isn’t widely taken seriously?

I think the ‘average’ is a bit non-sensical given the extreme low availability of Gigabit plans on NBN. If you gave everyone on FTTP a free upgrade to Gigabit our average would jump substantially, yet the network hasn’t changed. A median speed is probably a more appropriate measure and I suspect we’d look a lot better. While I agree with the comments above that the LNP changes haven’t helped (FTTN was a horrible decision as was much of HFC, only FTTB and FTTC were sensible), the NBN was doomed from the start. The original Labor plan got the costings totally… Read more »

The question is not “who’s corruption screwed it up” (the answer is the LNP BTW) but how we go from this mess to something that’s not a joke. My suggestion is as follows: * Get rid of the speed tiers and download limits, everyone gets as fast as they can go, and as much as they need. $50pm price. * Anything below 100mbit is marked for fixing. For FTTN the obvious quick fix is FTTC, but a case can be made for FTTP rip and replace. * Rural service is focused on something like Elon’s Starlink, rather than wires. *… Read more »

Interesting ideas, but you didn’t mention who pays. One could argue part of the reason we are at this point is because fibre fanbois ignored the fact that Labor’s plan required ARPU (e.g. wholesale price) to rise above $100/month. If the community benefit argument had been put forward, like it is for roads, public transport, sporting stadiums, etc. the outcome might have been different.

I think if you could abolish speed tiers and accept quotas for most people this would be a better outcome.

We were late last year on holiday in New Zealand’s North Island and in Auckland they were advertising on a bus stop a minimal speed of 1000 GB a second for their broadband network. That was minimal, that was their basic offer. Kind of makes you wonder why we went so wrong.

A couple of years ago we were in a cheap motel near the Auckland Airport in a unit wit 2 bars on the wifi and the in-house wifi on our iPad ran 86mbps download. The LNP has frozen us in the past.

I think your memory does not serve you well, maybe you mean 1,000mbps not 1000GB. At “1000GB a second” you would be downloading 70 4K movies per second, no HDD could handle the download, your computer would explode and cause a rupture in space time!! Anyhow (back to reality) most download rates are measured in mbps not MB or in your example 1TB per second minimum!!

You’re right, I meant mb. Still way quicker than what we were given

A key difference is the incumbent monopoly provider agreed to split in NZ where as in Australia we handed Telstra $90 billion to rent some ducts with worthless copper.

There is a, minor, positive in the fixed line fraudband rankings, Phil. Australia has managed, somehow, claw its way up from 68th to 64th. The green coloured +4 between our ranking and our country name.

Is speed or quota the issue?

If speed is the issue then simply reverse Labor’s decision to add speed tiers to the NBN and we should jump up the rankings very quickly.

Sell SkyMuster (if the satellites still have any value) and offer SpaceX Starlink $75/month for each service will solve the regional broadband speed issue.

Speed IS the issue here. It’s not the idea of speed tiers, which needs to be reversed. It’s the infliction of FTTN, HFC, and HTTC, on Australia as part of the Liebral Notional Corporation’s Notional Fraudband Notwork which needs to be reversed.
The NFN alone, is why Australia has fraudband at obscene gouging prices, instead of the Real FTTP National Broadband Network. And until the NFN is replaced with the NBN, Australia will never have nationally accessible broadband internet again.

If I gave you a Ferrari, the speed limits would mean you could only drive it at 100Km/h. Labor’s speed tiers have the same impact. FTTN has had less impact because those who can afford a Ferrari (1Gbps) can afford upgrading to FTTP.

With your Ferrari scenario, the potholed and rutted country trails (the aged and failing copper phone lines) mean that the Ferrari could only be driven at 25Km/h, on a really good day. People see just how slow their best available speed is, and refuse to pay for faster speeds because they know they can’t get that, no matter how much those high speeds are touted. Saying that users should not have the choice to buy the speed they want, is stupid. The whole problem is the infliction of the NFN on Australia. Until the Real FTTP NBN replaces the NFN,… Read more »

No way to sugar coat it , our broadband NBN system is utter crap when compared to what we where promised. I remember when broadband or high speed cable first come out in Melbourne many years ago , for a while it in our household was pretty good for some time , and i might add with similar or better speed than we are getting with NBN now 🙂. I find that so amusing given all the promises that both the big parties told us where going to happen with NBN. The promises varied from it was going to be… Read more »

> No way to sugar coat it , our broadband NBN system is utter crap when compared to what we where promised.

Actually it is better than what you were promised.

Labor promised ~50% on 12Mbps and < 1% on 1Gbps in 2026. We exceeded their lower target significantly thanks to LNP cutting the price of CVC from $20/Mbps to $8/Mbps and bundling CVC with AVC to make 50Mbps the most attractive (profitable) plan for RSPs.

I was not clear im sorry Mathew , i was referring to the cost to get our country a " top of the line " internet system with speeds to match , what was the cost of the system that has still landed us with basically not much better than what we had ? when it rains or its windy i still get dodgy connection even though i have the new wizz bang broadband :) . How much has it cost the country for imo a 2nd rate out of date system that still lands us with copper wire in… Read more »

I don’t think anyone is suggesting NBN is world class, and Labor’s idea that Australians would pay (>$100/month wholesale) for world class was deluded.

However I think the reality for most in Australia of 50Mbps is better because of LNP price cuts than if they had been on Labor’s FTTP with 12Mbps expected to be the most common speed.

FTTP is nice but it isn’t a magic bullet without pricing structures that encourage fast speeds. The direction NBN is heading of more asymmetric speeds is a step backwards.