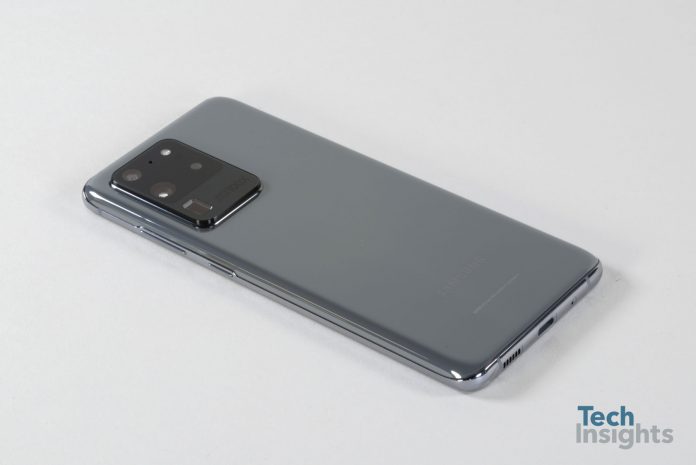 Each time a new flagship phone is released we rage over the new pricing introduced to us. At the same time we bemoan when certain phones miss out on features and hardware that we, who of course know better, know they should and could have included. The problem is that these parts cost money and with the pricing already high lines need to be drawn somewhere.

As MKBHD said, the Samsung Galaxy S20 Ultra is a phone with all the numbers and Samsung have thrown the kitchen sink at it. As such it does not seem to be lacking in any hardware features that we would like in a phone but unfortunately it comes at a cost — AU$2000!

Tech Insights have broken down the components of the Galaxy S20 Ultra to determine just how much it costs to build the phone — in parts alone. They included everything you could think of, all boards, all sensors, all processors. In the end they came up with a total cost of US$528.50. As you can see in the image above US$81 of that is the CPU chipset and US$67 for the best-in-class AMOLED display. The biggest cost comes for the camera modules and processors — US$107.50. We should not be surprised by this considering the emphasis Samsung have placed on not just the hardware of the camera on this phone but also the software. There is of course five sensors included in the camera array — the 108MP primary camera, the 48MP telephoto, 12MP ultrawide lens, the ToF sensor and don’t forget about the 40MP front-facing selfie camera. That’s a lot of high end hardware.

As a unionist I do need to remind you that we cannot forget about labour costs to build the phone and as a scientist to not forget about the cost of the R&D that went into this phone. Add in shipping and distribution, advertising (we all know how much Samsung love to advertise), packaging and accessories and of course the wages of the people who sell you the phone (assuming you buy from a Samsung store) and the cost of the phone adds up very quickly.

If we want this high end hardware and software innovations in the marketplace then we need phones like this willing to push the envelope. OF course for those who cannot afford these numbers there is a trickle down effect where once the costs of components decrease they will eventually make it into the cheaper mid-range phones — it has with multiple camera arrays and in-display fingerprint sensors.

The Samsung Galaxy S20 Ultra is expensive for a reason. It has every piece of hardware possible within it and that hardware is not cheap. Converting the above costs to Aussie dollarydoos it comes out at about a third of the cost of the phone (AU$673), not accounting for the extras mentioned above.

This sort of device is what the market needs to keep pushing it forward and even though only a fraction of the community can actually afford or want to afford this phone I am glad they’ve built it. In the end we all benefit.

Replacement screen for S20 Ultra will be about $400AUD lol what an absolute joke from Samsung! There is not $300+ worth of labour in replacing that screen. Having a look at the A series, they can be replaced for $100-150. Nothing much on their Australian site but in Singapore: https://www.samsung.com/sg/support/mobile-devices/what-are-the-recommended-pricing-for-galaxy-smartphone-screen-replacement/ https://www.samsung.com/us/support/repair/pricing/ They think because you’ve an expensive phone that you’ll somehow pay a premium just to have it replaced? As a guess from those prices, labour should be about $90…don’t think A series would be any different from a S series because they’re all unibody so same process to open… Read more »

Samsung’s overcharging on its phones have seen its market share eroded by Chinese companies who sell similar phones for much less money and sell more of them to make a decent profit. Much of Samsung and Apple’s ‘innovation’ is actually outsourced to third party companies, which is a strategy the Chinese companies have and will continue to copy while selling their phones cheaper and further eroding market share of the big two over time.

The key difference would be advertising margin. Another major concern is that you get 2 major OS updates. Ridiculous for a $2k phone

Certainly more updates would be nice across the board for the android platform , it is somewhat lack lustre .
When you say the opposition Greg , are you meaning apple ?

Not saying sammy does not charge a fair wack for its phones , but when you say chinese companies that sell ” similar phones for much less money ” , it has been my observation generally those that sell for ” much less ” actually offer much less in hardware and features , by all means if you have some examples of cheaper similar equipped models …. do tell .