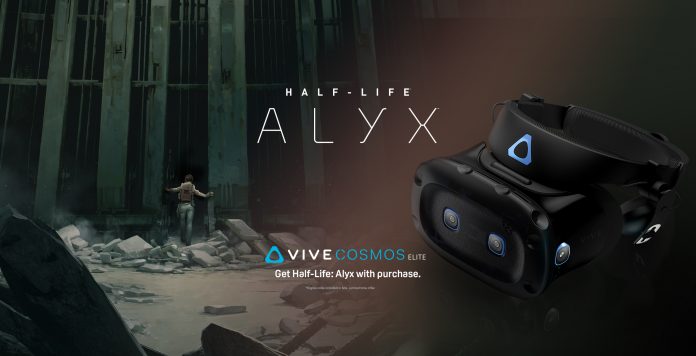 We took a look at HTC’s upcoming expansion of its Vive Cosmos range a few weeks ago, and today’s the day you’ve been waiting for, if you’re into the top-specced version of HTC’s VR headset.

HTC’s packing in the content with their premium headset – Vive Cosmos Elite already comes with 6 months of Viveport access, and the addition of the highly-anticipated Half-Life: Alyx makes that upgrade even better value for money.

You can purchase Vive Cosmos Elite now at the HTC Vive AU website – you’ll get a redemption code for Half-Life: Alyx when the game becomes available on March 23.

There’s a lot of buzz around Half-Life: Alyx, and HTC’s pretty excited to be able to pack in what’s looking like the VR “killer app”.

Who wouldn’t want to take a trip back into the Half-Life universe?

Half-Life: Alyx is Valve’s VR return to the Half-Life series. It’s the story of an impossible fight against a vicious alien race known as the Combine, set between the events of Half-Life and Half-Life 2.

Playing as Alyx Vance, you are humanity’s only chance for survival. The Combine’s control of the planet since the Black Mesa incident has only strengthened as they corral the remaining population in cities. Among them are some of Earth’s greatest scientists: you and your father, Dr. Eli Vance.

Head over to the HTC Vive AU website to place your order.