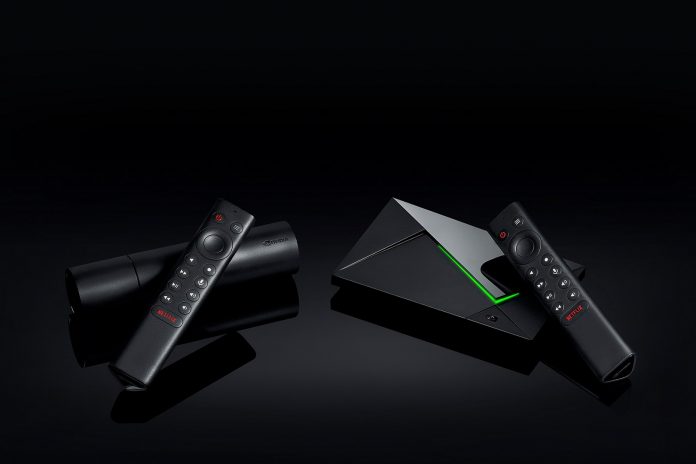 Nvidia’s Shield Android TV has been one of the best-regarded Android TV streaming players for a while now, so we’re especially happy to see the next generation of the device, now known simply as Shield TV (and Shield TV Pro), launching in Australia today.

Shield TV is designed to be the best streaming player, rather than the cheapest. Nvidia’s thrown their Tegra X1+ processor into the mix, ensuring Shield TV is snappy and responsive, and there’s an updated remote and the ability to bring along some of your PC games via streaming to boot.

The new Shield TV is actually two products – for $250 you’ll get a brand new Shield TV unit wth remote, while the Shield TV Pro at $350 is more like the original, with its sleek technical polygon-like design looking like something thats come from the future.

The most interesting part of the new Shield TV devices launching here is the major change in form factor from the original Shield to the new entry-level Shield TV device.

Shield TV is now a cylinder, with a power connector (& Ethernet port) at one end and a HDMI plug with Micro SD card slot at the other. This makes the new unit pretty nondescript and anonymous, and so it’s pretty adaptable in terms of placement (mine is behind my sound bar). The power cable is reasonably long too, so you’re free to place it where you’ll get the best Wifi reception. There’s no HDMI cable included, but even I seem to have 11 million spare HDMI cables around and they’re pretty much commodity items these days.

Internally, Shield TV is running the Terra X1+ outdoor with 2GB of RAM and 8GB of storage. Moving up, the Shield TV Pro packs a little more on the inside and has some USB ports for expansion on the outside. The form is much more familiar – it’s the little wedge-shaped unit that could, with its green lit highlights it’s designed to be more conspicuous than its little brother.

Both units allow you to stream games from your GeForce-powered PC, should your house be so equipped.

I’ve replaced my Telstra TV 2 with the Shield TV. It’s early days yet, but I’m already pleasantly surprised by the experience. I’m used to slow and plodding Android TV on underpowered devices and this has been a revelation in speed and responsiveness.

Nvidia’s new Shield remote is a pretty clever, cute little thing. It’s triangular shape allows it to fit in your hand pretty easily, and it’s got a directional pad, enter key and 11 buttons arranged in a narrow two-column layout.

There’s slight ridges on the Play/Pause and Google Assistant / voice input buttons to help you find the right button in the dark, although that might not be such a problem as the remote features subtle back lighting that illuminates the buttons when it’s moved. Other buttons on the face include a power button, a menu button that can do some custom things based on the app you’re running, fast forward & rewind buttons, Android back & home buttons, and volume up/down buttons that can be programmed to work over IR to control your TV or sound bar. The setup process for this is pretty simple, although it’s buried fairly deep in Android’s settings menu.

What about the Game Controller?

We haven’t talked about game controllers yet… Because there aren’t any included. The original Shield came wth a game controller in the box, but the new ones do not.

This is probably a wise choice for a new generation of hardware. Users upgrading would probably resent having to pay for an extra controller they might not want, and I suspect most customers going for the $250 Shield TV might not be playing that many games on their streaming player.

Still, it’s good to have the option. Should you want one, the controller is available to purchase separately and you can also bring Xbox, PS4 and other Android-compatible controllers along for the ride.

When we first started looking at Australian catch-up TV and subscription service offerings, the landscape was very different.

While it took our local broadcasters a long time to get on board with Chromecast and even longer to embrace Android TV as a platform, here in 2020 we’re looking at dedicated apps for all major broadcasters, and if there’s no dedicated app you can probably use the built-in Chromecast function to get content into your TV. All the major subscription services are spoken for, too – this stands in stark contrast to my longstanding platform of choice – Telstra TV – which hasn’t got a Disney+ app. I can get my Mandalorian (okay, and Frozen II) fix just fine on Shield TV.

Android TV allows installed apps to place rows of content on your home screen (sometimes promotional, sometimes functional based on your app usage – like a resume row to pick up where you left off). Not all apps support this, but a good deal do. If your don’t want a particular row, you can remove it.

Otherwise, Android TV has always been and remains a pretty basic no-frills interface that’s light on complications – most apps don’t really have much by way of background textures behind their UI, which contrasts it a bit with other platforms like Apple TV. Nvidia’s known for going light on the pre-installs, so you’re looking at a pretty standard Android TV device with some customisation during the setup process to install some apps and games.

The unit we’re reviewing didn’t offer apps from Australian broadcasters during setup, but Nvidia says retail units should offer an experience customised for Australian users. The apps weren’t far away in the Google Play store anyway.

The same can’t always be said of live TV – Shield TV lacks an antenna input, which is an interesting omission at the price point. The Pro model can use a USB tuner (and you’ll likely want to use a USB storage device), although that’s really not very elegant solution.

Many broadcasters have live streams in their apps, though not all -and Freeview FV doesn’t have an Android TV app yet. Besides, who wants to blow through their data cap simply to am avoid switching inputs? You’ll be switching back to your TV antenna for free to air broadcasts.

Nvidia doesn’t operate its own content store, so your Shield TV is pretty free to promote content from the apps you install. This is a stark contrast to my Telstra TV, which seems desperate for me to rent something – anything! – from the Telstra Box Office app.

Still, it does highlight a lack of universal search on Android TV or, rather, the fact that companies need to do more to integrate their video catalog with Google’s search services. Most don’t bother.

A lot of searches don’t show results that guide you to particular apps – you’ll just need to remember that Game of Thrones is on Foxtel, Bluey can be found in ABC iView and Married At First Sight is in 9Now (just kidding – you won’t care about that last one, surely!). By way of platform comparison, Telstra TV suffers for lack of voice input (addressed on newer hardware) but their search is way better at bringing up content from the apps available in its ecosystem.

Shield devices are sold at a number of outlets in Australia — Harvey Norman and Kogan are probably the best known name brand stores, and if you’re familiar with retailers from the PC parts world (speaking to Nvidia’s origins) you’ll also find them sold at Mwave, Scorptec, PCCaseGear, Umart, JW Computers, PLE Computers and Centrecom.

Note: Before this article was published the prices for the devices were given to us as $250/$350, but we’ve since been told that resellers are selling the device at higher prices ($290/$400) owing to market conditions and exchange rate fluctuations – this may continue to change.

You can find more information along with retailer, accessories and ordering at Nvidia’s Shield TV website.

Lack of tv antenna rules it out for me. What a strange decision!

Get rid of the Netflix button and I’ll buy one. Netflix sucks!

Does it automatically swap to 24Hz when you start playing a show in Netflix?

My old Mi box didn’t and when I swapped to Apple TV the difference was huge. But I miss play music and refuse to buy into Apple (device excepted).

Also , does the cheaper one have IR? Where is it located? (I use a Logitech universal and don’t want to go back to multiple remotes)

Shame the shield doesn’t have a USB. I just want a modern media player to play media files from my 3 external harddrives. I’m still using a Philips hd media player which has done very well for over 7 years old but starting to not be able to play some video files. Had considered a raspberry pi but wasnt sure if it would power the hard drives (they are now in a NAS). Any recommendations? I only have internet and thus wifi on my phone.

No mention of GeForce NOW not being available in Australia, a major feature of the device that isn’t mentioned anywhere before you purchase the device. Very disappointing, there should be a sticker on the packing stating this.

Telstra tv!!!…WHY!!!…a Vodafone tv box is better than Telstra tv. At least you saw the light and went for the NVIDIA , which by the way, is the best media streaming box on any platform. It can be used as a server, streamer and game console and that makes the most versatile streaming box. The only thing that could touch it is a Mac mini or a nuc.

I’ve actually found Telstra TV a pretty solid streaming box that does everything I want and has the apps I want (until recently, when Disney+ failed to appear). Roku is a pretty nice platform, and things just work.

I’m with you Jason, I have 3 Telstra TVs I originally purchased for Foxtel and they just work. I got the Telstra TV 2 for free when i signed up for a new contract and I can’t fault them. PS still love my shield console too👍

Can U get the new remote seperatly now in Australia?