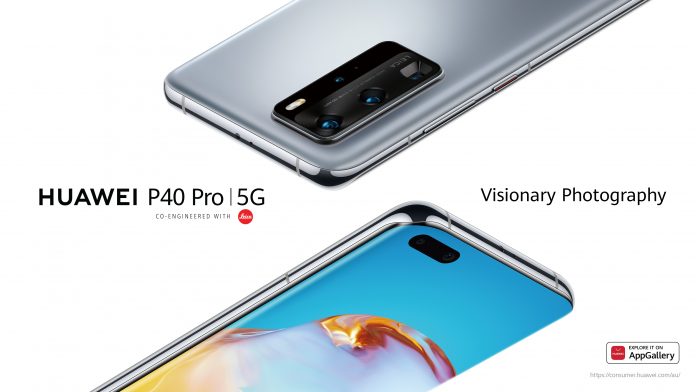 Huawei’s launched its much-anticipated new flagship P40 smartphone series. Two models of the new range (P40 and P40 Pro) will be hitting Australian shelves starting on April 16, but it looks like the highest spec P40 Pro+ model with its premium camera won’t. We’re going to stick with the phones that are coming here.

The P40 series is, unsurprisingly, the successor to last year’s well-received P30 and P30 Pro (indeed, most of this post was written on the P30 Pro). This year, the phones are only available for outright purchase and you’ll need to give careful consideration to whether they’re right for you, regardless of how amazing that camera is.

As is common with flagship phone launches, we’re looking at a premium phone – the P40 Pro – and a baby brother – the standard P40 – with slightly lower specs and of course, a more wallet-friendly price.

In the case of the P40 and P40 Pro, you’re mainly looking at a bigger screen, bigger battery, wireless charging and better camera.

Both phones run on Huawei’s Kirin 990 5G processor, and are packed with 8GB RAM and a very generous 256GB of onboard storage. They also support Huawei’s weirdo NM memory card format if you decide you need more space.

Huawei’s declared war on bezels, with the P40 Pro featuring a new curved “overflow”display that curves over the sides, top and bottom of the device. It eliminates bezels, but we’ll have to wait until we get the phone in-hand to see how it handles palm rejection as we one-hand the phone and reach across the phone’s fairly large surface. It’s a big one too, at 6.53-inches. The P40 display is a more straightforward affair without the curved edges, clocking in at 6.1-inches.

Both phones feature OLED displays, with a punch-hole design housing the devices’ front-facing camera (& a depth camera on the P40 Pro) at top-left, breaking from the last couple of generations’ top-centre camera alignment.

There’s two colours available on both models this year — Deep Sea Blue and Silver Frost, with the latter featuring a reflective finish that Huawei promises is just as eye-catching as last year’s Breathing Crystal on the P30. We’re also pretty up on the Blue, though. On the back of both phones, there’s a considerable camera bump – now apparently known as a camera “island”, holding the latest goodies cooked up by the continuing camera collaboration between Huawei & Leica. By now, flagship Huawei’s camera performance is known to be stellar, and we’re pretty sure this camera will do this tradition proud.

The camera is designed to capture incredible detail in its images by day and by night, and features full-sensor phase-detection autofocus so you should be able to quickly and reliably focus on any part of your image. It’s also backed up by Huawei’s AI smarts for stabilisation and features the return of the company’s periscopic telephoto lens that debuted on the P30 last year and offers great image quality while zooming. It should raise the bar Huawei has itself set several times over the last few years.

The P40 Pro features a big 50MP (f/1.9 with OIS) main camera featuring some of the largest pixels yet seen on a smartphone camera on a 1/1.28 inch sensor. It also brings back the RYYB sensor technology introduced on last year’s P30 Pro. It also places a 12MP (f/3.4 with OIS) RYYB sensor behind its periscope telephoto lens, claiming up to 50MP zoom and offering AI & OIS to help you keep a stable shot at that extreme zoom limit. Finally, a 40MP (f/1.8) ultra wide angle sensor should provide greater detail to wide angle shots and a depth sensing camera.

Huawei’s placing a lot of focus on video performance too, with 4K 60fps recording, super slow motion, timelapse, audio zoom and more. Huawei’s trademark low-light performance is now available in video flavour too, where you’ll be able to push it to ISO 51200.

The lower spec P40 has a similar configuration and shares the 50MP main sensor, but with lower specs on the other sensors (Ultra Wide Angle 16MP f/2.2 and Telephoto 8MP f/2.4 with OIS) and there’s no depth camera.

Huawei’s best-specced phone – the P40 Pro+ – features the company’s most ambitious camera yet. The SuperZoom Array features 3x optical zoom plus a 10x periscope telephoto lens that, combined, can provide a huge 30x hybrid zoom and up to 100x zoom if you don’t mind going completely digital. That phone isn’t coming to Australia, though.

There’s also some new AI enhancements on offer. Huawei has been evolving these features for a couple of years now and is adding a “Best Moment” feature to help you capture the perfect photo from recorded bursts for sports and help you to remove photobombs, glass reflections and more. Disappointingly, but out of Huawei’s control, while the phones do run Android (Huawei’s brand of Android is called EMUI) they will ship without Google Mobile Services – so you’ll be without some of the world’s most popular apps like Gmail, Google Maps and you won’t be able to access the Play Store. In their stead you’ll find Huawei’s rapidly-growing App Gallery, which may or may not be enough for you.

There’s a couple of new Huawei-specific apps on offer here, too: a streaming music service imaginatively called Huawei Music, and a … familiar-sounding … video chat app named MeeTime. With those apps kept exclusive to Huawei devices though, it doesn’t really seem likely that MeeTime will encourage users away from other more established services and apps.

Huawei is also big on its Windows PC connectivity suite, which allows you to connect your phone to your computer and make/take calls and transfer files across with ease. If you’re a Mac user though … 😬🤷‍♂️ Huawei is offering the P40 at $1,099 from the Huawei store in Chatswood Sydney, Mobileciti and Harvey Norman. The P40 Pro will go for $1,599 and will be sold at those stores as well as JB Hi-fi and Officeworks. Huawei is also offering a VIP service to help customers set up their device.

The phones will go on sale on April 16, with a pre-order bonus of a set of the company’s Freebuds 3 wireless headphones (worth $299) via online redemption for the P40 Pro if you get your order in before April 15.

anyone know why huawei decided not to release the phone to vodafone, optus or telstra

As the Huawei phone does not have Any Google apps Due to Uncle Donald Trumps black ban of Huawei.

I’m surprised these made it to brick and mortar stores in Australia. Why anyone would purchase these devices without Google Services I can’t work out. Another surprise is the price with Huawei pricing them up there knowing they’re lacking even basic third party app support that everyone in the western world is used to using everyday. I bet most of these will go back for a refund from those that buy them without realising they don’t support Google apps and the App Store. I think Huawei will really feel the pinch in 2020 and be overtaken by other vendors. Xiaomi… Read more »

Our early information had it as $1,499, but the final release said $1,599. We’ve updated but will seek clarification.

Cant say i`m a fan of the P phones , i have the P30 pro , i find the in display speaker to be just not good enough . if you are in a quiet room it may be passable , if there is any back ground noise , theres not enough volume imo , and trying to use it on speaker is just utterly useless imo . cameras quiet good , battery life also good , certainly has some good points , but also a few other niggles though with emui . Looking at the 40 i see some… Read more »