Recently Xiaomi released the Mi 10 and Mi 10 Pro in Europe and as with most Android phones in Europe they come with Google apps pre-installed. What surprised most is that the branding on the side of the box was different and possibly seen as distancing themselves from Huawei.

with easy access to the Google apps you use most

Many, including myself, saw this as Xiaomi having a crack at Huawei and their lack of Google apps but Xiaomi took to Weibo to say that Google require all OEMs that ship devices with Google apps to include this statement on their packaging. This copy is from the promotion requirements of the partners in the latest cooperation agreement, similar to the “power by android” displayed on the Android phone and the “intel inside” on the computer. 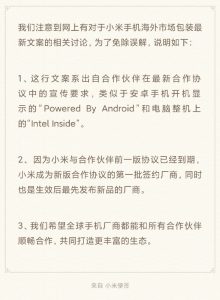 They later went on to clarify that the packaging is “consistent with Google’s long-standing branding guidelines, intended to help ensure customers are properly informed of the software on the device.”

Google’s guidelines have been in place for quite a while and the intent of the line Xiaomi have included on their packaging is to inform consumers that the device offers more Google apps than are typically pre-installed. That is, along with the usual Google GMS Core apps, it has other Google apps such as Google Pay, Google Podcasts, Google One, Google Contacts and Google Lens etc. The line is NOT required if just the standard GMS Core apps are all that are installed. The line is also a recommendation and not a requirement according to the super sleuths over at XDA Developers.

There is no hidden agenda by Google apparently and this requirement has been there for quote and thanks to XDA we know the reason for it. It is strange that this has not appeared before now but the fact that the line is a recommendation and not a requirement goes a long way to explain not seeing it before. It is entirely possible that this was Xiaomi having a crack at Huawei and pointing out why their phone is better than Huawei’s — after all why else would it all of a sudden appear now when the Google branding guidelines have not changed.

While the explanation by XDA matches Xiaomi’s second statement it does not sit with the first one. We suspect that someone at Google may have had a word in the ear of someone at Xiaomi as to the actual reason behind the line on the box and for them to correct their public comment on it.

Fear not Chicken Little, Google are not deliberately alienating Huawei and you can be sure that as soon as they are allowed to they will welcome the world’s second leading smartphone manufacturer back into the Google fold.