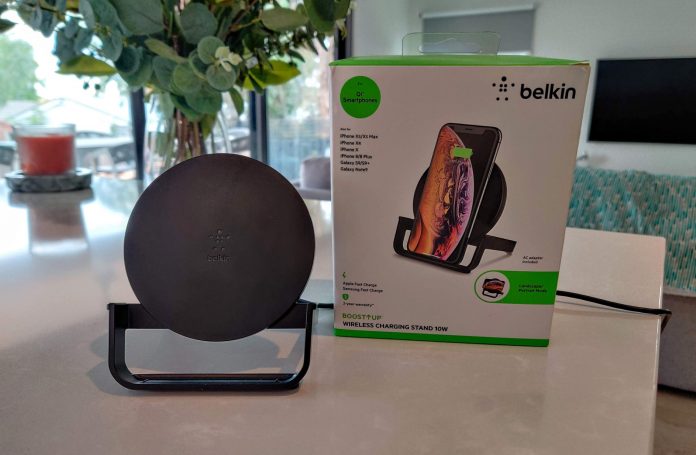 The Belkin BOOST↑UP Wireless Charging Stand looks to be very similar to the previous charging pad we reviewed except of course that this one is a stand. It looks awkward but functions extremely well.

Similar to the charging pad it has a single LED light to let you know the phone is positioned correctly and is charging. Now that sounds great but the problem here is that the light sits behind where the phone is and thus cannot be seen. You’ll need to rely on your phone having some form of indication to see if it is charging or not. The bottom of the stand has a rubber base to prevent it from slipping and sliding all over the desk , or wherever you choose to locate it. There is nothing on the front of the charger like the pad has to keep it from slipping, but then it has the cradle / guide and a rubber strip on that to help you place the phone in the correct position. I can’t see how you could have it slide off or not be positioned correctly on the charger. Stick your phone in the middle of the cradle and it will charge.

In case you missed it, the battery on the Galaxy S20 Ultra is woeful at best, especially when using the full 120Hz display refresh rate. As such the BOOST↑UP Wireless charger came in very handy. I was able to leave it sitting on it at work while not in use and it would charge. I could easily pick it up when required and use it without having to unplug and then replug a wired charging solution before and after using it.

The BOOST↑UP Wireless charger was easily able to charge the phone and keep it charged during the day even while using it quite a bit and running the display at the higher refresh rate. The ability to keep up with the power demand of a device being used can be credited to the 10W charging capacity of the charger — a massive advantage over the cheaper 5W chargers.

The advantage of a stand over a charging pad is that you can see the phone and interact with it while it is charging. The BOOST↑UP Wireless charging stand was especially good for this because the charging guide only goes up a couple of centimetres and thus if I wanted to watch something in landscape — for example, YouTube — I could pop the phone onto the top of the guide and watch media in landscape while at the same time have the phone charging. This way the battery does not run down while you are using it — a perfect solution for a poor battery life. The Belkin BOOST↑UP Wireless Charging Stand is a prefect charger for any phone you may have. The guide helps you to place the phone in the correct location while at the same time interacting with it — in landscape or portrait mode. The fact that it can charge a device up to 10W (if it is supported) is a bonus and allows your high end device to remain topped up throughout the day.

The Belkin BOOST↑UP Wireless Charging Stand can be purchased from Belkin.com/au and leading retailers including JB Hi-Fi for $79.95 in black and white colours.

Did this charger use USB type C?