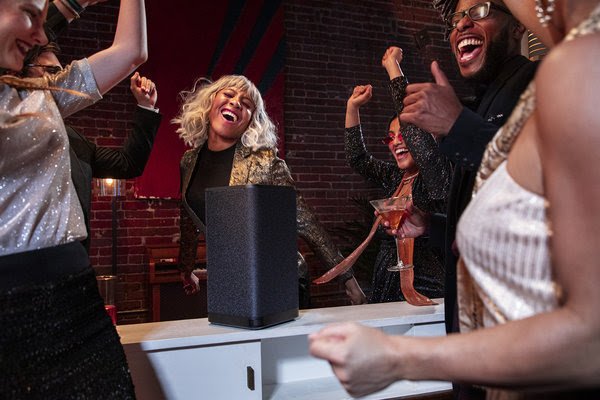 In early March 2020 UE’s new huge Hyperboom portable bluetooth party speaker capable of 3x the loudness and more than 6x the bass of UE Megaboom 3 started being sold in Australia.

Unfortunately for UE their timing couldn’t have been worse as that was the same time when Coronavirus cases in Australia passed 100 and caused governments to shutdown many workplaces, ban travel and social gatherings as well as restricting people’s movements.

It’s hard to properly review a party speaker when you’re not allowed to have parties, your birthday and other social events have been postponed indefinitely and the building where you live has posters displayed everywhere asking people to be quiet.

Bearing that in mind I have reviewed the Hyperboom in 4 different ways using it’s 4 different inputs:

In the box you’ll find the Hyperboom speaker which weighs in at 5.9kg and dimensions of Height 364 mm x Depth 190 mm x Width 190 mm. Also inside is the laptop computer type power supply rated at 19V @ 4.74amp.

As you can see on top of the speaker you’ll find a power button, +- volume buttons and a way to switch between the 4 input types (Bluetooth 1, Bluetooth 2, Aux 3.5mm and Optical).

There’s also a small microphone on top of the speaker which does the important job of sensing where you’ve placed the Hyperboom in a space and optimising the equalizer accordingly. I found it sounded best when placed about 30cm from a wall

On the back spine of the speaker there’s a carry strap and weatherproof flap covering the inputs and power socket.

The claimed up to 24 hours of battery life is only at low volume. If set to maximum volume UE promises 3 hours of audio playback.

Bear in mind that maximum volume is 100 decibels and Safe Work Australia says any prolonged exposure to over 85 decibels is harmful so if you listen to the speaker at a high but not maximum level it will last much more than 3 hours.

The Hyperboom uses Bluetooth 4.2 – 5.0, has a paired device memory of up to 8 paired devices and a mobile range of music play up to 45 m away.

Tested with optical in from TV – the Hyperboom is not as good as a dedicated soundbar with subwoofer but certainly a lot better than the speakers in most TV’s or a basic soundbar without subwoofer.

That’s because the Hyperboom is capable of the frequency range 45 Hz – 20 KHz so it’s missing the 20Hz – 45Hz range where a subwoofer would be able to output true low notes you get in TV shows and movies.

That’s not to say the Hyperboom lacks bass because if you play that kind of music it reverberates around the room.

If you’re going to use the Hyperboom as a TV speaker it’s best placed below the front of the TV, where the TV is on a stand or wall mounted. If the Hyerboom is placed on either side of the TV one of your ears will get more sound than the other which feels unbalanced.

Tested with line in using Alexa Dot with Clock speaker – works well listening to my mix of music from the 60’s to now on Amazon Music, the eclectic sounds of 3RRR Community Radio during weekends and ABC Local Radio during weekday breakfasts.

Tested paired with a Nest Home Mini, the Bluetooth connection was sometimes clear but other times scratchy audio quality. I’m not sure whether the problem is the Mini or the Hyperboom or that I live in an apartment and there are so many other Bluetooth devices being used by my neighbours.

No built-in Chromecast, Alexa or WiFi direct playing functionality in the speaker means you can’t cast to it directly which is disappointing. So if you connect via Bluetooth from your phone if you get called it will interrupt whatever you’re listening to.

If you’re going to use multiple inputs, especially if you use all 4 you’ll have to either walk to the speaker and press the appropriate input button or use the UE Boom app. It’s a shame that the speaker can’t automatically sense which input is suddenly sending it audio and switch to it.

Should you buy the UE Hyperboom speaker?

You’re unlikely to be able to use it at a big social event with family and friends anytime in the next few months.

However the versatility of it’s many inputs means the Hyperboom can get plenty of use (at a socially acceptable volume) while you’re stuck working from home in lock down as a jack of all trades speaker capable of playing audio very well from your phones, tablets, TV and as an audio output for your Alexa/Google smart devices.

The clever designers at UE have made the Hyperboom black and quite serious looking compared to any other bluetooth party speaker so you’ll probably find your significant other doesn’t mind it being being prominently displayed in your living room. Which wouldn’t be the case if it was bright green or yellow and uglier.

Once the Coronavirus lockdown lifts and the police won’t arrest you for playing music in the park or at a beach the Hyperboom is the biggest and best bluetooth speaker on the market and will be able to show it’s full ability off indoors and outdoors at a more fun volume level.

The UE Hyperboom is available from major electronics retailers instore and online for $599.