WhatsApp is one of the biggest messaging platforms on the planet, its cross platform and the odds are you know a lot of users. As an encrypted messaging platform, WhatsApp offers privacy to your messaging but that security can also lead to misuse. As we move through the COVID-19 pandemic, that misuse is coming in the form of rapid spreading misinformation.

A simple example of this is something that was circulating on Facebook and I received multiple times on Whatsapp around a week ago. 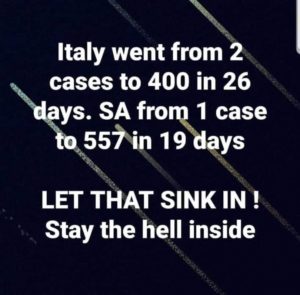 This was 10 days ago and on the surface, pretty innocent. The fact is that South Australia on the 13th of April as of 3pm had only 431 cases reported. While this is a pretty innocent case, there are plenty more examples including false information on the virus and prevention.

There are ways to recognise messages that have been forwarded multiple times and didn’t come from one of your contacts. WhatsApp has previously introduced forwarding limits to prevent users forwarding messages to all their contacts and now they’re taking that further.

It’s important to note that this forwarding limit only applies to messages that you receive with the double arrows mentioned. Standard messages including videos, images and funny memes can still be forwarded to 5 contacts.

What else do you believe WhatsApp can do as a major messaging platform to slow the spread of misinformation?