realme are pushing into the Australian market in a big way in recent months bringing with them their philosophy of offering fun looking devices that place an emphasis of function while priced at an extremely affordable price.

We recently reviewed the $269 relame C3 and were impressed with the value for money that it offered and when they released the nearly twice the price realme 6 it seemed like a good idea to check it out — and boy are we glad we did. 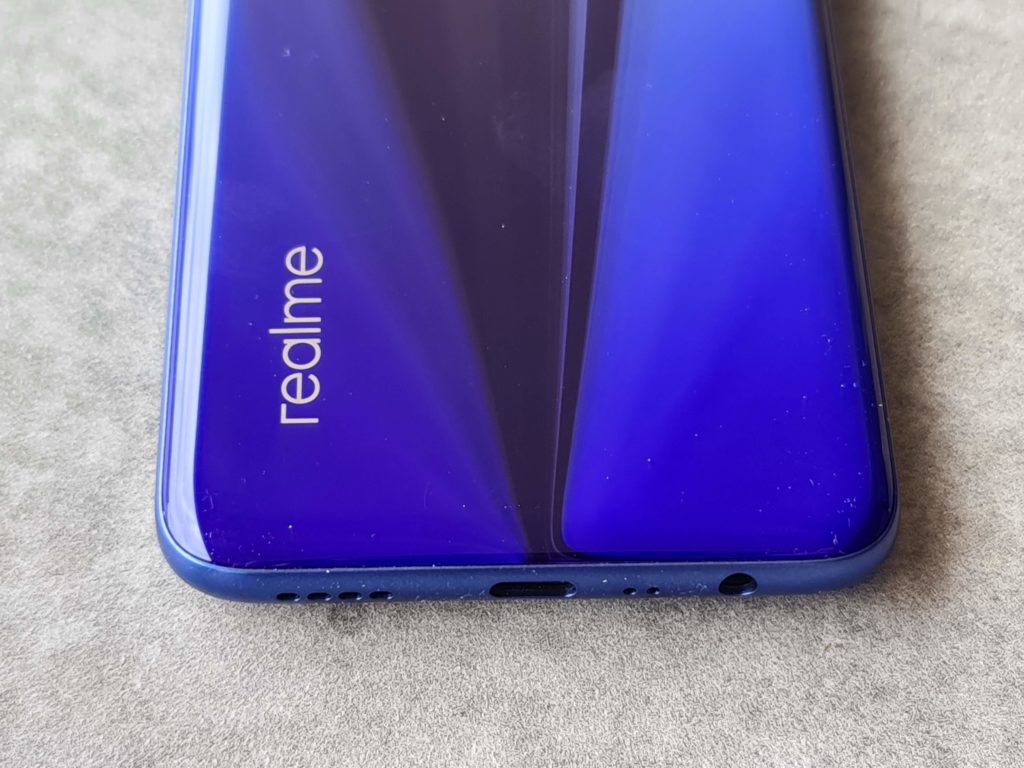 What a great looking phone

When looking at a realme device the design is the most important feature as they put a large amount of effort into making the device as appealing to youths as possible. The realme 6 is no exception.

I was impressed with the design of the C3 with the plastic backing offering a very attractive colouring. The realme 6 is more of the same with the gradient colour of the rear, along with the streaking colour appearance offering an extremely attractive package.

Once again the rear of the device is a polycarbonate material (plastic) which really does not concern me — it means the device isn’t as heavy as a premium glass but also means that it most likely isn’t as slippery.

The realme 6 sits nicely in the hand with the power button that doubles as the fingerprint sensor each to reach with either hand.

For the realme 6 the hardware is not important at all — mostly because it is average (at best) hardware which is belied by how well it functions on a day to day basis.

The display is a 6.5-inch 1080P display that supports 90Hz refresh rate. Sure it may not be a 2K resolution display but remember even the ultra-premium Samsung S20 devices cannot operate at a resolution higher than 1080P when running at 120Hz (or 96Hz). The display is an LCD and the difference between that and an AMOLED display is evident in the vibrancy of the colours on the display.

Although they are muted to some degree the display is far from a disgrace and to be honest can only really be noticed when going straight from a premium AMOLED display to the realme 6 or vice versa.

The device is powered by a Mediatek MT6785 chipset supported by 8GB of RAM and 128GB of storage (and support for a microSD card). Mediatek may not make the best chipsets around but they are affordable chipsets and are often used in mid-range devices for that reason. The performance of the realme 6 is such that on an everyday basis it never misses a beat. By itself the speed and smoothness of the user interface and the apps is excellent — especially considering it is priced at just $469.

The fingerprint sensor I was extremely sceptical about with it sitting within the power button on the side of the device. I was pleasantly surprised with its accuracy and speed although you do have to wonder about its security. I found it great being able to unlock it with either hand, index finger or thumb, just simply while picking up the device. Realme includes some other great additions including a headphone jack, an FM radio, support for Bluetooth 5.0 and a USB-C port for charging.

The battery is a decent 4,300mAh and supports 30W fast charging — and the fast charger is included in the box, free of charge. The charger was able to charge the device from 2% to 62% in just 37 minutes, better than some premium devices and the chargers in their boxes.

The 4,300mAh battery provides for a long battery life. In my memory I cannot remember using a smartphone with a battery life this good. I am used to charging the device overnight but a couple of times I deliberately did not charge it and it ended up lasting over 40 hours. For a heavy user like me that is unheard of. With over 10 hours of screen on time and the display at a brightness of over 60% that is phenomenal.

The Australian version of the realme 6 supports dual SIM AND at the same time a microSD card thanks to its large SIM/microSD card tray.

When I was setting up the realme 6 it was frustrating as all hell. Just like OPPO you set it up using OK Google setup my device and after you’ve through all the usual rigmarole for setting up fingerprint etc it then asks you yet again to start setup — a second time, even though you’ve already done this. This is obviously a hangover from when realme used OPPO’s ColorOS.

Since we’ve had the review device it has received a couple of updates and just as well. There is a menu item in settings that is for “Fingerprint, face & password”. When we first got the device there was also a fingerprint setup within “Privacy” which has since been removed. It may not sound bad having it in two areas but one of them did nothing. Fingerprints learned within it were not recognised by the system. As I said though, fixed now.

Another issue we had was that the OS was unable to cope with more than one work email or profile. We have a couple each for Ausdroid plus I have one for my University work. The realme 6 would only let you use a single one. Choose which you want most. Realme tell us that this is a known bug and a fix will be rolled out soon which I actually believe given they fixed the fingerprint issue mentioned above.

Aside from these couple issues and general setup nuances introduced by realme (and OPPO) the phone is not bad to use on a daily basis. The phone functioned as expected — there were the occasional issues that we had with OPPO phones in that LastPass would often need for the phone to be restarted for it to work and it kept asking me for permission to have Twitter/Plume run in the background every single time I opened it.

Everyday use though was just fine. You don’t notice many of the idiosyncrasies associated with realme UI (and ColorOS — they aren’t that different at this stage). Apps opened fine, there were no silly notifications, nothing out of the ordinary.

The fine worked great for media consumption apps such as YouTube, Netflix etc and the image was decent, albeit an LCD quality rather than a high end AMOLED display.

Android Auto wasn’t a perfect experience. For some reason both OPPO and realme phones always ask you how to connect when you plug the phone into the Android Auto head unit. Ignore that and it then worked fine, although the connection dropped out more often than usual.

If you also have the stand-alone Android Auto installed on your phone (and you need to if you are going to change any settings or edit the app drawer for Android Auto) the phone will NOT work with Android Auto and will instead continue to crash. OPPO phones don’t play well with Android Auto either — forget about trying wireless Android Auto on either. Hopefully they can sort out this issue and implement a fix going forwards. So what are the hardware specs anyway: The main lens uses pixel binning to create a 16MP photo while maximising the amount of light that is used in the image. The resultant image is hopefully brighter while at the same time maintaining the sharpness.

The camera is the same as all over average mid-range cameras (aside from the Pixel 3a and maybe a Samsung A series) — it’s average. Average is not bad these days but is actually good. The images are as good as a premium smartphone from a couple of years ago.

Outside the images were quite good but every camera in a smartphone should be able to take a decent photo in 2020. This phone is the bottom end of the mid-range and the camera is as such. The resolution at times suffered from distance but the images looked realistic with the resultant image not over-sharpened by software nor the colours distorted in an attempt to make them look more “vibrant”.

Night mode was as good as the last time I tried night mode on a realme smartphone — average. Mid-range phones lack the computing prowess that the ultra-premium smartphones have when it comes to a night mode. Same goes for this phone. The difference between a Galaxy S20 Ultra and this with Night Mode was literally night and day — but then one is three to four times the price of the other. After you get past the frustrating setup procedure and learn to live with a couple of small idiosyncrasies that don’t get in the way *that* much this phone can be a decent experience.

For $469 you get a phone that runs surprisingly smoothly with a 90Hz display that has the usual LCD-muted colours that are still certainly good enough when by itself. These things are only noticed when you place it side by side with an AMOLED display.

As a day to day phone it served me well with a very responsive fingerprint reader that was easy to access from any hand and a face unlock one of the quickest in the business. Add in a battery life the equal of which I cannot remember seeing and you have a great phone, especially considering the very low price.

Going forwards I do hope that realme continues to refine their software experience, moving more away from the ColorOS experience and more towards their other sister-company OnePlus’ OxygenOS, the best in the business.

My biggest concern about companies like OPPO, realme, Xiaomi are updates. Whilst it would be nice to have the latest version of Android all the time, I am not too fussed about that. But what I am fussed about are security updates. It seems like all a majority of these Chinese companies want to do are sell new products, increase their market share so they have something to boast about and actually don’t give two hoots about consumers who already have their product. Agreed this article is not about OPPO but I would like to raise a point, if I… Read more »

Android updates, while they’ve improved in recent times, are still an absolute mess. Every OEM seems to do their own thing, with very little information provided to the consumer at point of researching the phone or buying the phone. It’s one area the iPhone and iOS absolutely excels in.

Almost there kinda device it seems. Scott, would you mind labeling the mediateks with their coded number that most people might know a bit better (Helio G90 in this case).