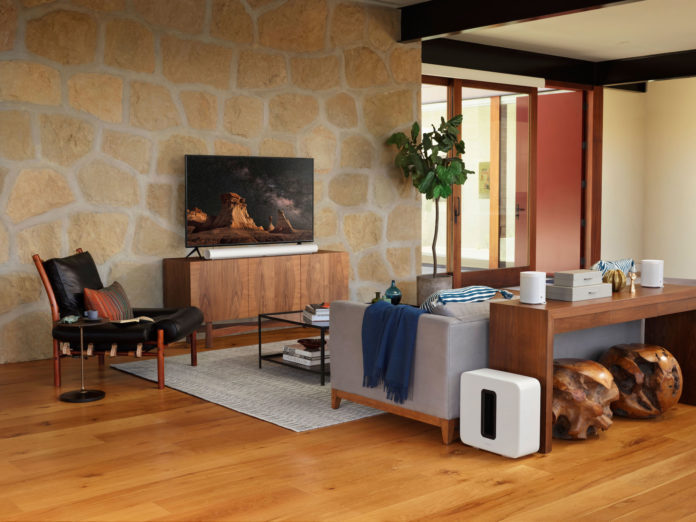 Sonos hardware tends to have a pretty long service life, and the company has just announced a much-needed update to one of its oldest products, along with an updated 3rd generation Sub and a new refresh to its popular Five speaker.

The new hardware will be available on June 10, with pre-orders starting today at sonos.com.

The company’s new premium soundbar is called Arc, a reference to the outward arc of its profile design (but, handily, also the port you’re meant to plug it into) thats intended to blend naturally and unobtrusively into your home entertainment environment. Arc is a much-needed update to the old Playbar, ditching the old-style fabric finish for a plastic grille more in line with Sonos’ current hardware design ethos.

It takes some of the learnings from its popular Beam soundbar like speech enhancement and night sound along with Google and Amazon voice assistants, bringing them to the premium end of the market.

Arc brings crisp, clear sound in three dimensions with support for Dolby Atmos, with eleven drivers firing sound in all directions. It’s a wider sound stage than the Playbar, adding far left and right and upward-firing speakers to the mix. The addition of Dolby Atmos is canny, with increasing support for the standard in the catalog of many streaming services. Like many soundbars, a wall mount is available – otherwise, you can place Arc on a cabinet in front of your TV. It connects to your TV using HDMI ARC or eARC (supported on most TVs), which will help simplify the setup experience.

If you’ve got more Sonos speakers, you can use them as rear speakers to amp up your home theater experience. Arc of course also functions as a normal Sonos speaker so you can use it as a part of your Sonos system when the TV is off. Sonos’ 3rd generation Sub doesn’t change much – theres more memory and more processing power and new wireless connectivity hardware on the inside, although you shouldn’t notice that – but it brings the hardware design and features up to par with other  devices in the range, with an easy pair button for consistency. It doesn’t change the price, though.

Sub can be placed around your room and is designed to provide bass, and only bass – it’s got force-cancelling drivers around the centre cavity that eliminate shake and rattle while it’s doing its thing.

Arc will work seamlessly with Sub, letting Sub take on the lower frequencies when paired up, and adjusting its output towards more mid- and high-range frequencies.

The new Sub is also available in black or white on June 10, with the same price as before of $999. Sonos is also updating Five, one of its most popular speakers. Five is an update to Play:5, and it packs more oomph into its sound output than the popular One speakers you see on a lot of shelves. Like the Sub, there’s updated internals with more memory and processing power and new wireless connection hardware.

As before, Five can lie flat or stand on end according to your needs. This time out, it’s available in Black or White, and there’s no mixing and matching of those colours.

Five will also available on June 10, with the same price as its predecessor – $$749. All of the new Sonos hardware we’re covering here will run on the company’s new Sonos S2 software system, launching just a couple of days prior on June 8.

Sonos caught a lot of heat from the community earlier this year over hardware obsolescence, and is addressing the concerns by creating a new software ecosystem – named S2 – to run its more modern hardware. A lot of Sonos hardware will be able to run under S2 (even including my fairly old classic Play:1 speakers), but some devices will have to remain with its legacy system, to be rechristened S1.

Starting June 8, your Sonos software should prompt you to make the move to S2.