Home Smart Home and Wearables Around the Home Amazon launches eero mesh Wi-Fi in Australia, no eero pro model or... 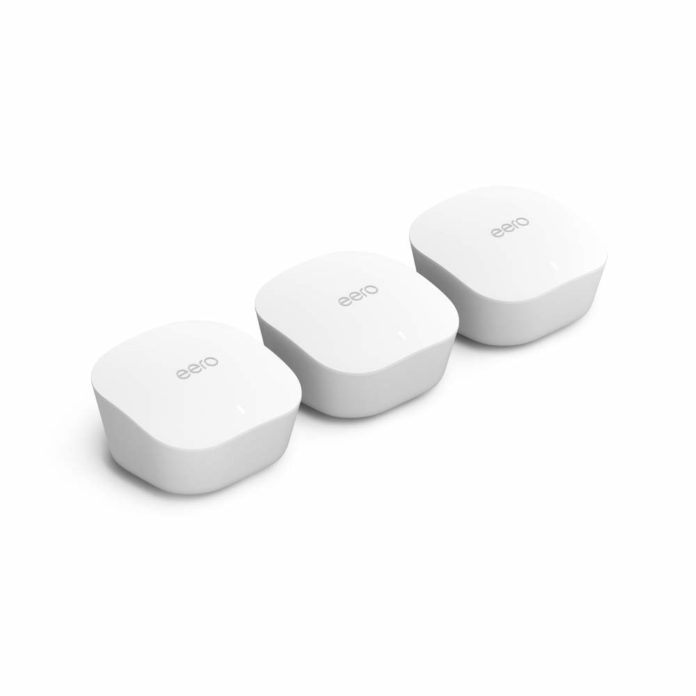 Amazon has launched eero mesh Wi-Fi in Australia. Readers who listen to the US podcast This Week in Tech may have heard about eero already: it was actually the first company to sell a mesh Wi-Fi product in early 2016 and is well known for being really easy to setup.

While initially an independent company, eero was recently acquired by Amazon. eero though advise that:

“Customer trust is our number one priority. We collect minimal network diagnostic information that is used only to improve the performance, stability, and reliability of our products and services, and to provide world-class customer support.

eero’s network security is constantly working in the background to keep your system safe and secure. Traditional routers require you to proactively search for, download, and install security updates. With eero, automatic software updates provide the latest security patches, bug fixes, and feature upgrades for your eero system without you lifting a finger”.

The eero mesh Wi-Fi system claims to offer simple, reliable Wi-Fi for streaming, gaming, and working from home. eero is a mesh Wi-Fi system that replaces your existing Wi-Fi router and extends Wi-Fi coverage seamlessly throughout your home.

eero now supports Apple HomeKit for those who are entrenched in that ecosystem. Customers can add their eero devices to the Apple HomeKit app to bring even more protection to their HomeKit accessories.

eero’s add-on subscription digital security services, eero Secure and eero Secure+ are not available at launch in Australia and Amazon advises they have no information about whether these add-on services will be made available in Australia in the future.

eero Secure is not needed to use an eero router, however without it the eero administrator interface lacks parental controls, ad blocking, threat scans and content filters so it is disappointing to not see it available here at release.

On the plus side the main node of the eero 3-pack launched in Australia is capable of connecting to your NBN modem or router directly via ethernet cable and has a LAN port spare to plug into a LAN wall socket. So if your home/office has ethernet cables connecting all the major rooms the other 2 eero nodes also have 2 LAN ports, one of which can connect to the wall directly to the main eero node at full speed with no signal loss.

The eero mesh Wi-Fi system is available for pre-order on amazon.com.au for $199 for the one-pack, and $429 for a three-pack. The devices will ship to customers from June 24.