Home Smart Home and Wearables Around the Home Australian Review: Facebook Portal TV is the best way to video call... For $229 the Facebook Portal TV enables you to seamlessly make Facebook Messenger/Whatsapp video calls and enable “telepresence” with your family and friends in a way that used to cost many many multiples of that price.

After I used the Portal TV for the first time I was immediately reminded of a story I wrote for iTNews 9 years ago where I visited the Internode Sydney office to try out their Cisco telepresence room to make video calls and converse with the Internode Adelaide staff on a big TV screen (as shown below). The people you’re calling using Portal TV can answer the video call on their phone or tablet, they don’t also need to also have Portal TV. However clearly the best telepresence experience at both ends of the call is enabled by both of you having a Portal TV connected to a big screen TV.

As you can see inside the box you get the Portal TV, power cord and instruction paperwork.

To use the Portal TV plug it into power and use your own HDMI cable (not supplied).

After auto pairing with the remote it looks for your local WiFi, it use 2.4Ghz or 5Ghz.

Setup encourages you to install Portal TV latched onto top of TV or below it and discourages placing it on a soundbar.

I placed mine on my soundbar anyway because I didn’t like the idea of having a webcam on my TV.

After my first video call I placed the Portal TV on top of my TV (it has a foldout part so it sits snugly on top) as the manual suggested. Otherwise having it close to a soundbar meant lots of horrible audio feedback during a video call. 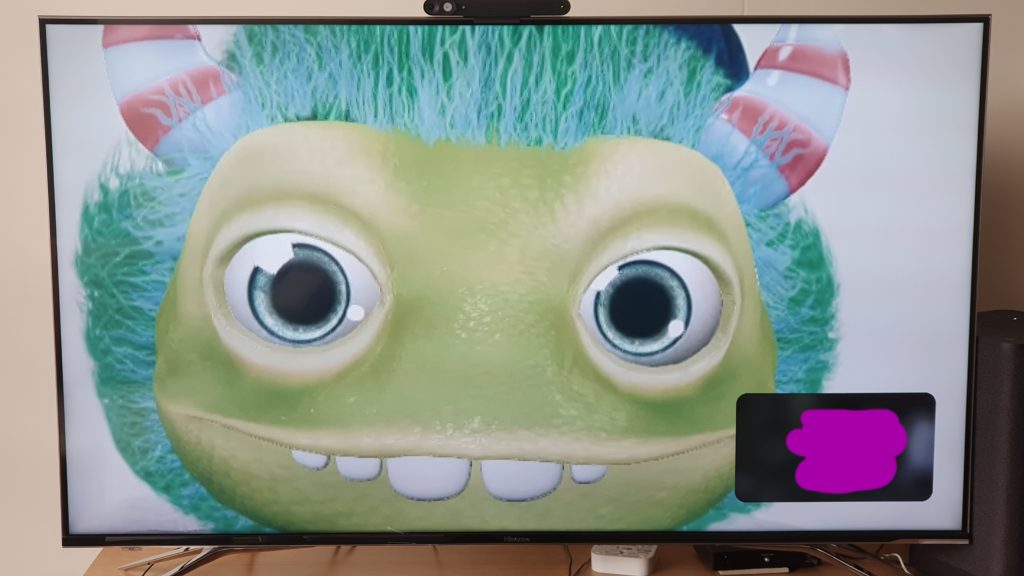 Downloading updates for the Portal TV (if needed) can take a while, it took me 15 minutes on a 100mbit FTTP connection. In the meanwhile you can see a tour of the main features. Then it prompts you to restart after which it downloads an update for the remote. I’ve never seen a remote get a software update before.

After agreeing to the terms of service (not that you have any choice but to say Yes) you have to give your Portal TV a name and connect to your Facebook account. After connecting you’re prompted to set your 5 favourite Facebook contacts. Firstly I have to say I was really impressed at how quickly the camera was able to track me moving side to side and up/down. The wide angle smart camera auto pan and zoom feature also works very well to increase the viewing area as family members move in and out of view in front of it. Facebook knows some people will have privacy worries about a webcam and mic in their living room so it shows how to disable these easily.

You can turn your Portal TV into a picture frame when you aren’t in a call, in which case it will display photos you’ve posted to Facebook with a public setting. You can also use the Portal app on your phone to add photos from your phone and create shared albums.

You can optionally link your Alexa account to the Portal TV. Note though that 3rd party devices with Alexa built-in always have less functionality than a Alexa device made by Amazon. Also if you have the mic and camera switches physically turned off when the Portal TV isn’t in use, you obviously can’t start the device up by voice anyway.

If you want to you can also connect the Portal TV to your WhatsApp account, which makes sense if you have contacts on Whatsapp who you’re not connected to on Facebook. Interestingly Facebook then displays information saying WhatsApp information is not sent to Facebook and is stored separately on the device.

You can add logins for up to 4 more people to the Portal TV. Unfortunately you can’t set yourself as Administrator, the other users will be able to change device settings but can’t remove you.

The built-in 3rd party applications available in Australia (Deezer, Spotify, Neverthink, Red Bull TV) are disappointing compared to the extra apps available in the USA which include Amazon Prime Video and iHeartRadio.

When you do a video call it can be with up to 8 people. You can either have each person take up a part of the screen or make one person bigger and have everyone else in a thumbnail down the left hand side.

Regarding the visual augmented reality (AR) effects that change what your face looks like, some of them also change your voice. I tried calling some young members of the family and they were amused intially by seeing me as an Easter Bunny but they got bored of the different effects relatively quickly.

You can also do AR storytime sessions with a limited number of builtin stories. When you login to WhatsApp on the Portal, annoyingly it means you have a permanent notification on your phone saying “WhatsApp on Portal – WhatsApp is logged on a Portal device”.

Also if you use WhatsApp web on another device eg a laptop, then you get logged out on the Portal so twice I turned the Portal TV on and had to reconnect with Whatsapp again.

The main question you have to ask yourself is whether the Portal TV is worth buying for $229 direct from Facebook when you could just use your phone, tablet or smart display to make a video call to family and friends instead.

The “new normal” society changes caused by COVID-19 mean that a lot of people who live in a different city, state or country to their family and friends won’t be able to fly over and visit them for a long time.

Big screen video calls mean you can still keep in touch and lessen that feeling of distance. I thought that the loaned Portal TV we have used for the last few weeks enabled a much better quality video experience than a call on one of our phones or tablets.

This is because a video call viewed on a decent sized TV (55 inch in our case) makes the people you’re calling look much closer to life size rather than postage stamp size on a small display.

That makes the Portal TV buying proposition a lot more attractive so I think it’s a great way to keep in touch.

It’s actually a real shame that the only place you can buy Portal TV is from the Facebook website because that means hardly anyone will ever find out about it and buy one.

It took me ages to work out from the article that this Portal TV doesn’t actually come as part of a TV – it’s just a proprietary webcam, yes? Also – I’ve used some chunky telepresence setups in Vic government buildings – they’re characterised by a multi-person viewer at both ends that (sometimes) zooms on the person talking – is this device that, or is it just a webcam that seems telepresencey because it’s been plugged into a big wide screen (not included)?

It’s very much the latter case in what you describe.

And yes, like you, it took a bit of work to figure out what was actually included in this.

It’s not just a standard webcam, it’s wide angle, recognises people and zooms in/out to fit more/less people in as they move in and out of shot

Cool, thanks Neerav (sorry my original comment was a bit grumpy)

no worries and if you find any affordable webcam telepresence type solution for home users please let me know!

Privacy concerns aside, you can do this with a phone tripod and a Chromecast.

The idea of an STB dedicated to video chat on a single anti-social nyetwork needs to die in a god-damned fire, yesterday. The problem is not that it’s an STB dedicated to video chat. It’s that it’s yet another STB tied to a single anti-social nyetwork walled garden. Imagine needing to connect separate STBs to your TV just to chat on fakebook/Whatscrapp, Hangouts/Duo, Skype, Zoom, Twitter, FaceTime, and Discord. That short list would mean 7 separate devices you’d have to plug into your TV, and find space for, sort out with the cabling and power for, and make sure you… Read more »

Good write up and review Neerav. It looks like it could be useful for a lot of people but putting a Facebook camera in my house is he last thing I would ever do. I don’t even have a FB account anymore due to privacy concerns, Nah I’m good thanks. Like Berto said, I’ll wait for the privacy breach to pop up in the not too distant future.