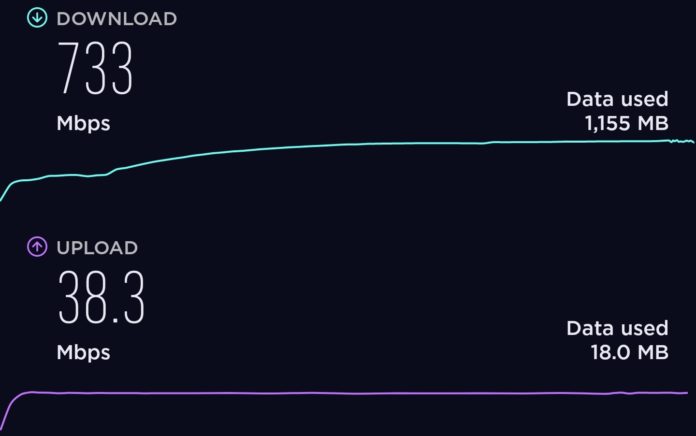 Whether you’re thinking of signing up for an NBN Gigabit 1000/50Mbps or 250/25Mbps plan or have already signed up you should read this advice about how to fix the things stopping you achieving full NBN Speed.

The founder of Launtel Damian Ivereigh has publicly commented on Whirlpool forums that one of the reasons why the big 4 NBN providers won’t rush into offering 250/25 and 1000/50 plans is because:

“Getting higher than 100Mb is hard with consumer grade gear and only recently has the newer stuff has started to support it. I can’t tell you the number of people who plug a Technicolor or Sagemcom router (from another RSP) into one of our 250/100 connections and wonder why it only does 100/100 :-)”

Regarding NBN Gigabit plans he commented:

“Your UNI-Dx light needs to be orange, not green and you need to use a new cat6 or cat5e ethernet cable” … also “handling QoS is a very sophisticated job and a feature really only present on business grade routers. So the question you probably need to ask is how much to you want this speed? If you do want it you should probably consider shelling out on a high end router – probably $600 at least”.

“The new 1GB plan is a best effort service and peak evening speeds will vary based on network demand at the time. We think that the plan should achieve off-peak speeds of up to 80-90%, depending on the technology type”.

“For the moment, we will be advising customers our peak evening speeds for our 250Mbps plans as a baseline until we have collated enough data from our own network testing”.

He also strongly recommended that the Google Nest WiFi needs to be paired with the Aussie Broadband Gigabit plan as more basic routers may not cope.

A spokesperson for Aussie Broadband acknowledged that other routers are available which are Gigabit capable and their tech support will do their best to support other BYO routers that support Gigabit speeds.

Advising a customer on Whirlpool forums Britt said that shaping (QOS) by the customer is often needed to achieve better upload speeds on higher than 100Mpbs NBN plans :

“I found the outbound shaping made a big difference … nbn use 4ms policing which is super short. I have mine set for about 90 Mbits on a 250/100 service and that works a treat. Without the shaper l only get 60 Mbits upload”.

“Try checking how you do any shaping on the upload. On our end it is policed, so if you send to much the traffic will be slower. if you can shape it to 400M (or 390M) see how that goes”.

Our finding s led us to the following recommendations: make sure your network cables aren’t really old CAT5 spec or slower. You should be using good quality CAT5e or Cat6 network cables.

With laptops and desktops you’ll get the fastest speed hard wired into a gigabit capable router. Beware that if your computer has a cheap network card or poor performing one built-in to the motherboard it may struggle to download even close to a Gigabit.

Laptop USB ethernet adaptors are unlikely to reach a full gigabit after allowing for USB overheads and chipset issues. In our testing USB-3 adaptors unsurprisingly beat the performance of USB-2 adaptors by about 200Mbps!

If you have WiFi 6 capable devices like a Samsung S10 or S20 series phone or a high spec new WiFi 6 laptop you need a WiFi 6 source to be able to make the most of a 1000Mpbs NBN connection wirelessly.

As you can see using a Samsung Galaxy S10 5G phone connected to a Netgear Nighthawk RAX80 AX8 8-Stream AX6000 WiFi router we could achieve close to the realistic top WiFi speed on an Aussie Broadband 1000/50 connection.

Initially we managed roughly 450-500 on Ookla speedtest but then turned on QOS in the Netgear advanced settings max 800 down, max 40 up and this consistently increased the top download transfer speed achieved.

Note that QOS/shaping is not available as an option on many consumer routers and even if it is the router CPU will often not be able to handle shaping a 250 or 1000Mpbs connection to maximise your speed consistently and reliably.

If your router is a cheap one a previous ISP gave you for “free” or less than $100, you almost certainly need to replace it. According to Speedtest.net not every consumer-grade router can support gigabit speeds over the ports in the back. Sometimes the ports support gigabit but the router’s CPU can’t keep up. In general, x86 processors are fastest, followed by ARM and then MIPS.

You still need to check this even if your router was provided by your ISP. Typically you’ll find that recently-released and the more expensive consumer grade routers are up to the task. Ausdroid asked several of the big router manufacturers to advise which of their models were Gigabit capable.

Some like Netgear weren’t able to respond in time for this article even though they have a several Gigabit capable models. ASUS provided us with great depth and technical detail with their answer.

We note that Ubiquiti equipment is popular with some people for home networking but is only suitable for more advanced users who like to mess around with networking equipment and willing to have separate hardware for router, switch, WiFi etc rather than all in one easier device.

ASUS spokesperson Jack Cheng told Ausdroid that full 1Gbps exactly will be very tough, considering there is some loss even from the WAN side. However, if we are targeting something between 900Mbps ~ 1000Mbps, then the following logic applies:

The users need Gigabit WAN and Gigabit LAN if users want to take advantage of Gigabit internet for one single device.

Wireless client on the other hand will be much more difficult. At the estimated effective Mac throughput of 65%, the minimum WiFi sync speed has to be over 1538.5Mbps for WiFi 5, and slightly lower for WiFi 6.

This is achievable with any of these 3 scenarios:

ASUS have conducted benchmarks in Singapore earlier, and can confirm if the above criteria are meet, 900Mbps+ internet speed can be achieved.

Here is some reference info about the theoretical bandwidth of different WiFi 5 and WiFi 6 options out there:

ASUS also advised which of their models they suggest for an NBN Gigabit connection:

Linksys also responded to our query and advise that:

Compatible with any modem/router on the market, the Linksys Velop systems can easily connect to existing NBN equipment, with easy setup via the Linksys App.

D-link responded with a correct but short answer:

All D-Link routers and modem routers are equipped with a gigabit WAN port so, technically yes, they are all built to receive gigabit transmission from an ISP’s connectivity.

That said, within the LAN (local area network), it will depend on a number of variables and conditions to determine if a user will receive gigabit connectivity, particularly if you are connected wirelessly.

If you are looking to get the most out of your NBN connection and move to one of these new upper limit speed plans check out the advice above and make sure all variables are taken care of before signing up. The advice above with give you the bes tpossible chance of getting close to that 1,000Mbps.

I have tried the 255/25 with Aussie Broadband on a HFC NBN connection. Speed was brilliant without any significant evening congestion. I am using an Asus RT-AC88U and it copes well with load with multiple users and devices. While working from home I reverted to the 100/40 as I needed the faster upload which unfortunately NBN do not provide on the 255 plan. I was not one of the lucky 7% of HFC customers that could access the 1000/50 plan.

how does one sign up to Aussie’s 1000mbps plan.

The only option i had was to upgrade to 100/40mbps. There weren’t any other choices?

I’m using an Apple Time Capsule as my ‘modem’ to connect to my AussieBB 1000/50 connection and am getting the speeds I am paying for.

Last edited 2 years ago by A Jaxom

Bit of misleading information regarding the uni d light. After a recent firmware update of the arris nbn modems, a green light now indicates a Gbe link and orange is 10/100Mbps

I’m sure it wasn’t meant to be misleading advice

I only have a NODE connection, max 35 …. paying for 50 to get that! This discussion is not useful to me…. – wish I had better, though!

Meanwhile I’m stuck on 26mb/s max regardless of the ISP thanks to the rubbish local infrastructure (FTTN, old copper, too many houses connected etc) and i live close to a major capital city!

One NBN tech and one ISP tech could not eek out any more speed than that! #FraudBand

Ubiquity as mentioned is quite popular and for a reason. They do have an all-in-one model available: the UDM (Unifi Dream Machine), which is a very suitable device for this scenario, so I’m surprised that is not mentioned as an option in this article.