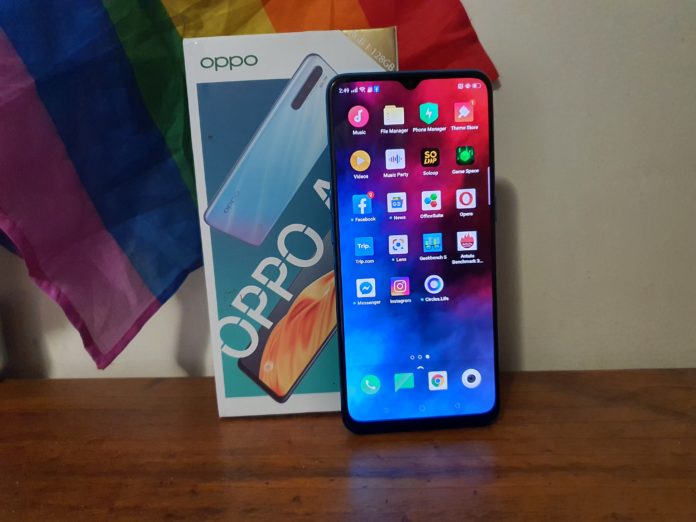 OPPO is continuing to bring great hardware to the mid and the high range markets. Having previously reviewed and owned OPPO branded devices, I have found them to be user friendly to a degree… ColorOS can be frustrating at times and makes me think of Samsung’s TouchWiz OS of years gone past which generally made the software feel heavy and not quite to westernised standards.

With their latest line up, the A-series, hope some high end design and specs to the mid range market and the A91 certainly does that. Something that has interested me given they are trying to take on a crowded market with the likes of Samsung with its own A-series but also Nokia, Xiaomi and its stablemates Realme and Vivo.

When we got the opportunity to review the OPPO A91, I was keen to see what the device brings to the market and how it stands up against the competition. So let’s have a look at the OPPO A91.

Opening the box was an interesting experience as the packaging reminds me of iPhone packaging but we are talking about an Android device. Holding the OPPO A91 in my hand, the device feels solid and perhaps a little heavy but despite this it is comfortable to hold in one hand.

The front of the A91 is the 6.4-inch FHD+ AMOLED which offers a 2400×1080 with a 408 PPI density and is made of Corning Gorilla Glass 5. There is a teardrop cut out at the top centre of the display which houses the 16MP front facing camera.

The right side near the centre houses the power button with the bottom of the A91 housing the speakers which are ok, but nothing to really crow about. They’re functional for speakerphone calls but that’s it. Next to this is the USB-C port, version 2.0, which is enabled to have rapid charging thanks to OPPO’s VOOC Flash Charge 3.0 with the supplied charger. VOOC 3.0 is able to charge this battery from empty to full in about an hour. If you’re in desperate need you’ll get around 50% charge in 30 minutes. An honourable mention goes to the 3.5mm audio jack, a dying feature but still welcomed by many users.

On the left side, you’ll find the volume rocker and above that is the combined SIM and MicroSD card tray. The inclusion of a second SIM slot would be welcomed by those who are after a single device, enabling them to only carry a single device covering work and personal applications.

The rear of the OPPO A91 is made from a polymer plastic shell which has been given a glossy, almost glass-like finish. Don’t be fooled though, it’s not glass and it’s very easy to mark with fingerprints or smudge marks taking the shine off the presentation.

It’s worth noting that OPPO supply a clear protective case in the box. It’s nothing special but is enough to protect your phone from scratches and small drops.

Powering the OPPO A91, is a Octa-core Mediatek MT6771V Helio P70 chipset which also includes a Mali-G72 MP3 GPU Processor. Whilst this combination isn’t going to give trail blazing power, it did ensure that the device ran quite smoothly the apps I tested.

There is also 8GB of RAM along with 128GB of onboard storage, which can be extended to 128GB via MicroSD and given the amount of storage that is already on board I doubt there would be much need for more storage given the availability of cloud storage in 2020 but its good that it is an extra option.

Battery wise, the OPPO A91 comes with a non removable 4025mAh battery which was able to provide close to an all day charge in some light to medium usage. With higher usage I did find that I would get to about 40-50% battery life by mid afternoon and was thankful there was the inclusion of the VOOC Charger which helped bring the battery life up to at least 100% within half an hour to an hour.

The only thing that perplexes me is why OPPO hasn’t included wireless charging into this device. Given there has been a somewhat renaissance in wireless charging over the last few years for at least high end device, with some medium mid range devices also slowly getting this feature, it would have been something that I would have liked to have seen included, but I guess the saying, beggars can’t be choosers on this one. Especially at work, I would have liked to be able to use my wireless charger instead of having to carry the charger around with me. In saying that, the device is a mid-range device and some corners need to be cut to make that price point — wireless charging was obviously one such corner.

The display is quite bright and the colours are crisp with these mainly put down to the inclusion of an AMOLED Display. Even outdoors the display is absolutely brilliant and bright enough with some adjustment of the display.

Of course the A91 comes with face recognition to help unlock the display and it is quite fast, in fact its more accurate and faster than the Note10+ face recognition. It isn’t the most secure face unlock though as I found that using a photo of myself can unlock the device – something to keep in mind for the security conscious.

The OPPO A91 comes with a total of four rear camera’s, which include a 48MP main camera that is defined as a 119 degree wide angle camera, an 8MP ultra wide camera, a 2MP black and white lens and a 2MP depth lens.

Night or low light scenarios is sadly where these cameras do have a little bit of an issue. Pictures taken in low light or even at night seem to include a bit of a grainy texture and noise.

Keiko being way to photogenic

In decent lighting situations I also found that the photos produced can seem brighter than usual.

Front facing, the OPPO A91 comes with a single 16MP camera which has enhanced AI features built in to ensure those selfie pics are absolutely top notch.

There’s a range of Features included for all cameras including Beautify, HDR, Panorama, Dazzle Colour (only available via Photo and Portrait modes), Filters, Flash modes, Night, Expert, Time-Lapse and Slow-Mo.

There is also in photo and video modes, similar features such as various camera filters and up to x5 zoom which is ok but you can lose some of the colour and volume at this level. Granted there is inbuilt video stabilisation which works a great but is also somewhat noticeable in some occasions.

Overall, the camera shots taken were great when using the standard mode but trying to use the 10X zoom can make the detail seem a little off and not as crisp in detail as in real life. Certainly in the night mode pics detail is far less crisp with quite a bit of noise and honestly I was a little bit disappointed with how the pictures taken in the night mode did turn out.

Like many other OPPO devices and tablets, the A91 runs Android 9.0 (Pie) with the OPPO UI, ColorsOS version 6.1. For me ColorOS has become a bit more user friendly but still has a way to go to be considered up there with the best Android user experiences.

That being said, I did find the ColorOS version installed on the device actually not too bad — it is a vast improvement over previous generations. Switching between apps was relatively smooth and I found it could handle pretty much anything I threw at it very well.

The interesting apps which are pre-installed are:

The only app that confuses me for its inclusion is OfficeSuite which is great as a one stop productivity app, but personally I use either Microsoft Office products or Google Docs as I am sure a vast majority of people do. I feel either the inclusion of these apps and services would be far more appealing and useful to users.

In all honesty, there is a lot to like about the OPPO A91 despite some of the flaws that the device has.

The inclusion of NFC to this OPPO device is a bonus given their history of exclusion of this. The exclusion of wireless charging, which does help keep the device price low, is somewhat disappointing but for a device sitting sub-$500 beggars can’t be choosers. This can be overlooked thanks to the inclusion of the VOOC USB-C fast charging solution.

I have to say, the OPPO A91 does offer some great specs and it does offer a lot at a compelling price to be worthy of consideration. If you are looking at a mid-range device this is yet another decent entry into that category worth a decent look at.

The OPPO A91 is available from JB Hi-Fi, Kogan, Bing Lee, Officeworks, Retravision, Vodafone, MobileCiti, Telechoice and Woolworths Mobile for $499 and is available in both Lightning Black and Blazing Blue colours.

Unfortunately, due to OPPO’s track record (or lack thereof) of regular security updates (leaving firmware updates for another rant), I will not be purchasing anything OPPO anytime soon. Tried them with the R15 Pro and got burnt. Why do all Chinese manufacturers concentrate on sales but don’t care about the after sale? Is market share really that important?