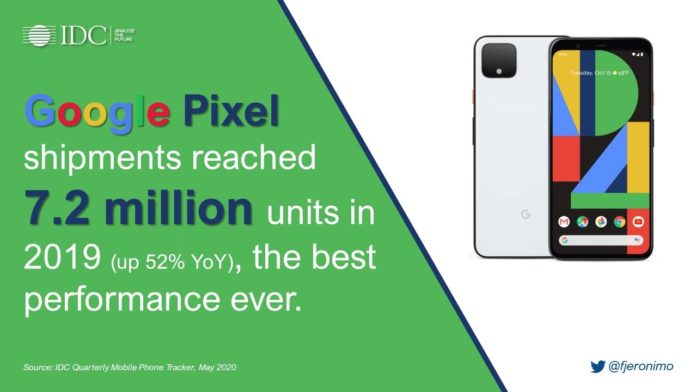 Google had of course hoped to sell Pixel smartphones by the millions (and millions) but their sales had apparently stagnated selling a fraction of other smartphones. According to the IDC though Pixel sales continue to grow with them shipping 7.2 million units in 2019.

An associate VP from the IDC tweeted out today nothing but praise for the Pixel line noting that its shipments grew 52% YoY — its highest volume ever –and although they now ship more units that OnePlus it is still far from reaching the Top 10 of smartphone sales.

. @Google continues to expand the #Pixel portfolio and sales are growing. In 2019 shipments grew 52% YoY to reach the highest volume ever, with strong performances in the USA, Western Europe and Japan. It now ships more units than @oneplus but it is still far from reaching Top10 pic.twitter.com/qY66isF9vN

Unfortunately the stat is a tad misleading though because it includes all phones in the Pixel portfolio, including the mid-range Pixel 3a — which he cleared up not long after. It is clear from this that the introduction of the Pixel 3a helped immensely in the growth in sales of the Pixel line.

The Pixel line is still nowhere near the “Top 10” list which is not surprising considering they only offer a couple of phones compared to the leading manufacturers Samsung and Huawei who offer a whole swathe of devices across a large range of prices. OnePlus have not offered a mid-range device for a long time so it is not surprising to see Google overtake them — it will be interesting to see how OnePlus compare now that they are launching a new mid-range OnePlus Z smartphone into India (and possibly other markets) soon.

The top 10 manufacturers sell a LOT of smartphones with OPPO sitting at number five shipping over 114 million units per year so don’t expect Google to break into that list any time soon, even as they expand into new markets.

It is clear that Google are continuing to sell more devices each year but the next 12 months will be telling with no extra (ie. new form factor or price range) devices on the horizon. There will be a new “a” series device and a new fully fledged Pixel but nothing that was not sold last year.

Hopefully Google can continue to grow and maybe one day produce a device that does it all and is able to match the other manufacturers in all things, especially the battery life.

I love how u guys bring OPPO in every article 🙂