Although bubble messaging has been in Android apps for a while but it was not officially supported by any particular API until Google introduced a Bubbles notification with Android 10 Beta 2 last year. It was enabled in the first developer preview of Android 11 this year with Facebook Messenger switching to this API a few weeks ago. Now it looks like Google will be enabling it for their Messages app in the next month.

In a post from the Official Google Account on Reddit, u/androidbetaprogram, Google have shared that Bubbles for Android Messages will be arriving through the beta program in the “next week or two”. The feature is available for all apps who implement it within their app so expect to see more implement it soon — hopefully manufacturers implement it in their messages apps as well. 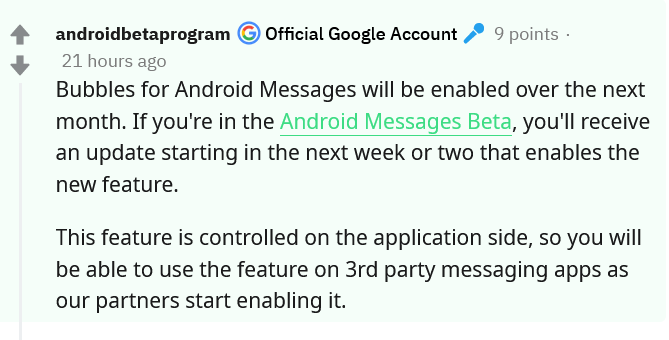 XDA Developers have shown off this new Bubbles working within Google Messages and it seems to act as you would expect it to — as we have seen so many other third party apps already implement it. The bubble appears on the side of the display with a preview of the message next to it. Tapping the bubble opens an overlay showing the entire message.

If the bubble is not interacted with the preview disappears only to be replaced with a notification dot signifying an unread message for that contact within messages. As per usual to close the bubble you drag it down to the cross at the bottom.

If you are interested in checking out the new Bubbles head on over and sign up for the Android Messages Beta program now.

looks very similar to the chat heads for facebook messenger 🙂

Not silly at all. It’s just the messages beta on any device apparently the way I read the reddit post.

It’s great to have options. However, this is one option that I have no interest in at all. I like my notification hidden nicely away in the notification drawer.