HMD’s Nokia smartphones have really shaken up the Android landscape, offering great specifications at a great price point, from budget to near-top end. It’s at the lower, budget end that Nokia smartphones really shine, though, and the Nokia 1 series phones have been at that ultra pointy end.

The Nokia 1.3 is the latest in these series of budget smartphones, and HMD’s use of Android Go makes the most of modest resources to deliver a decent user experience for the price of $169.

In short, it looks like any other Nokia smartphone, and more broadly, like any other smartphone – it’s a black slab from the front, a plastic back, and a fairly unremarkable 5.7-inch display with a tear-drop notch at the top. Unlike most smartphones, though, when you pick up the Nokia 1.3 it feels deceptively light; there’s not a lot of metal or glass going on here – it’s plastics and cheaper materials. However, this size and weight is instantly palmable – you won’t struggle to hold this phone one-handed, or lose it in your pocket. 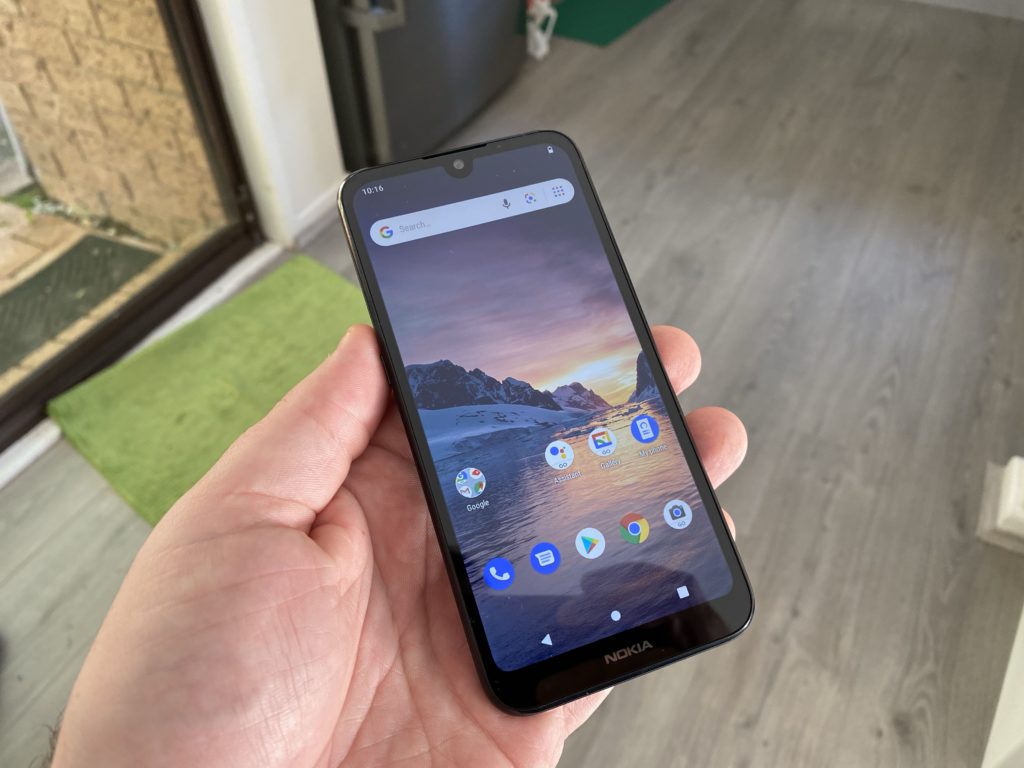 There are some other stand-out features too – for one, the battery is removable (and, out of the box, doesn’t come installed). This can be a bit tricky, actually, as removing the back to get the battery in is a bit fiddly. Fortunately, though, you’re only likely to do this once – when you set it up, pop your SIM in and insert the battery. After that, you may never do it again.

The other main thing about the look is the display – it’s a relatively cheap-feeling IPS LCD that looks just fine when you’re looking at it indoors from a fairly straight-on angle. However, take it outdoors, brightly lit areas, or look at it from the side, and the screen loses what finesse it once had.

While this is noticeable, it’s only because I went looking for it – for someone who is just going to use their phone as a phone (and not review it), frankly the screen quality is perfectly acceptable.

Other notable features including a headphone jack for those who’ve not made the move to wireless audio, a dedicated Google Assistant button on the left, and a Micro USB connector on the bottom (ew).

There’s no fingerprint sensor, and facial recognition is pretty simple, so your best bet at security on the Nokia 1.3 is a PIN or password, but you’ll be typing it in a lot. Considering the Nokia 1.3 has a Snapdragon 215 processor and just 1GB of RAM, the performance is rather snappy. Android Go makes an awful lot out of hardly anything, and these modest internals do boot the Nokia 1.3 along quite nicely.

I wouldn’t call it snappy, or powerful, but for what it’s intended to do, it does that well. It’s responsive, browses the web fine, checks your email and your socials without issue, and can play back media too. That’s about what this phone is designed to do, and it pretty much stops there.

This isn’t a phone for top-end (or even mid-range) gaming, filming 4K videos, or much else. With just 16GB of storage on board, you probably won’t be installing bucket loads of apps, or saving heaps of photos or videos; for the latter, at least, you may be able to avail yourself of Google Photos’ cloud storage … but budget phones shoot serviceable photos, not masterpieces.

The main reasons anyone buys a phone like HMD’s Nokia 1.3 are price and peace of mind – this is a phone that’s under $200, comes with guaranteed OS updates for 2 years, and goes all day. I’m happy to report that all of these are a big tick – as far as we know, at least.

Given the Nokia 1.3 will see Android 11 (Go Edition), you can feel comfortable buying this budget phone knowing it’ll get a decent upgrade. Most budget smartphones are released and forgotten, and HMD has differentiated the Nokia smartphone brand on this point – and done well from it. How long does it last?

With a big 3,000 mAh battery (and precious little that it needs to power), you’d expect the Nokia 1.3 lasts pretty well. It does – you can safely leave the charger at home with this one, as moderate usage will easily see you last the day (and into the next).

However, if you’re a regular phone fiend, you might find the Nokia 1.3 just can’t quite keep up. Media consumption – and video in particular – is quite power hungry, and if you watch an hour of Netflix to and from work (as many commuters do), you’ll find you’ve given the battery a big hit before you’ve done anything else.

It is, however, a cheap smartphone, and to expect much more of it probably isn’t reasonable.

If you are shopping in the budget segment, this is probably one of the better value options available; its sub-$200, with a big 5.7-inch display, and all-day battery life in most situations. For the price-sensitive smartphone buyer, that’s a good combination.

If you can spend a little more, you do get substantially more smartphone though. HMD’s Nokia 2.3 is an easy step-up, with full Android One (not the Go edition), a bigger battery and better cameras. It’s just $30 more.

Step up a little more and for $242 (at JB HiFi at the moment, on sale) you can grab realme’s C3 64GB with a 6.5-inch display, 5,000 mAh battery and triple rear-camera setup. The reality is the realme C3 is a significantly better phone, and not all that much more expensive.

However, if you’re looking for a great phone for your kids, grandparents, or you’re just not a mobile user and need something only to stay in touch, the Nokia 1.3 is an easy buy at $169. Find it at JB HiFi, online, or elsewhere.

“Considering the Nokia 1.3 has a Snapdragon 215 processor and just 1GB of RAM, the performance is rather snappy.”

Literally the next paragraph: